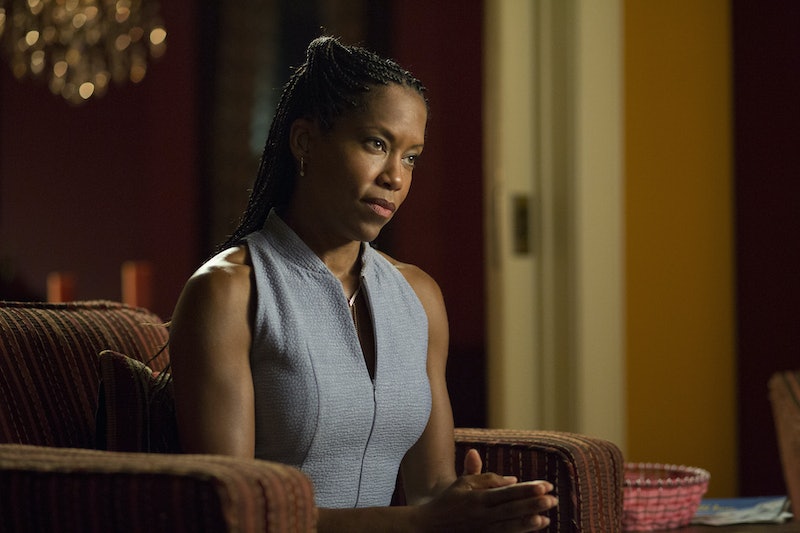 "Lens," this Sunday's episode of HBO's The Leftovers , may go down as the most generous in the show's history, when it comes to providing answers to some of the most puzzling, long-lingering questions. In short order, we learned the story behind the goat-slaughtering man and the wedding-dress-wearing woman: As many viewers suspected, these strange denizens of Miracle, TX, were superstitiously repeating the actions they took on Oct. 14, in an attempt to keep the effects of the Sudden Departure at bay. But, the biggest mystery solved in this week's episode was about the bird in the box that Erika Murphy dug up in the Season 2 premiere.

We got the answer after Nora stole the new and improved questionnaire from her colleague at the Department of Sudden Departures. Desperate to find out whether her neighbor Evie Murphy had really "lifted" — and whether she was directly responsible — Nora ran through the list of questions with Erika. Eventually, the mysterious matter of the seemingly immortal sparrow came up. Earlier in the episode, we had seen Erika repeat the experiment, digging up another box... only to find the bird dead inside. Whatever magical properties Jarden had appear to have worn off. But, before they did, Erika is afraid those properties may have contributed to her daughter's disappearance.

Growing up, Erika's grandmother used to tell her that their town was "chosen," referring to it as the "Jarden of Eden." She also told her granddaughter an old wives' tale that "proves" Jarden is special: You take a bird, put it in a box, and bury it in the ground. Three days later, you dig it up; if it's still alive, you make a wish — and that wish will come true. Erika never believed her grandmother... until Oct. 14, when two percent of the world's population disappeared. From everywhere but Jarden. Then she knew her grandmother was right.

One month ago, right around the beginning of Season 2, Erika was planning on leaving John. As she was contemplating her future, she saw an injured sparrow. So she picked it up, put it in a box, buried it in the ground, and waited three days. Then she dug it up — which we witnessed in the season premiere — and she made a wish. What did she wish for? She wanted her kids to be able to cope without their mother; she knew Michael would get by on the strength of his faith, but she was worried about Evie. So Erika wished that her daughter would be OK without her... and that night, Evie vanished into thin air.

Erika may not have wanted her daughter to be "lifted," but she did want to be able to leave her husband without the guilt of abandoning her daughter hanging over her head, so she feels responsible anyway — just like Nora feels responsible for wishing ill on her own family the morning they all Departed. Is there a correlation between wishing someone was gone at the moment of the Departure, and that person actually Departing?

The mystery of the bird in the box may have been solved this week, but in true Damon Lindelof fashion, even more questions were raised. Where did Tommy Garvey go? Why was it a "big mistake" for Kevin to confess his hallucinations to Nora? And, of course, we still have the question of what exactly happened to Evie. The characters may be starting to take it for granted that she did, in fact, Depart. But I'm not so sure the audience should be assuming the same. The Leftovers probably has a few more tricks up its sleeve in its final four episodes of the season.

More like this
Paul Mescal, Man Of Mystery
By Samantha Leach and Heather Hazzan
Mike Flanagan Teases 'The Midnight Club' In This Exclusive, Creepy Clip
By Grace Wehniainen
'The Rings Of Power' Episode 6 May Reveal Sauron’s Identity
By Grace Wehniainen
What’s New On Netflix: Ana De Armas’ 'Blonde' & A Nick Kroll Special
By Arya Roshanian
Get Even More From Bustle — Sign Up For The Newsletter