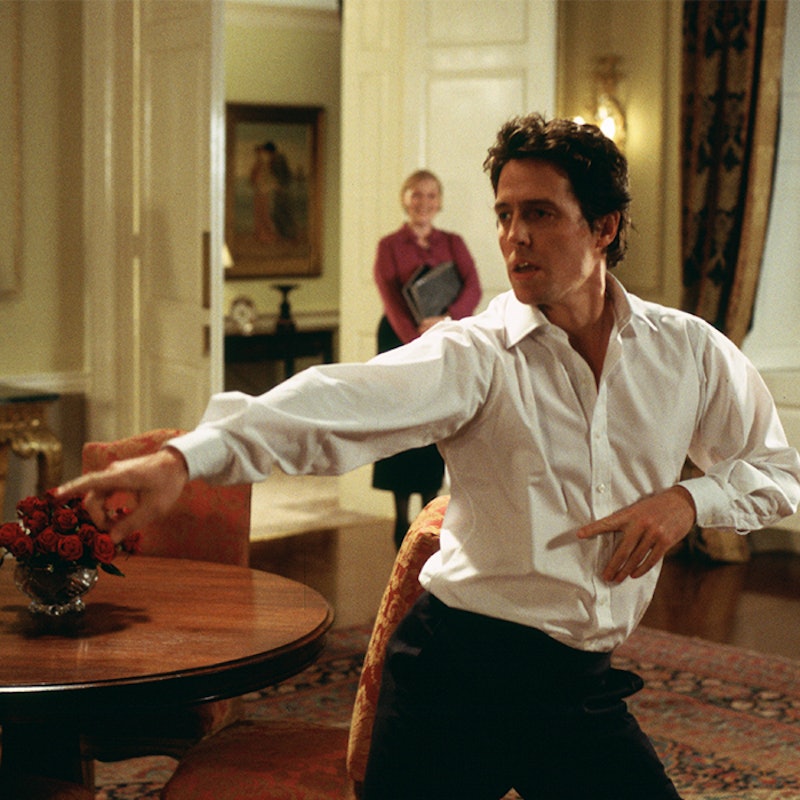 With the holiday season upon us, it's time to break out my annual viewing of Love Actually. The 2003 British romantic comedy has become a Christmas classic that I seriously cannot go without watching every November or December — and, admit it, you feel it, too. But now that the film is more than a decade old (gasp), I began wondering how Love Actually would be different now, in 2015, because a lot has changed in the years since the movie was released. For reference, the film came out before Facebook was born and camera phones became the norm. Today in 2015, we can't go several minutes without checking social media on our phones or posting photos to Instagram. Ah, how far we've come.

And all of that would certainly change Love Actually , a movie that is timeless, yet rooted in the simplicity of the early aughts. To refresh your memory, the romantic holiday film tells the intertwined love stories of several couples, including the Prime Minister David (Hugh Grant) and staff member Natalie, writer Jamie (Colin Firth) and his Portuguese maid Aurelia, a love triangle between friends, and a washed-up singer named Billy Mack aiming for a No. 1 song on Christmas. While all of those stories don't sound outdated, there are small aspects of them that are — but I can fix that without changing too much of the beloved movie

Here's what would would be different in Love Actually in 2015.

1. Mark's Card Scene Would Be Done Over FaceTime Or Text

One of the movie's most iconic scenes is when lovelorn Mark (Andrew Lincoln) shows up to Juliet's (Keira Knightley) door and declares his silent love via posterboard, so his best friend — and Juliet's husband Peter (Chiwetel Ejiofor) — doesn't hear. But in modern times, Mark wouldn't have to even leave his apartment — he could just deliver the message via FaceTime or even text message. Sure, it's less romantic, but the intent is still the same.

Jamie and maid Aurelia fall in love despite not speaking the same language. When they part, they learn each other's language — Jamie is shown in the movie going to a school to take classes in Aurelia's native Portuguese. These days, Jamie and Aurelia could just fire up Google Translate to communicate and then learn each others' language with DuoLingo, or really, any other language app.

Compact discs are so early '00s. Now it's all about streaming music using the service of your choosing, so that leaves me for a loss at what kind of music-related gift Harry (Alan Rickman) would get Karen (Emma Thompson) for Christmas. Maybe an iTunes gift card? No matter what, it won't compare to the expensive necklace he buys for would-be mistress Mia — and that's as much of a diss in 2015 as it was in 2004.

4. Sam Would Be Really Good At Garage Band

In order to aid stepson Sam's music dreams, Daniel (Liam Neeson) buys him a drumset, so the boy can impress American classmate and crush Joanna. Now, who needs a drumset when Daniel could just invest in a copy of Garage Band for Sam and he could make his love several kinds of sweet beats. It would be less noisy than real drums, especially if Daniel also gets his stepson some headphones.

5. Sarah Would Be Good At Gchatting Karl

Sarah (Laura Linney) has a longtime crush on sexy coworker Karl, but she's too nervous to actually talk to him. In 2015, there's a way to solve that problem: Gchat, or any other messaging apps. Even texts would suffice. But in that case, although they'd have had a bond via words, she'd still probably be too shy to talk to him and person.

6. Sarah's Brother Would Text Her All The Time

One of the most frustrating scenes in the movie for me is when Sarah and Karl are about to finally hook up and Sarah's mentally ill brother Michael calls to interrupt, ruining the mood. In 2015, Michael would probably text rather than call all the time. Sarah could also easily put her phone on "Do Not Disturb" mode or on vibrate and go about her sexy business. But hey, family is family.

7. Colin & Tony Would Get An American AirBnB

Brits Colin and Tony take a fantasy trip to the United States to meet American girls and arrive in Milwaukee without a place to stay. They get lucky — in more ways than one — because the women they meet invite them to stay at their bachelorette pad. I think a more modern version of this plotline would include the guys finding an extravagant AirBnB in the Midwest.

8. Billy Mack Could Reach No. 1 Using YouTube Views, Too

As we all learned with Drake's "Hotline Bling," it's more than just sales that contribute to No. 1 singles in 2015. Music and video streams are also accounted for when determining which songs top the charts (but not Apple Music — Billy, take note). In addition to Billy telling fans to buy the song, he'd also be encouraging them to stream it and watch the video on YouTube. After all, that video makes for some great GIFs, even in 2015.

9. The Prime Minister Could Look Up Natalie's Address

At the end of the movie, Prime Minister David goes door-to-door on a street searching for Natalie's home. While it is funny, you'd think the PM of the UK would readily have access to addresses of his staff, and I'm hoping that in 2015 he finally does. If not, I'm sure he could piece together which house was hers from her Instagram or Facebook photos.

Daniel mentions that his ideal woman would be model Claudia Schiffer and meets a woman who looks just like her (and actually is her in real life) at the end of Love Actually. In 2015, he wouldn't have to wait so long or depend on fate to meet the woman of his dreams. He could just find her while browsing one of many online dating sites.

Sam works hard on the drums to impress Joanna (Olivia Olson) and with good reason — at the end of the film, we learn that she's got some crazy good pipes for a young kid. These days, she wouldn't have to hid in obscurity. I'd like to think her American parents would encourage their music prodigy daughter to sing for some videos that they put on YouTube and she'd instantly become a sensation — especially her cover of "All I Want For Christmas Is You" (above). Naturally, Ellen DeGeneres would invite her on Ellen and she'd get a recording contract, pronto.

But see, the essence of the movie still remains — Love Actually is all around us, always.