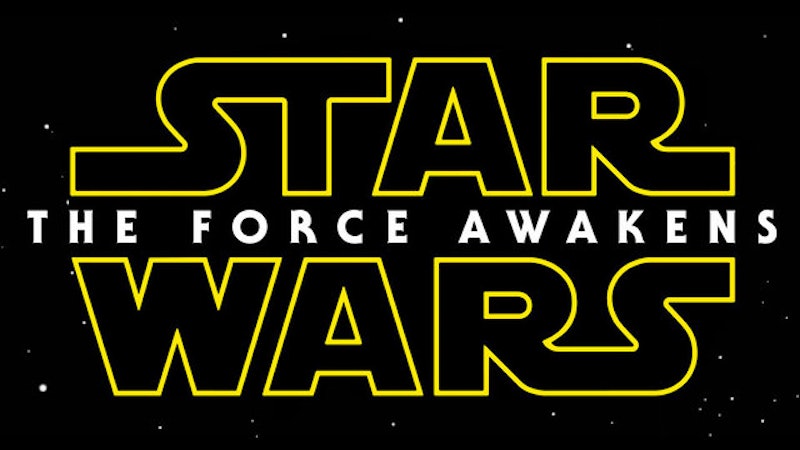 If you are anything like me, the Star Wars: The Force Awakens trailers and teasers have left you with so many questions that your mind has gone into a complete Tie Fighter tailspin. I have such overwhelming excitement for the film's release in December, it has started to impact my life. My friends have had to implement a "no more talking about Star Wars while drinking cocktails" rule to try and curtail my nonsenical rambling. But like my favorite Millennium Falcon pilot and resident bad-ass Han Solo, I believe rules are meant to be broken. So my quest for Force Awakens trailer clues and Easter eggs continues.

The greatest thing about this new Star Wars film (besides it giving more Star Wars, duh!) is that director J.J. Abrams is all about paying homage to the original Episode IV-VI films. Whether it's in the way a shot is framed, iconic imagery, or a character's costuming, Abrams has added in a ton of references for die hard fans to discover. And oh, discover I did. After utilizing the think-tank that is the Star Wars online community, I have finally been able to properly dissect the tons of clips and scenes that have been released in the different Star Wars trailers so far, and I am finally ready to share my findings. True, most of these "findings" are pure speculation, but this stuff sure is interesting...

This is the first shot of the full-length trailer. It is an image of one of the film's protagonists, Rey, as she opens a hatch. Upon closer examination, Rey's scavenger helmet looks very similar to an old Stormtrooper's helmet. In particular, the eye piece shares the same size, shape, and color of the stormtrooper helmet. With the hand-stitching shown around the lens, it would appear that Rey has made her headpiece from a discarded stormtrooper helmet. A character who makes her own clothing has to be super self-sufficient.

After her introduction, Rey is seen repelling into a cavernous body of a decaying battle ship. Chat rooms across the Internet are speculating that the ship is an Emperial Star Destroyer (AKA the ship shown in the opening of Star Wars: A New Hope). This theory is bolstered by the buried Tie-Fighter in the bottom lefthand corner of the shot. This wreckage is surmised to be from the Battle of Jakku, which is depicted in the new Star Wars: Battlefront game.

From the trailer, we learn that Finn is looking for purpose after becoming disillusioned about his role as a stormtrooper. After he crash lands on Jakku, he overlooks a desert cliff in a scene very similar to Obi-Wan Kenobi and Luke Skywalker seeing a desert cliff in Star Wars: A New Hope. For Obi-wan and Luke, their journey to this town leads them to Han Solo. It is safe to assume that Finn will meet Rey at the town shown here.

What Is Kylo Ren Doing?

In a don't-blink-or-you'll-miss-it moment, you can see Kylo Ren doing something to Poe Dameron. Some think it is a new version of Dark Vader's force chokehold and others theorize Kylo Ren is attempting to read Poe's mind. Either way, this scene seems important.

Listen For The LeitMotif

In opera, leitmotifs are short musical piece meant to be associated with a particular person, place, or thing. In the trailer, this scene and voice-over from Rey is accompanied by the song "Han Solo and The Princess," AKA Han and Leia's love theme. Coincidence? I'm guessing not.

This shot shows the classic warp style from the original Star Wars films morphing into a more modern (read J.J. Abrams) styled hyper-speed. It is an important thing to note for fans, because it shows that even when updating the special effects, Abrams is still paying homage to the original trilogy.

In the scene showing Finn and Poe interacting as the fighters prepare for battle, a blue driod can be seen in the background. Aided by the release of action figures for the new film, it is known that this droid is PZ-4CO and it is a female robot who is a personal assistant to Princess Leia. Very, very interesting.

Is That You, Luke?

This scene from the original teaser seems to show Luke Skywalker. It shows a cloaked man with a robot arm with R2D2, so it seems very likely that this character shown is Luke. It is very interesting and suspicious that beside this one-second clip, Luke Skywalker has been noticeably absent from the trailers and the Star Wars: The Force Awakens poster. Where you at, Luke?

Why Is Rey Crying?

This scene has been shown in almost every trailer, teaser, and television spot. It shows Rey crying over a body. We don't know exactly who it is. Some have surmised it's Chewbacca, Han Solo, or the new character Finn. The fact that it is getting such heavy play adds weight to its significance.

The Stormtroopers in the original films were not known for being particularly smart. This trend seems to continue, as this scene shows a stormtrooper taking on a X-Fighter. Dumb idea, dude.

This Is Not Tatooine

While the new television trailer shows Rey living on a planet that looks a lot like Tatoonie (the home planet of Luke Skywalker), this planet only has one sun. Producers have confirmed this, and Rey is said to live on a planet called Jakku. Even if the planets are different, this shot is an exact replica of the original and clearly pays homage to the first Star Wars film.

Putting greater significant on the earlier use of the Princess Leia and Han Solo's theme song, in the latest television trailer, the narrator says, "I have lived long enough to see the same eyes in different people" while clips of Rey and Han Solo are shown. Producers have said that Rey's last name has purposely been kept secret. Is Rey possibly Han Solo and Princess Leia's child? I guess we won't know until Dec. 17.

While Star Wars: The Force Awakens' premiere date seems so far away, J.J. Abrams and company have jam-packed the teasers and trailers with such rich detail that I'll have plenty of things to keep me busy until December.