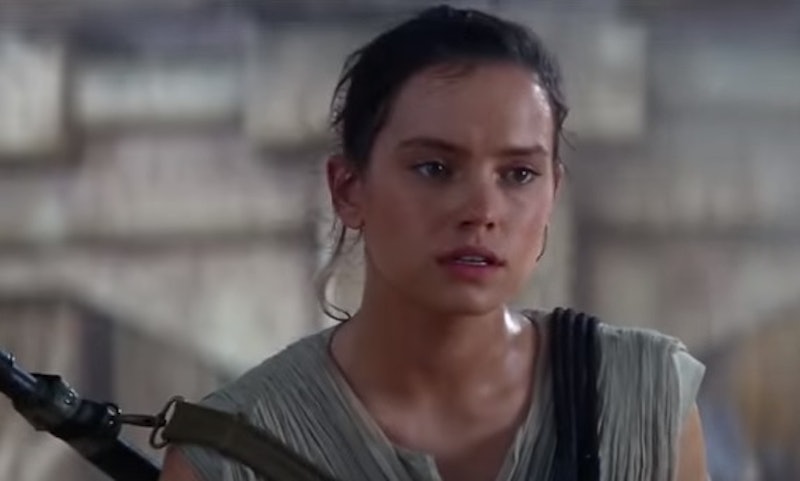 History may be repeating itself in the new Star Wars: The Force Awakens teaser. The brief 30-second spot designed to air on television doesn't have all the droid action and stormtroopers of the full-length trailer, but it does drop some major hints about the next generation characters. Even the presence of Han cannot distract from the focus on Rey and Finn. Rey squeezes in some major butt-kicking time in the teaser, but the biggest reveal comes in the form of a voiceover from none other than Oscar-winner Lupita Nyong’o (who is set to play Maz Kanata, an alien pirate), hinting at a blood connection between the old generation and the new.

"I have lived long enough to see the same eyes in different people," Maz intones over a cool shot of Rey that tellingly cuts to Han. "I see your eyes. I know your eyes." The way the trailer is edited heavily suggests Rey is Han's daughter, but that is way too easy, right? As much as everyone loves the roguish Han, Star Wars was first and foremost Luke's story. For that reason, it would make more sense for the young heroine to be the daughter of the mysteriously absent (and possibly evil) Luke. There's nothing ongoing stories like better than symmetry, and if Luke does turn out to be the biggest bad of them all, it would be fitting for his daughter to be a rebel leader. If you need more evidence, Rey certainly fights like a Skywalker.

In addition to physically kicking butt, Rey is also shown flying a ship and becoming buddies with Finn (whose parentage is also in question). The 30 seconds reinforce the connection between Rey and Finn with a brief timeout for one kickass aerial battle and another scene featuring BB-8 — which is good news because there is no such thing as too much BB-8.

The only flaw in the Rey is Luke's daughter theory is the teaser fails to reveal who Maz is talking to. Is she staring into Rey's eyes as she speaks or Finn's? Is she talking to someone else entirely? There are just too many clues pointing toward Rey being a Skywalker for Maz's speech to be a coincidence (or a metaphor), but it might be too soon to officially welcome her to the family.

Rey has all the makings of a flygirl, that much is for sure. Whether he's her uncle, father, or random new best friend, Han should be impressed. As for the rest of the teaser, it was mostly designed to make you geek out. Lightsabers, sky battles, and adorable droids are all on display. You won't be any closer to knowing who is on the dark side once you watch it, but I promise you will be even more enamored with Rey and her infinite space skills.