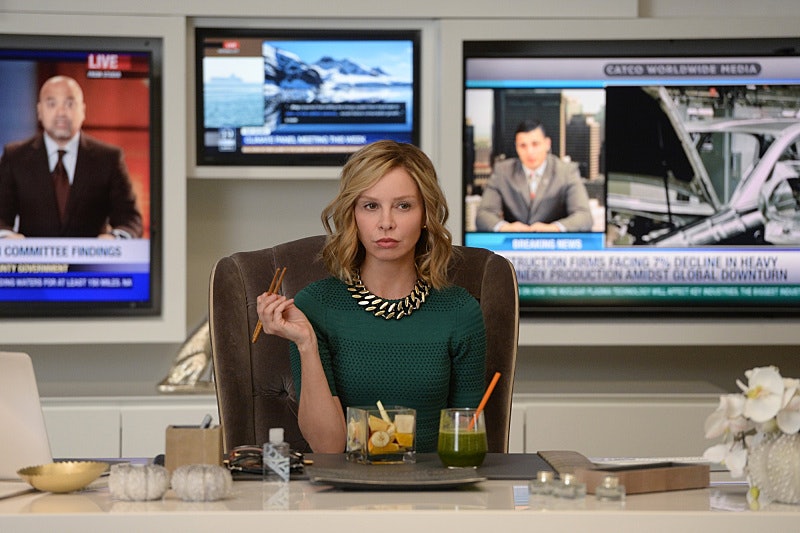 Calista Flockhart's streak of being a professional badass just won't stop. After playing the iconic role of Ally McBeal, she moved on to tugging our heartstrings in the earnest and soapy Brothers and Sisters. She never really slowed down after the series ended in 2011, taking on a number of diverse roles, raising her son, and being married to Han Solo — I mean, Harrison Ford. She has been crushing it for decades and Flockhart's latest role as Cat Grant on Supergirl proves the best is yet to come. On the CBS series, Kara's boss, the powerful and confident CEO of CatCo is more Miranda Priestly than Perry White. But what is Cat Grant like in DC Comics? Fans who are only familiar with Flockhart's take on the media mogul may be surprised to learn about her origins.

On Supergirl, Cat is a force to be recognized with, and we've only seen the beginning of her character as the show prepares to air its third episode, "Fight of Flight." Still, it's already become clear that the TV version of Cat is very different from her comic book counterpart.

The character first appeared in the 1984 edition of the Adventures of Superman as a reporter from Los Angeles who moved to Metropolis to become the new gossip columnist for the Daily Planet. She was a single mother raising her son, Adam, as well as a recovering alcoholic. She is perhaps best known for being flirtatious, and was actually introduced to be a conflict in the Clark Kent/Lois Lane relationship. Cat and Clark dated for a while, but ultimately broke up due to his feelings for Lois. Meanwhile on the series, Cat is running an entire media corporation, and at this point, there's no sign she'll ever meet Superman, let alone begin a romance with him. One thing that Supergirl did retain from the comics, however, is Cat's role as a single mother, as TV Line reported that Pan's Levi Miller will play her son.

Let's hope this storyline changes for TV, as things get pretty dark for Cat in the comics when her son is kidnapped and later killed by the Toyman, which sends her (quite understandably) on a downward spiral. She does eventually return to reporting and serve as an antagonist to Supergirl, who she feels doesn't quite take these alien threats seriously enough.

This is all a bit ominous, since on Supergirl, Jeremy Jordan plays Winslow Schott, who becomes Toyman in the comics. There have already been many changes made to the show (like much of Cat herself), so there is no way of knowing if it will follow this dark source material. Still, I hope Kara keeps a close on Adam, just in case the TV and comic book versions of Cat start to have more in common.