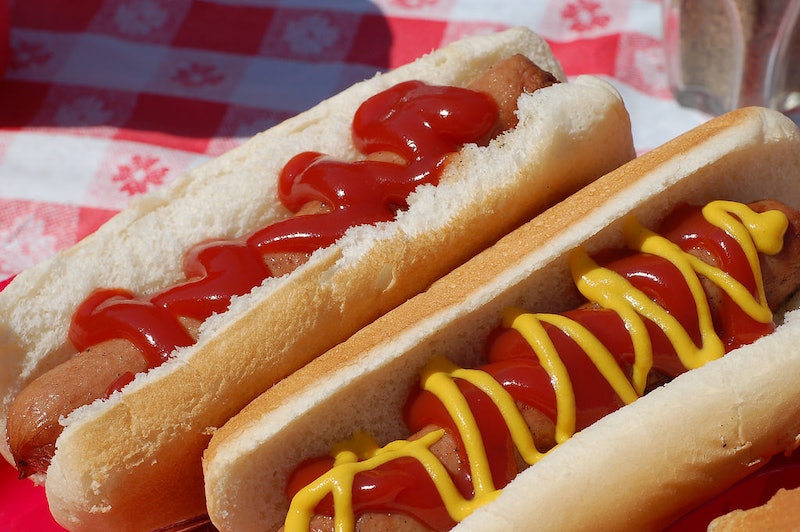 It's an age-old question that has plagued foodies since the dawn of time (well, maybe not that long, but you get what I mean): Is a hot dog a sandwich? The good news is that we finally have an answer — and the bad news is that it might not be what you were hoping for. Either way, though, at least we finally get to lay this query to rest, right?

On November 6, the National Hot Dog and Sausage Council — which, yes, is a thing that actually exists — released its official stance on whether or not a hot dog qualifies as a sandwich. And the answer is…drum roll, please…hot dogs are not sandwiches. Rather, wrote the NHDSC in a blog post, the hot dog is “truly a category unto its own.” Said NHDSC President Janet Riley, “Limiting the hot dog's significance by saying 'it's just a sandwich' is like calling the Dalai Lama 'just a guy.' Perhaps at one time its importance could be limited by forcing it into a larger sandwich category (no disrespect to Reubens and others), but that time has passed.” For the curious, a sandwich is defined by the Oxford English Dictionaries as, “An item of food consisting of two pieces of bread with meat, cheese, or other filling between them, eaten as a light meal.”

Of course, it's hard to ignore the fact that this pronouncement came down to us from an organization devoted specifically to the great and mighty hot dog; originally established in 1994 as the American Meat Institute, the NHDSC “serves as an information resource to consumers on questions related to quality, safety, nutrition, and preparation of hot dogs and sausages. The Council also celebrates hot dogs and sausages as iconic American foods.” Could this merely be an attempt to further glorify the foodstuff known for its presence at backyard barbecues and baseball games? Perhaps. Perhaps not, but, well…I'm just saying it's a possibility, is all.

So if a hot dog isn't actually a sandwich, what other foods might not be what they're pretending to be? I did a little digging in order to find out. Here's the verdict on five more “are they or aren't they?” options.

In 2006, a Panera location at the White City Shopping Center in Shrewsbury, Massachusetts, attempted to have a new Qdoba location blocked on the grounds of a clause in the bread and sandwich chain's contract. The clause stated that Panera would be the only sandwich shop in the shopping center — and Panera argued that burritos, quesadillas, and other tortilla-based foods were, in fact, sandwiches, making the Qdoba a no-no. However, Superior Court Judge Jeffrey Locke ruled that “a sandwich is not commonly understood to include burritos, tacos, and quesadillas, which are typically made with a single tortilla and stuffed with a choice filling of meat, rice, and beans.” The Qdoba was allowed to stay.

According to Merriam-Webster, one of the definitions of a hamburger is, “A sandwich consisting of a patty or hamburger in a split typically round bun.”

3. Crepe: Not a Sandwich

This one kind of surprised me, largely because I have never once thought to liken a crepe to a sandwich — crepes are more like pancakes than anything else. But in case there was any question, the readers of sandwich blog Panini Happy determined in 2011 that no, a crepe is not a sandwich. Just FYI.

In 2013, the Chicago Tribune's Bill Daley took on the reader query, “What's the difference between a calzone and a stromboli?” in his column, The Daley Question. His answered cited The Deluxe Food Lover's Companion's definition of a stromboli, which reads as follows: “A calzone-like enclosed sandwich of cheese (usually mozzarella) and pepperoni (or other meat) wrapped in pizza dough.” I'm unclear on whether this also means that things like Cornish pasties are “enclosed sandwiches” (I've always considered them hand pies), but do with that what you will.

5. Big McChicken: Not a Sandwich

Never seen a Big McChicken before? That's probably because it's not an official McDonald's offering — it's a secret menu item that you may or may not be able to convince your local McDonald's to make for you. Consisting of several chicken breasts with hamburger patties between them, it has been determined not to be a sandwich by the Tumblr blog Is It a Sandwich? By extension, I'm guessing that KFC's Double Down is also not a sandwich.