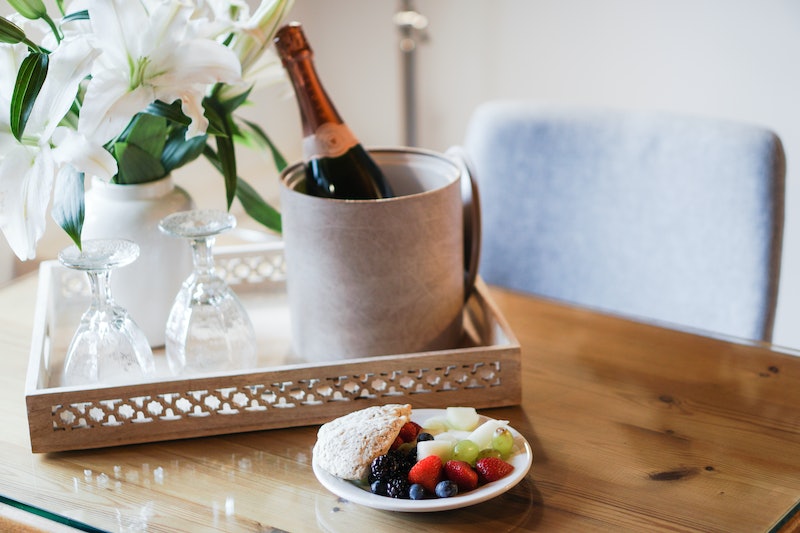 It's a Monday worthy of celebration if you're a fan of bubbly: New research published by academics ar Reading University concluded that drinking champagne could help prevent onset of Alzheimer's disease and dementia. There are a couple of caveats, of course — there always are — but if you'll excuse me, I will be leaving my desk as soon as possible and drinking as many mimosas as I can get my hands on during my lunch break.

Here's the thing, though: First, the study isn't actually new; and second, we don't know whether the findings hold true for humans yet. As Cosmopolitan points out, the study was done on rats in 2013. The researchers found that phenolic compounds found in two kinds of grapes, Pinot Noir and Pinot Meunier, boost learning and memory functions in the brain and guard against brain diseases; and since champagne is frequently made from these kinds of grapes, well, that's your easiest way to get some into your system. The researchers believe that drinking three glasses of champagne a week might set your cognitive functioning up for future success. Again, though, we're talking about rats here — as a spokesperson from the Alzheimer's Society said to the Evening Standard, the study is interesting, but a lot more testing is needed to confirm these results. We can't say for sure whether champagne actually helps prevent Alzheimer's in humans until we've actually, you know, conducted a study with humans as the subjects.

The news is perhaps unsurprising, though, given the wide variety of wine-related health benefits research has supported. While we wait for researchers to further develop results on their study, here are five other potential health benefits of different kinds of wines, because I will find any excuse to drink more of it (and I know you will, too).

1. A Glass of Merlot Might Be Equivalent to an Hour of Exercise

Yes, you read that correctly. According to research published in the Journal of Physiology, a natural compound found in wine can enhance training and performance, as well as mimic exercise itself. I am literally never going to the gym again.

People who drink one to three glasses of wine per day actually outlive people who don't drink wine at all. So next time someone bothers you about your third glass, tell them you're doing it for life.

3. It Protects Your Teeth

The grape seed extract found in red wine has been found to combat plaque and other bacteria which wreaks havoc on your teeth. So while you may temporarily have a wine-stained smile, you will have much whiter whites in the long term.