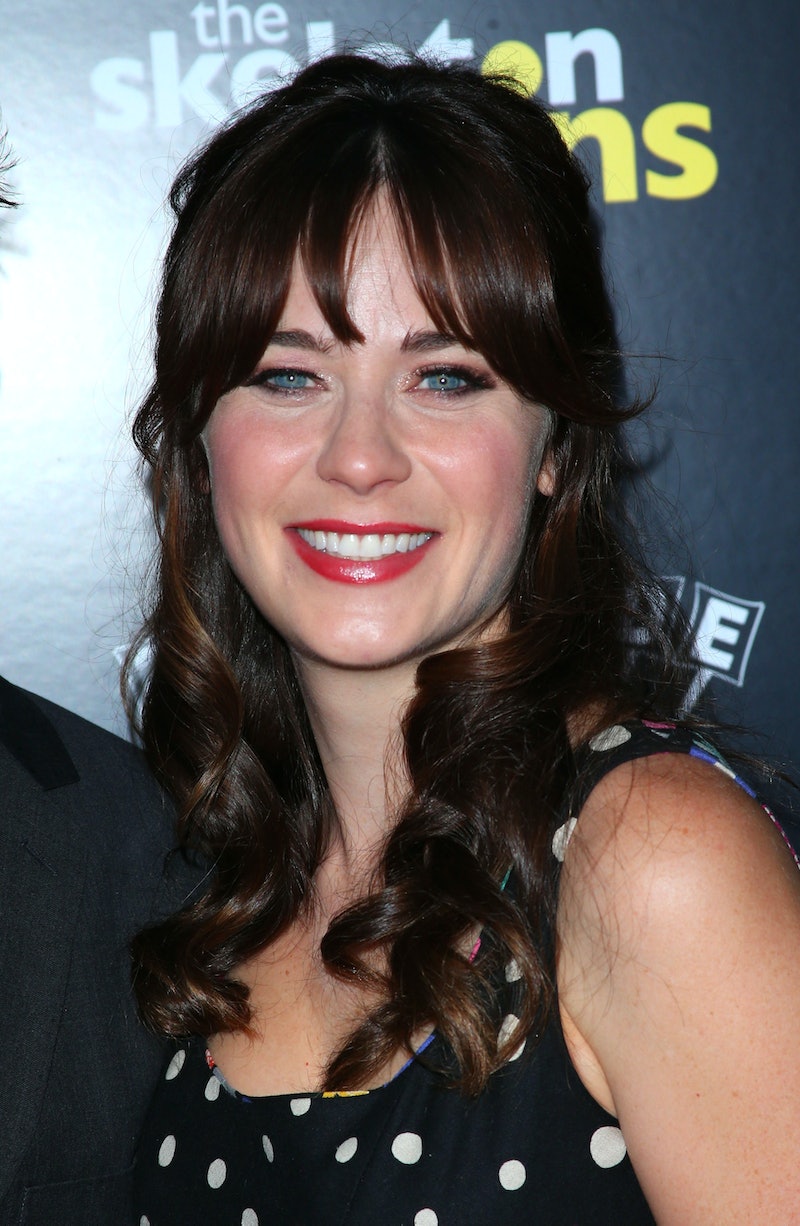 Zooey Deschanel has been full of surprises lately. Not only did she very quietly marry Jacob Pechenik in practically the same breath that she welcomed her daughter, Elsie Otter, into the world earlier this year, but now, the New Girl star has even more changes in store. According to Us Weekly, Deschanel has converted to Judaism since her new husband practices the faith. She has yet to confirm the news herself, but Bustle has reached out to Deschanel’s rep for comment.

This news is especially interesting since Deschanel has said she doesn't "attach" herself to any single religion in the past, but the magazine's source says she's pretty happy with her decision... and just in time for the holiday season! As someone who is so in love with Christmas that I'm basically Santa Claus, I couldn't imagine giving up my favorite holiday, but I can appreciate that the new family would want to unify themselves in this way. After all, not everybody is as into Chrismukkah as Seth Cohen is.

But Deschanel is far from the first celeb to convert to Judaism after getting married, especially in recent years. Plenty of others have made the switch before her, dating all the way back to Marilyn Monroe when she married Arthur Miller. And hopefully, their process of converting was a little easier than Charlotte's was on Sex and The City when she married Harry. Hopefully.

Before Fisher married Sasha Baron Cohen, she converted to Judaism in 2007 so that they could have a Jewish wedding. At the time, she said, "I would do anything — move into any religion — to be united in marriage with him. We have a future together, and religion comes second to love as far as we are concerned." Sounds like as good a reason as any to me.

Although Barrymore hasn't made her conversion official — at least, according to what she's talked about publicly — she's been practicing Judaism since marrying her husband, Will Kopelman, in a traditional Jewish ceremony. And since then, they've raised their daughters, Olive and Frankie, in that same tradition. "It’s a beautiful faith and I’m so honored to be around it,” Barrymore told The View in 2013. “It’s so family-oriented … The stories are so beautiful and it’s incredibly enlightening. I’m really happy.”

In a 2013 interview with the WTF Podcast, Banks talked about forsaking Christmas for Hanukkah in honor of her husband, Max Handelman, when they tied the knot. Like Barrymore, she never officially converted, but she did take a class about the religion and is now "as Jewish as [she's] ever going to be."

Trump decided to convert when she married Jared Kushner in 2009, and it sounds like it's working out pretty well for them. "It’s been such a great life decision for me," she told Vogue. "I am very modern, but I’m also a very traditional person, and I think that’s an interesting juxtaposition in how I was raised as well. I really find that with Judaism, it creates an amazing blueprint for family connectivity."

Deschanel is definitely in good company. And who knows? Maybe, to celebrate her new holidays this year, she'll finally share a photo of Elsie. I'm dying to find out if she has bangs.