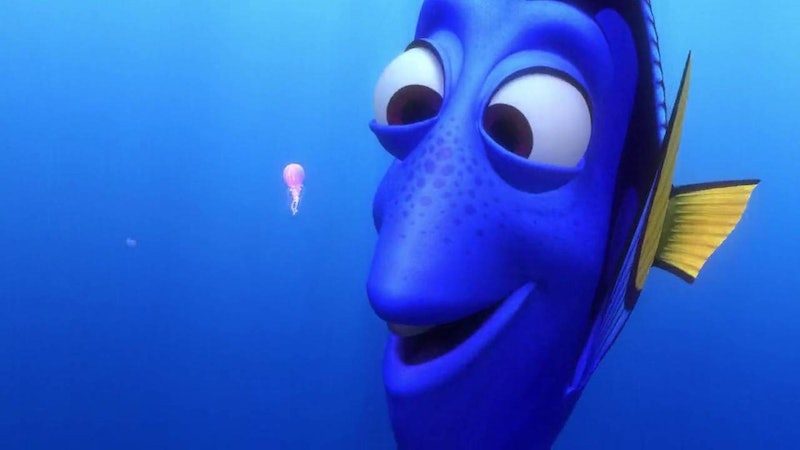 She's back, and hasn't stopped swimming yet. Monday Disney and Pixar released the poster for Finding Dory , and, though simple, people are freaking out. Mind you, it's been ballpark 12 years since Finding Nemo came out, and, while there have been sequels for just about every 3D film imaginable (Cars 2, anyone?), Nemo and its cast of fishy friends (not foes) have been long neglected. So this poster is a reminder that we're getting a welcome return to the water. However, I can't help but wonder, why exactly does Dory need to be found?

Details about Finding Dory were released earlier this year at Comic Con Experience Brazil, and the plot actually promises an out of ocean experience to find out the secrets of Dory's past (unknown to Dory herself because of her short term memory). According to ComicBookMovie.com:

The story of the movie will follow Dory, Merlin and Nemo as they set off on a journey to find about Dory's past and parents. The movie will be mainly set in the Marine Biology Institute of California, a huge complex of rehabilitation for marine life. Dory learns that she was born and raised there and was released in the ocean when she was a kid.

Splendid. So Dory's journey is more of a story about identity than anything else, something she truly deserves. But, when I hear the term "Finding Dory," I feel as though my mind gets taken to another direction. In fact, I feel as though this film could've gone a few different ways.

Check out the poster in all its glory, and then contemplate all the other ways Dory could need finding. Such as...

1. Dory, True To Form, Just Keeps Swimming And Ends Up In The Wrong Part Of the Ocean

It's up to Marlin and Nemo to find her, because you can't rely on Dory to remember to Mapquest her way back home. It's my most literal guess.

2. Dory Endures A Rough Divorce And Decides To Do The Whole Eat, Pray Love, Thing

It's finding yourself in the best, most absolutely extravagant way.

3. Dory Starts A Cult And Her Fishy Followers All Discuss How Empty Their Lives Were Before They "Found Dory"

The sharks get especially invested in her new age teachings. Spoiler alert: this doesn't end well for anyone.

4. Dory Gets V.I.P. Access Into This Really Fire Club, And Marlin And Nemo Have To Go Find Her Among The Crowd

The problem is that Dory answers all Marlin's "DORY WHERE U AT" texts with "WHO DIS?" Ugh, it's gonna be one of those nights.

5. Dory Is Up For A Big-Fish Job And The Recruiters Have To File Through Her Social Media Presence, Which Is Virtually Non-Existent

Or rather, it looks as though she started a few profiles, but they're only filled with short, half-formed ideas. Although, incidentally, she's pretty big on Twitter.

6. Dory Goes Out To Pick Up Some Thai Food For Marlin And Nemo And Never Comes Home. Then, Upon Seeing A Slew Of "Missing: Dory" Posters, Goes On The Hunt To Find The Lost Fish

A mirror would resolve this whole plot real quickly. Still, it's important that she's getting out there and having new experiences.

7. All This, Or She Could've Been Also Kidnapped To Be A Pet For This Little Monster

Regardless of the story, I can easily say that I'm psyched to go adventuring with Marlin, Nemo, and of course, Dory.