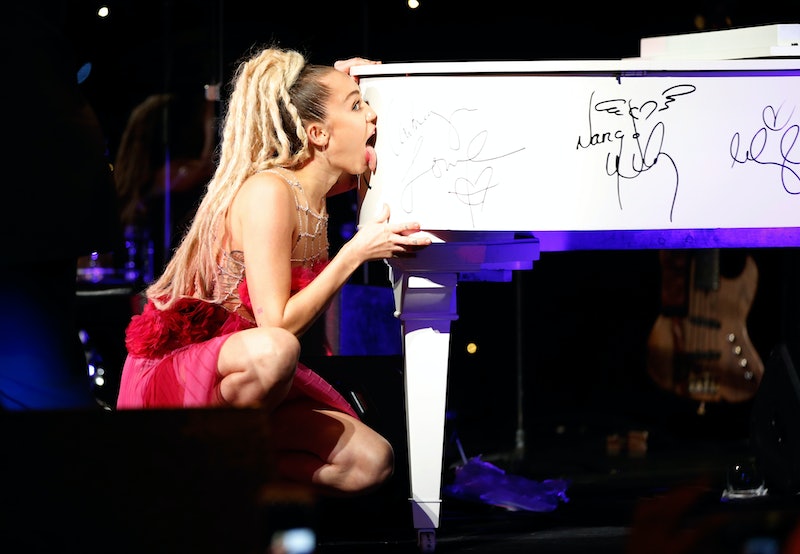 Like with all celebrities, the surface can often hide the humanity that is behind all of that glitz and glamour. Especially when that glitz and glamour is made up bondage-inspired clothing and a tongue hanging halfway down to her chin. But, contrary to what Miley Cyrus’s outward persona and appearance might suggest, this celebrity has a heart of gold, and it’s not for the sake of personal gain. Take for instance the piano that Miley Cyrus licked to entice more people to bid on it. The piano was apart of an auction at an LGBT Center where Cyrus was being honored with a Vanguard Award (for all of the amazing work she has done with the Happy Hippy Foundation to support the welfare of LGBT youth, BTW), and the saliva-soaked thing ended up selling for $50,000.

I mean, yes, that’s a public gesture, but it’s not the only big-hearted thing Cyrus has done to help others. It turns out that the singer has used her position (and her bank account) to make a serious difference in the world on a number of occasions. So much so that it’s clear that she’s not just doing it for publicity. And, in true Cyrus fashion, there have been a few bizarre ones.

1. She Had Jesse Helt Accept Her VMA

In 2014, the singer had Jesse Helt, a 22-year old man who is homeless, accept her Video Music Award. Helt took the moment in the spotlight to accept the award on behalf of “the 1.6 million runaways and homeless youth in the United States.” The moment was poignant and powerful and is just one example of Cyrus using her platform for good.

2. Partnering With A Rock And Roll Legend

In 2015, Cyrus partnered with Joan Jett to create the Happy Hippy Foundation, whose main goal is to serve homeless LGBT youth and other vulnerable populations. To celebrate the launch, Cyrus hosted a concert in her backyard. Talking about making the cause personal.

At an amfAR LA Inspiration Gala in 2014, Cyrus dropped $300,000 on a photograph in a charity to support the American Foundation for AIDS Research. Later in the night, she also gave $200,000 more. For giggles, I’m assuming. And because, clearly, she’s an incredibly generous person.

4. She Played “Wrecking Balls” For Charity On The Ellen DeGeneres Show

Cyrus and DeGeneres competed to push a ball across the floor with a… ahem… thing dangling from between their legs. In the end, ULTA Beauty donated $10,000 to the Breast Cancer Research Foundation for the stars’ phallic efforts.

5. She Traveled To Haiti

Cyrus has made multiple trips to Haiti to work with the Starkey Hearing Foundation. While there, Cyrus helped to distribute and fit hearing aids to more than 400 Haitians, and the images of her dressed down and working the children she helped are really incredible.

And you thought Miley Cyrus was about dead petz and booty shaking. Little did you know she has been working tirelessly behind the scenes to use her pop power for good.