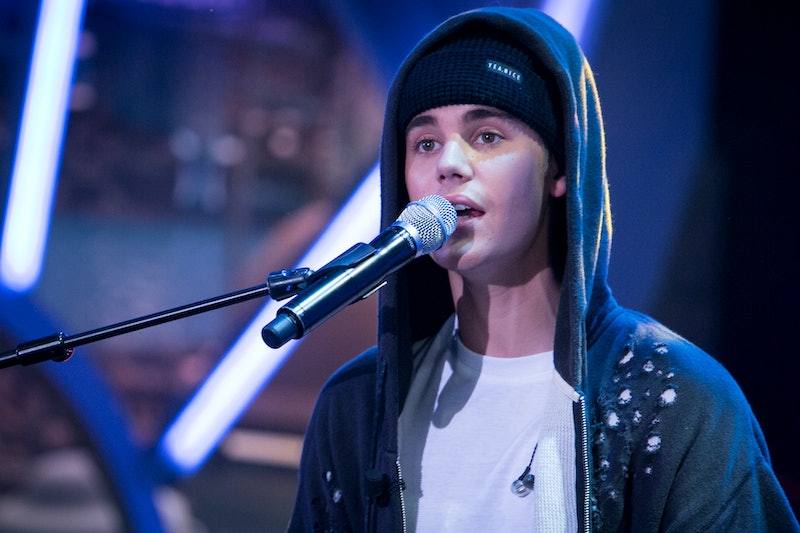 With less than a week to go until the world can listen to Justin Bieber's Purpose, the singer has been working hard to promote the project. He even revealed which Purpose songs are about Selena Gomez. Now fans can listen to two new tracks: "Love Yourself" and the Halsey collaboration "The Feeling."

Most of the tracks we've heard from Bieber as of late have a strong EDM influence. (Not surprising, giving that Skrillex is a frequent collaborator.) However, "Love Yourself" finds Bieber returning to his acoustic roots — sort of. It's not that bare bones, but it is a refreshingly stripped-down track that highlights the singer's smooth vocals. Perhaps this is because "Love Yourself" was reportedly cowritten by Ed Sheeran.

The lyrics speak to Bieber's maturity and the lessons he's learned without being a cliché. "My mama don't like you and she likes everyone," he sings. "And I never like to admit that I was wrong / And I've been so caught up in my job, didn't see what's going on / And now I know, I'm better sleeping on my own." One of the biggest signs of entering adulthood is being happy alone — and knowing when someone else is bringing you down. Bieber flawlessly addresses both of these topics in "Love Yourself."

"The Feeling" is the dreamiest of Bieber's Purpose tracks. While the production on the rest of the album is an EDM-infused evolution from his previous R&B influences, "The Feeling" takes this a step further. Despite the lush, polished vibe of the track, it ties in well with the other tracks. Halsey's vocals complement Bieber's well as she sings, "Am I in love with you? Am I in love with you? / Or am I in love with the feeling? / Trying to find the truth, trying to find the truth / Sometimes the heart is deceiving."

With songs like "Sorry" and "What Do You Mean?" on the album, there's some serious undercurrents running throughout it. However, "The Feeling" adds a shimmering lightness that's a welcome levity. For example, Bieber croons, "You give to me / Everything, anything that I could dream / At least that's what it seems / Could it be? I don't know what's come to me." It's a perfect, yet mature, way to describe the sparks of meeting someone new. In fact, maturity is one of the links that makes Purpose so cohesive — and it's fantastic. You can listen to "Love Yourself" above and "The Feeling" below.

More like this
Justin & Hailey Bieber’s Relationship Is “Unbreakable” After Their Two Health Scares
By Bustle Editors
Twitter Is Freaking Out Over Rihanna’s 2023 Super Bowl Halftime Show Announcement
By Stephanie Topacio Long
Even If She Tried, Beth Ditto Couldn’t Stay Away From Music
By Ivana Rihter
Everything To Know About Taylor Swift’s 10th Studio Album, 'Midnights'
By Grace Wehniainen and Jake Viswanath
Get Even More From Bustle — Sign Up For The Newsletter