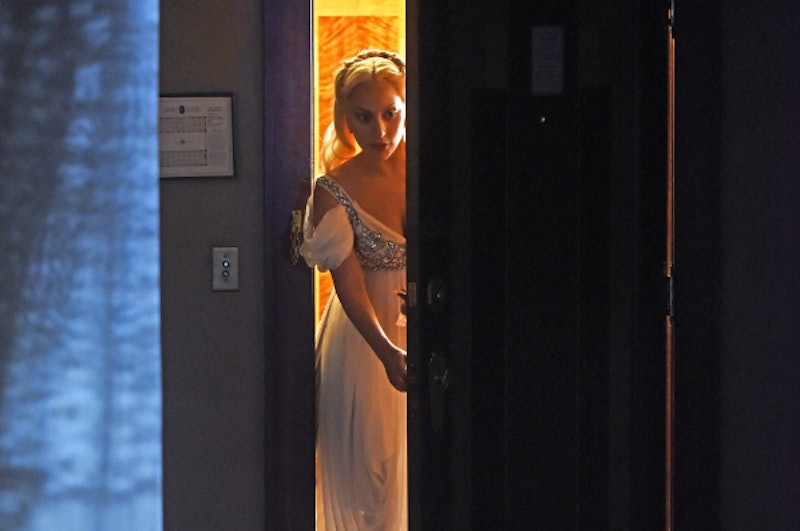 The Hotel Cortez may not be the safest place to stay the night, but there's no denying that its residents are just as intriguing as they are downright terrifying. Such is the case regarding Lady Gaga's AHS: Hotel character, The Countess. After all, she may be a vicious killer whose prone to drinking her victims' blood, but as her recent interaction with Liz Taylor has demonstrated, this woman isn't beyond experiencing human emotions. She has a heart. Now, whether it's still beating or not may be up for debate, but that doesn't take away from the fact that she does possess the ability to love, especially in regards to children. Could this be because The Countess gave birth to a baby herself on AHS: Hotel ? Given how little we know about her checkered past, I'd say it's certainly not out of the realm of possibility.

As I'm sure many of you have seen by now, images have surfaced of a very pregnant looking Lady Gaga filming AHS scenes right outside of Murder House. And while many viewers (myself included) have been quick to jump to the conclusion that The Countess was visiting Dr. Charles Montgomery for an abortion (something that he came to specialize in during the 1920s), it could also be possible that our lady (virus) vamp decided not to go through with it or ended up just seeking medical advice from the doctor and nothing more.

So let's just say for a second that The Countess decided to keep the baby. Then why haven't we seen/heard about it so far this season? Well, maybe we have, but we just didn't realize it at the time. What if the baby is actually "the thing in Room 33?" This week's AHS episode promises to finally reveal the identity of whoever (or whatever) is living inside of that room and given how nothing exists in the Cortez without The Countess' say so, it would make sense if she's somehow tied to this resident in a profound way.

Perhaps The Countess became infected with the virus at some point throughout her pregnancy, so she went to visit Dr. Montgomery to see if he could detect anything wrong with the child. And maybe he did, but The Countess decided to keep the baby anyway and ended up giving birth to something that's been locked away inside of the Cortez ever since. We've seen how dangerous children can become once infected with the virus. (Remember that insane epidemic from last week?) Maybe infants are even more volatile.

This above image from this week's episode shows The Countess coming into what appears to be a hotel room to visit a sleeping child. Could this be Room 33 and the child she once carried inside of her — unable to age any further than the day it was born? Granted, pictures by themselves can be misleading at times (this could just be a flashback), but that does't mean there isn't any truth to it. There's a reason Gaga's character seems obsessed with collecting young children and turning them into vampires. And maybe it all began with her very own flesh and blood. Something tells me we'll find out soon enough…