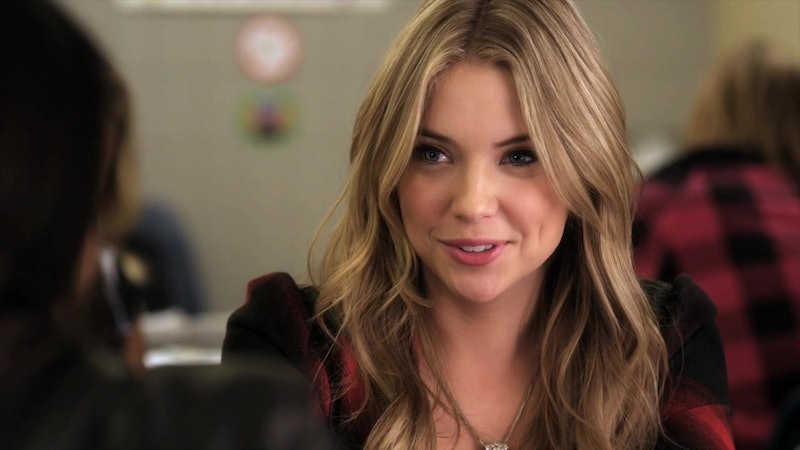 If you've been watching Pretty Little Liars since the very first A text, then you know how much the constant torture, threats, and funerals have had a serious impact on our girls. Emily, Spencer, Aria and Hanna aren't the same people that they were before "Ali's body" was found in the backyard, and for good reason: they've been through hell and back. While all of the girls have gone through drastic changes, there's one Liar who might not understand the person she was just two years prior, and that's the scrappy, fashionable Hanna Marin.

We've never not adored the squad's blonde, but Hanna has become ever more lovable over the years. Call it the Hannasance: this girl only gets better with age. (And she certainly knows a whole lot more vocabulary words now.) Hanna went from a wannabe to a Queen Bee desperate to keep her popularity despite the obvious issues that came along with her reign, and it took an entire season of being tormented by A for Hanna to realize that maybe it was better to just do Hanna. Now our girl is fiercely independent — but still very, very fierce.

So what would Hanna have done in Season 1 of Pretty Little Liars she wouldn't be caught dead doing today? Here are just a few examples...

1. Shoplift Sunglasses (Or Anything Else)

Remember when Han had a bit of a sticky fingers problem? She did it to dress fabulously, but in Season 6 she would never take such casual risks. She may steal the occasional car (sorry, Lesli Stone) but unless A was somehow pulling the strings, she'd never pick up a pair of Versace sunglasses without paying for them.

Sean was such a boring dud that no one ever suspected him of being A. There's a reason why the fandom flocked to Caleb so quickly: Hanna's other options weren't exactly interesting.

Sure, Mona and the Liars are on good times now, but Hanna is definitely a whole lot less comfortable spilling her secrets to her former BFF in Season 6. Mona may have had a mental breakdown, but one doesn't exactly forget that she once held Hanna's shoplifting problem at eating disorder over her head as Original A.

Remember when Hanna's biggest issue was whether or not she would win Homecoming Queen? Yeah... when you're kidnapped and locked in a demented dollhouse for weeks, you tend to prioritize your life a little differently.

Hanna was still "motivated" by Ali's awful shame tactics to avoid food, which only led to binge-eating and other dangerous behaviors down the line. In Season 6, if Hanna wants cheesy fries, Hanna just orders cheesy fries — because there's no shame in the fry game.

Ali may have been "dead" in Season 1, but Hanna still saw her as a beacon of popularity and everything else that she wanted for herself. It took a few years of confidence-building to realize that Ali was actually pretty bad news for her self-esteem, and though Ali and Hanna remain friends, Hanna sees her an equal, not someone to look up to.

The earrings. The shades. The Real Housewives of Beverly Hills hair. It's all so, so much, and while Hanna looked fab, she definitely tones down the fab today.

As I just proved, Pretty Little Liars' Hanna just keeps getting better. Who knows how amazing she'll be after a five year time jump?