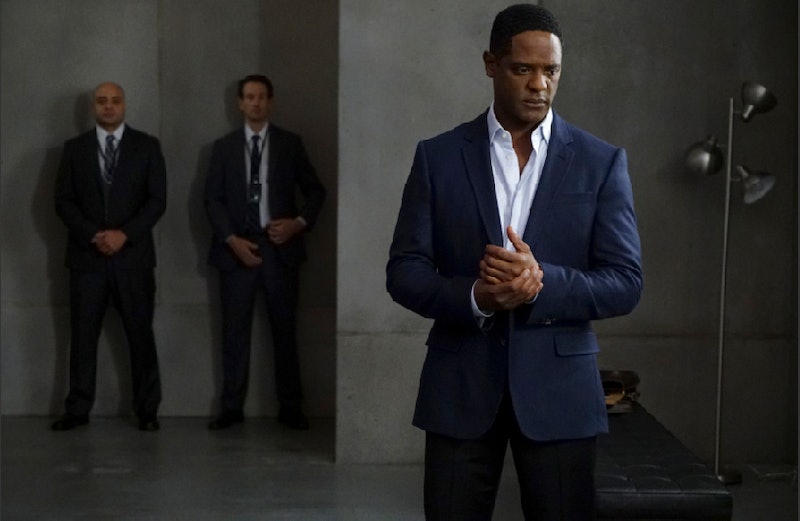 She'd just returned to active duty when Agents Of S.H.I.E.L.D. dropped a bombshell on Melinda May in last Tuesday's episode, "Among Us Hide..." Her ex-husband Doctor Andrew Garner is Lash, the bloodthirsty and monstrous Inhuman the agents have been tracking for much of the season so far. Lash has a vested interest in killing his fellow Inhumans, though he does seem to be quite picky about it. Andrew's position as sort of an Inhuman counselor within S.H.I.E.L.D. surely came in handy for him to seek out Lash's targets. But what are Lash's motivations for killing the Inhumans he kills and sparing the ones that he spares? And how long has Andrew been hiding this secret on Agents of S.H.I.E.L.D. ?

Season 2 ended with some ominous aquatic foreshadowing, as Skye sent the Quinjet holding Jiaying's terrigen crystal cargo hurtling into the ocean. The crystals, which activate latent Inhuman powers in humans with alien DNA, affected a school of fish that were caught and condensed into the kind of fish oil pills that you can buy over-the-counter at any drug store. How many fish oil pills can you squeeze out of a school of fish? Well, that's a gross question and I have no idea what the answer is, but it seems like Andrew was one of the lucky winners to purchase a contaminated jar.

The fish oil reveal seemed significant at the time, and S.H.I.E.L.D. had yet to follow through on its consequences. I like the idea that something so otherworldly could be found in something so everyday, and even more so that it would convert one of the most calm and collected characters on the show into a monster. Andrew seems like the kind of guy who takes care of himself. I suspect he had added the fish oil pills to his supplement routine prior to his tropical couples trip with Agent May. While they were looking into starting up their relationship again, his Inhuman powers probably showed themselves. Andrew freaked out and disappeared, but only long enough to get his transformations under control. How did he manage that? Did someone help him? Or was his professional expertise enough to guide him through the growing pains so many other Inhumans have dealt with?

Basically, finding out that Andrew is Lash raises more questions than it answers. What's his game, anyway? Daisy and Mack suspect that Rosalind's lackey Banks is their guy, because the A.T.C.U.'s hostile attitude towards Inhumans seems to fit the profile. Lash, on the other hand, has had plenty of chances to taking Daisy out, and hasn't. Is he sparing her because of personal reasons? Or does he still need her as an information source? Andrew is keenly attentive to any news of the whereabouts of Lincoln, that's for sure. If, like in the comics, Lash is some type of zealot that deems Inhumans either worthy or unworthy of life, then how does he decide? Those answers are coming, the showrunners promise. Jed Whedon, Maurissa Tancharoen, and Jeffrey Bell told Entertainment Weekly that Lash's game plan will become clear.

We will definitely learn his motivations,We hope to explore some gray areas morally, as we are wont to do. You will eventually come to understand what drives him and possibly sympathize with his position.

I don't know how much I can sympathize with any character who'd hurt Melinda May like that, but Agents Of S.H.I.E.L.D. can feel free to try me.