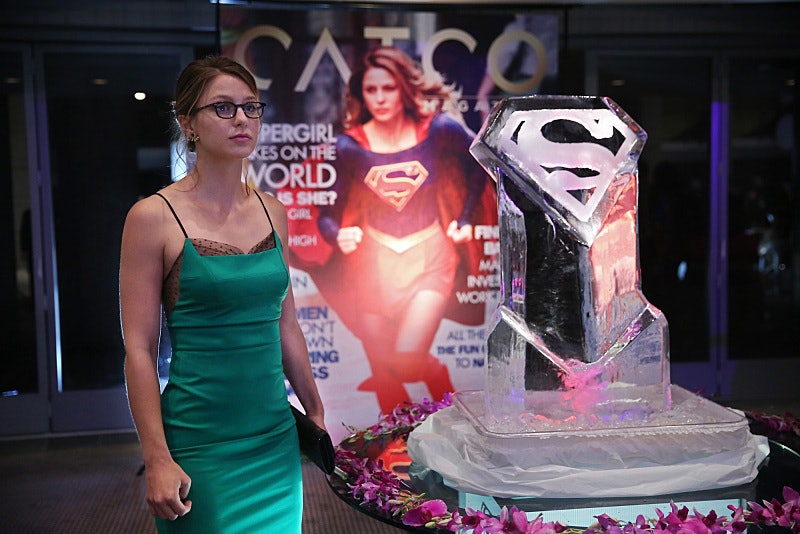 Family is tough, but I don't think it gets more stressful than trying to make a name for yourself as a vigilante and then having your more established vigilante cousin come in and save the day. Not only did Superman show up on Supergirl , but they admitted that Clark Kent is his alter ego and broke poor Winn Schott's brain in the process. We did not see or hear from Clark Kent directly, but he was there. Unfortunately, the situation was less delightful for Supergirl herself.

The Man of Steel made a few cameos in the episode before his silhouette swooped in to rescue Kara from a sticky situation. First, in her interview with Cat Grant, Kara let slip that she and Kal-El are cousins. Cat used intentionally sexist questioning to trick Kara into admitting that Superman is her cousin — such as asking her if she was thinking about starting a family. Do we think Cat Grant supports the #AskHerMore campaign? Kara angrily responded that her cousin never had to answer questions like that, and just like that, their relationship was made public. Oops.

As a result, a Superman villain named Reactron came after Supergirl. After their first altercation, the man's suit was damaged, and he kidnapped Maxwell Lord to fix it. No disrespect to exclusive fans of DC Comics, but as a Marvel fan this felt like Iron Man versus Iron Man. Maxwell Lord could be described as a "genius billionaire playboy philanthropist," and Reactron could be described as having an arc reactor in his chest. Kara wanted to save Lord on her own, but James called in the big man to assist her.

Kara was upset that her friends didn't believe in her, and worried that this meant more negative attention was going to be drawn to National City. It didn't help that Cat Grant's millenial-bashing draft had predicted that something like this would happen. On the other hand, it was one time. Superman saved Kara one time. I think she's going to be okay. Plus, little does she know that her Aunt General Astra already considers her more of a threat than her cousin.

Will we see more of Superman on Supergirl? I kind of like the way the show is handling their relationship. Superman is such an iconic character, that casting an actor in that role could distract from this entire series. At the end of the episode, Kara got an instant message from "Clark," and the two made up. Precious! This is Kara's story through and through, and there are a lot of ways that Superman can be a part of it without ever having to show his chiseled face.