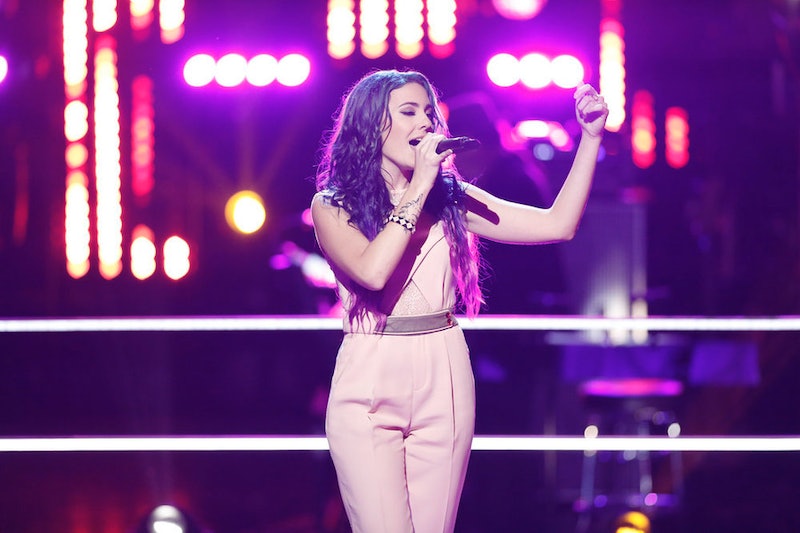 As if The Voice didn't already have enough elements to keep up with, they just added one more. Each coach can now bring back one eliminated artist to their team in the Live Playoffs, which is a pretty cool twist. This season has seen SO much talent that it just seems right that the coaches are able to bring back one contestant they wish hadn't been sent home. The first lucky "comeback artist" pick of the season is Ellie Lawrence to Team Gwen. Lawrence lost her Knockout Round to Braiden Sunshine, but now it's time for her to reclaim her spot on Team Gwen with a well-deserved second chance.

Lawrence is truly one-of-a-kind on this season. With incredible stage presence and a unique voice, it's a shame that she was eliminated in the first place. Her ska style sets her apart, but it also works against her. Lawrence's voice appeals to a very niche audience. This made it difficult for her to win over the coaches in the early rounds because they were looking for the artist that appealed to the widest audience, and she just isn't it. Luckily for Lawrence, though, the decision is in the hands of the audience now. If enough people watching from home believe in her, then she can definitely make it through a few more weeks. After such an amazing, fun performance and triumphant return tonight, there's no doubt that Lawrence will be safe for at least one more week.

The new "comeback artist" feature definitely works in Lawrence's favor, but what about the other contestants? Obviously it is a disadvantage to them because the contestant pool is just getting bigger and they're competing against artists who they've already beat. Existing contestants could go home in place of comeback artists, which may be a bit unfair. On the other hand, though, wanting to beat the comeback artists may motivate the existing contestants to deliver stronger performances in order to stay. Either way, this new twist is certainly an exciting and I can't wait to see how it plays out this season.