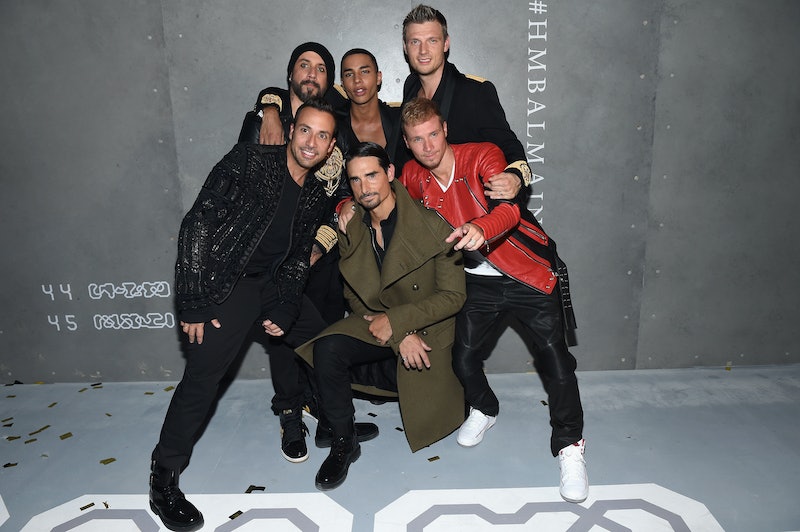 Is it 2002, you guys, because I’ve just seen all five Backstreet Boys sitting in the same room together, and it was completely awesome. Okay, fine, so they weren’t singing silky tunes or getting into any funky fresh dance grooves. Wait, that’s a lie—Nick was certainly getting down! That’s why the other guys were there, in fact. The Backstreet Boys came to support Nick Carter on Dancing With The Star s. How nice and fun was that? It’s always cool to see family, friends, and former contestants in the audience of Dancing With The Stars, but who would have thought that a whole boy band would have been there. All of NSYNC didn’t show up when Joey Fatone was on Dancing With The Stars. In fact, Joey was even there tonight. What are you doing up there, Joey?

Anyway, it’s easy to cheer for Nick and his partner, Sharna Burgess. She has really molded Nick into a good dancer (though he wasn’t the best dancer in Backstreet Boys, because that was totally Brian Litrell, who was born with a heart defect and why are you staring at me I just know things about the Backstreet Boys okay?) into an excellent dance. He got his first perfect score last week, and Sharna and Nick are making up for lost time and basically murdering every dance.

Nick said that it meant a lot to him to have the guys sitting in the audience for him. They’ve all been through a lot together—growing up, getting famous, dealing with the fame, drug abuse, etc.—and the Backstreet Boys are basically Nick’s family (no word on where his brother, Aaron Carter, of “Aaron’s Party (Come & Get It)” fame was). Was AJ’s crazy hat a good luck charm? Why does AJ always have crazy hats on? No matter the reason, I think the presence of the Backstreet Boys really helped Nick dance one of his best dances tonight.