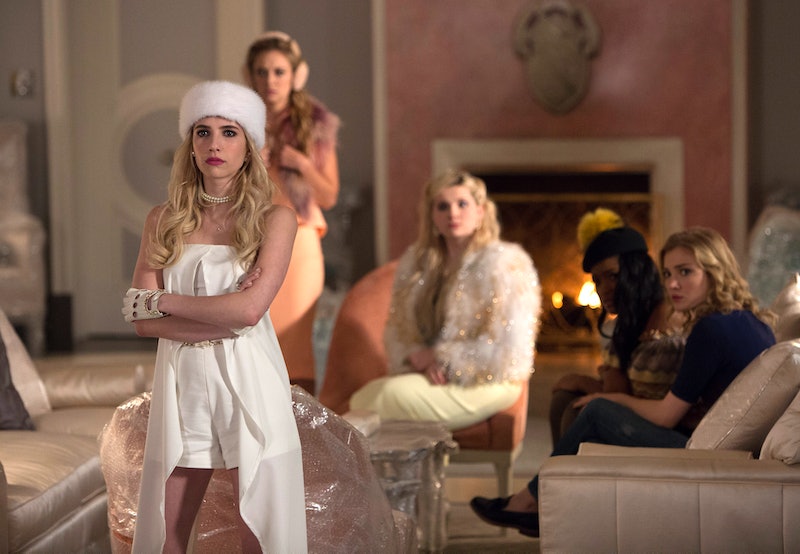 Until they get the axe, basically every character on Scream Queens is a Red Devil suspect. By the time I cross them off my list, it's because they're dead. (I wouldn't be very useful to this investigation — but, then again, neither are any of the detectives who have been sent to Wallace.) I can't wait for the Red Devil(s) to be unmasked, but I'm even more anxious to learn the identity of the bathtub baby on Scream Queens. I mean, at least we know she's female — so the list of possibilities is a little bit shorter. Plus, her identity is key to solving the Red Devil mystery and it'll be interesting to find out whether she knows the truth about her birth or if she's totally in the dark.

Right now, it seems highly likely that Gigi knows who the bathtub baby is — and they may even be working together to avenge Sophia's death. After all, it can't be a coincidence that she's the Hag of Shady Lane and her traumatized psyche is stuck in the 1990s... right?

Here are three theories about the bathtub baby's identity and her possible involvement with the Red Devil:

In the Nov. 4 episode "Beware of Young Girls," Gigi is shown on the phone with one of her accomplices. The Scream Queens Theories Tumblr points out that she refers to someone "she used to know and love," which could definitely be a reference to the baby. It's been hinted that Gigi took care of the baby for some period of time before she was given up for adoption. She also tells Wes that the phone call was related to "family drama" — which could indicate she was speaking to or about the baby that she helped raise.

Reddit user Explostevo thinks that clues about Grace's age indicate she's the bathtub baby. In "Beware of Young Girls," she tells Gigi that her dad hasn't dated in 18 years — but (according to Wes) Grace's mom died when she was two years old. That would mean she's now 20 years old — not 18 like her fellow freshmen. In the premiere Grace and Wes reminisce about how Twilight was the first PG-13 movie she was allowed to see. If she was 13 years old when Twilight released in 2008, that means she was born in 1995. Of course, plenty of kids are taken to PG-13 movies well before their teens so that line alone doesn't prove her age — but her words to Gigi are very suspicious, and they also indicate that she knows something's awry with the timeline her dad gave her.

3. Chanel Is The Bathtub Baby — And She Knows It

Reddit user NaruSasuYaoi theorizes that Chanel is the bathtub baby and she's in #Cahoots with Gigi. In this theory, Gigi is Amy — the Kappa Sister who stayed behind with Sophia and was holding the baby when the other girls returned. We know that Munsch took care of the "details" of the baby (which could mean adoption) and that one of the Kappas was institutionalized. It seems likely that Amy was the one hospitalized — she took care of the baby that night (and possibly for some time afterwards) and was traumatized by watching her friend die and then having the child taken away from her.

Amy/Gigi tracked down Chanel sometime before 2015 and the pair has been plotting revenge ever since. After all, Gigi specifically says that her involvement in the killings is due to the fact that she's "hell-bent on getting revenge." There's been very little onscreen interaction between Gigi and Chanel, so perhaps they're avoiding being seen together to evade suspicion. Plus, Chanel has never been attacked or even targeted by the Red Devil. During hell week, she claims the Red Devil tried to push her out the window — but this happened offscreen and she could have vandalized the bedroom herself.

I can't wait for the Red Devil to be unmasked, but I'm even more anxious to find out the identity of the bathtub baby. Does she know who she is? Is she involved in the murders? Either way, Scream Queens is bound to have one doozy of a finale.