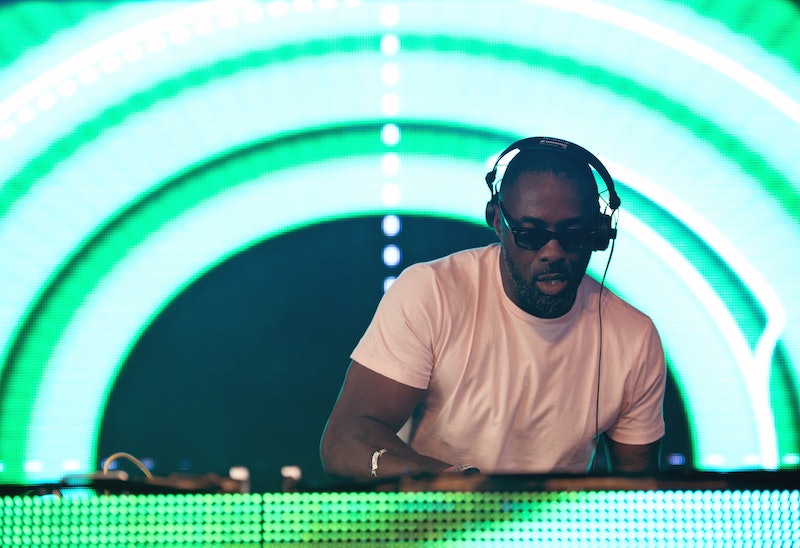 Someone needs to hold me, because I can't handle the radiant joy that I feel as a result of this burst of good news. Apparently, Idris Eba will open for Madonna on her Rebel Heart Tour, which is the greatest thing I've heard since the announcement that Amy Schumer would open for Madonna on the same tour. On Tuesday, the Tour will hit Mercedes-Benz Arena in Berlin, Germany, and Elba is set to be the opening act. But can Idris Elba even sing? If you're like me, and responded to this news with as much confusion as you did excitement, then don't worry. You're probably not the only one who didn't know that Elba is a prolific DJ, rapper, and producer as well as an amazing actor and many people's top choice for the next James Bond.

Yes, that's right. Rather than singing — which, for the curious, Idris Elba can do as well — the actor will be opening Madonna's set with some amazing DJing, the likes of which he has raised the roof with before. (Are the kids still saying "raise the roof"? Someone please help me be hip.) Elba has performed in places like Ibiza and Glastonbury as a DJ, not to mention having an entire SoundCloud of songs for people to enjoy if they want to do more than watch his films and fawn over him. The actor performing in Ibiza is even available online, if you want a preview of what his opening set is likely to sound like.

In addition to his DJing credits, Elba's producing credits include Mumford & Son's "Lover of the Light" music video and Giggs' "Hustle On" music video, both of which he appeared in in cameo roles. He also produced his own album of original material devoted to Nelson Mandela, called mi Mandela, on his own imprint record label, because I guess being talented in four different areas already wasn't good enough for this Brit. Honestly, it's a wonder that more people don't have huge crushes on Elba, when he can basically woo you with his stage presence, his rapping, his singing, his DJing, or his accent. Talk about a quintuple threat.

Madonna certainly seems to be changing the game when it comes to having other celebrities appear on her tour. Much like Taylor Swift, who has become infamous for the number of famous friends she brings onstage with her, Madonna is adding a little more celebrity flavor to her shows. But, unlike Swift, rather than having those celebrities perform with her, Madonna is giving them the time and freedom to wow the audience with sets of their own, giving everyone what they paid for and more from start to finish. I'm not comparing methods to point out that one is necessarily better than the other, but it does put a lot of pressure on other artists and bands going on tour to really step up their performance game going forward.

I mean, if I can pay for a ticket to a Madonna concert and get to see Idris Elba or Amy Schumer for the price of that same ticket, then why would I ever want to see anyone else in concert? Just a thought.