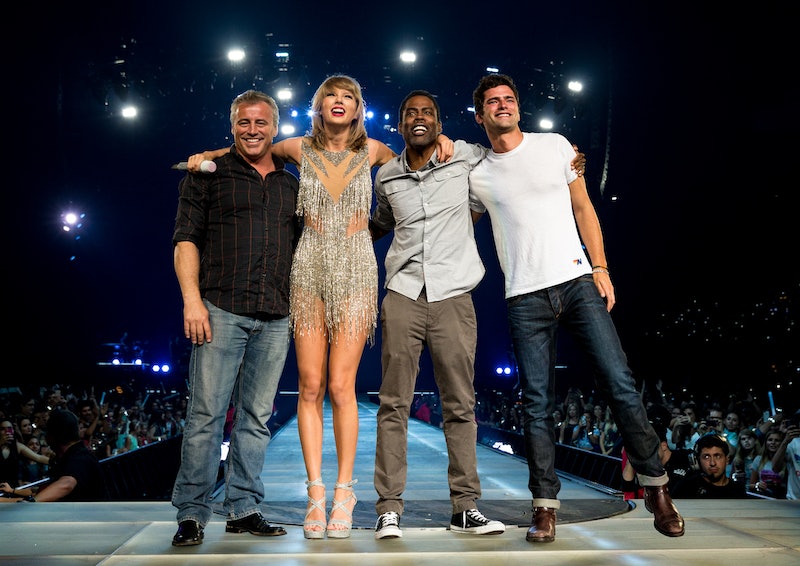 By now, I wouldn't be surprised if Taylor Swift brought President Obama or the entire cast of X-Men onstage at a concert, because as the incredible roster of famous guests at the 1989 World Tour have proven so far, there doesn't seem to be a single celebrity out there who isn't down to catwalk during "Style." From Serena Williams to Julia Roberts to Kobe Bryant, the list has gotten crazier and crazier each concert, but I think Saturday night's show at the Staples Center has officially claimed the title of "most random T-Swift concert guests ever." Throughout the night, Swift brought out Matt LeBlanc, Chris Rock, male model Sean O'Pry, Mary J. Blige, and Uzo Aduba to strut the stage and sing along, and while the crowd clearly loved the surprises, there's no question about it, that lineup is weird.

Some of the choices are a bit more understandable than others; Aduba, aka Crazy Eyes on Orange is the New Black, has been a 1989 guest before; Blige is new, but fits the bill of "talented, iconic female singer who's recently become friends with Swift"; O'Pry is the number one male model in the world, so it's no shock he runs in the same circle as Swift and her circle of supermodel pals. Chris Rock, though? Cool, but very random. And Matt LeBlanc?! Even as a self-labeled T. Swift Tour Guest Whisperer, I can safely say I did not see that one coming.

Although thinking about it, I probably should've. After all, Swift has admitted many times that she's a major fan of Friends , the show LeBlanc will forever be best known for. She's seen every episode and watches reruns before she goes to bed, and BFF Ed Sheeran is close friends with Courteney Cox and Jennifer Aniston (he attended Jen's wedding, and once passed out at her pool during a pre-Thanksgiving party, as happen when you're Ed Sheeran). So it's not totally confusing why LeBlanc would appear onstage with Swift, although believe me, I'm still not over it.

I like to imagine that this collaboration happened something like this: one night recently, Swift was laying in bed with cats Meredith and Olivia, watching a Friends episode on TV (probably an early-season Rachel and Ross one — you know she loves those). She started thinking about how cool it'd be to have the cast come on tour with her, because, seeing as she's Taylor Swift and could literally get the entire roster of 2016 presidential nominees onstage with her if she wanted, that's a very reasonable thought. But she knew she couldn't get all of them — Jen Aniston was enjoying her honeymoon, Cox and Kudrow were both busy with work, Perry wasn't a fan of huge crowds, and Schwimmer, well, she just didn't call him (sorry, Ross). That left LeBlanc, and an idea was born.

But she couldn't just have him come out onstage by himself! Joey may be a crowd-pleaser, but he's still pretty shy when it comes to being the center of attention. So she enlisted Chris Rock to accompany him, knowing that the two actors would bond over their comedic backgrounds and tendencies to create TV shows featuring fictional versions of themselves. As Staples Center attendees saw, it was a perfect match.

As for future shows, though, I wouldn't be surprised if the entire cast of Friends does come onstage together, now that LeBlanc's taken the leap. They've all collaborated before, and many of them are close in real life, as well — perhaps a Swift-organized reunion would even mend any awkwardness shared between Aniston and the male cast members that came from her not inviting them to her wedding. If anyone can heal celebrity wounds, it's Taylor Swift, as we know.

If all goes well, maybe Swift can even use her powers to have Aniston and Schwimmer state publicly, once and for all, if they were really on a break — or maybe, even better, she can finally jump-start that movie or TV anniversary reunion fans have been dying to see forever. It's unlikely, but this is Taylor Swift I'm talking about — if anyone can work miracles, it's the girl who befriended Kanye West and got Paul McCartney to sing "Shake It Off." Anything can happen.