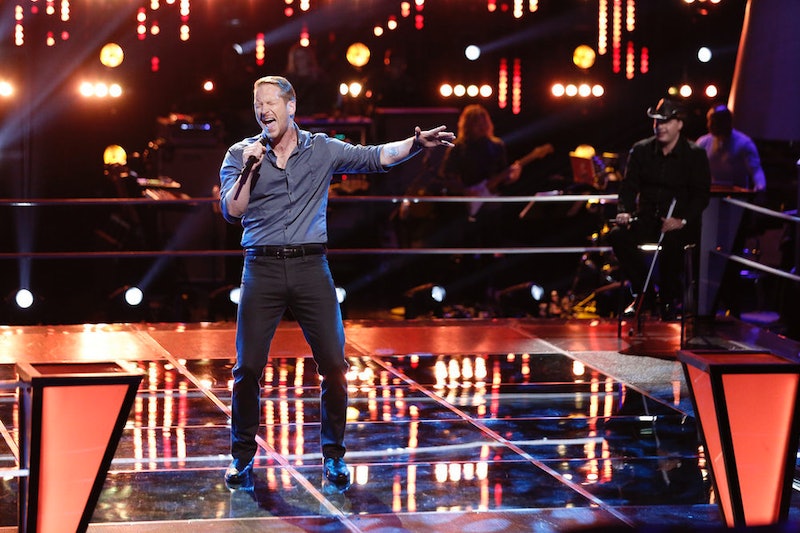 Barrett Baber has overcome a lot of odds to reach The Voice Season 9 Live Playoffs — and here's hoping he'll stay in the competition. The Arkansas teacher-turned-singer still has a lot of his soulful country talent to show the audience. And, there are a bunch of songs Barrett Baber should cover on The Voice, because his pipes need to be put to good use on the vocal competition show. Baber has already wowed audiences and coaches with his Blind Audition performance of Jeff Healy Band's "Angel Eyes" and his cover of "Colder Weather" by the Zac Brown Band in the Knockout Rounds.

As Baber takes the stage on Tuesday night for his first live performance, he's excited to take the competition to a whole new level. "I have a lot of tools in my tool belt that I haven't even started to use," he told Bustle in a recent interview. "I'm excited to do that in the live shows." Baber is a member of coach Blake Shelton's team, but the singer doesn't limit himself to singing country — his style is a kind of soulful country. Most importantly, he seems to put his all into each song he sings — he even took the stage with a painful injury during his Knockout Round. Now that's dedication.

Here are some songs I hope Baber covers and conquers on The Voice.

1. "Have A Little Faith In Me" By John Hiatt

I could see Baber totally slaying this 1987 rock song on stage. The tune has its big moments, plus has a lot of emotion.

During the Blind Auditions, Shelton said Baber reminded him of Brooks, so why not cover a song by the legendary country singer? This 1989 single is considered to be Brooks' signature song, and I know Baber could kill it.

How about a nice soulful rock track from the 1970s? It was Gray's biggest hit and it could be a one for Baber, too.

I know Baber's got the pipes and spirit to tackle the large chorus on this 1989 hit tune.

It might be a little intimidating to take on a song by, you know, The Boss, but I think Baber could do it.

I think Baber could totally kill this Grammy-winning 1993 song by the English singer. It's another one with a big chorus and a lot of heart. Hopefully he'll keep progressing this season and be able to tackle some of these and more!