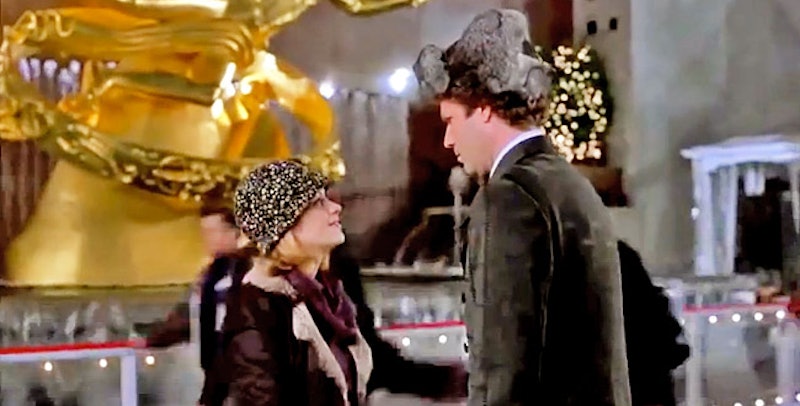 It's almost that time of the year when excessive spending, spontaneous caroling, and public eggnog drinking are socially acceptable. And do you know what else is acceptable around this time? Wanting to watch romantic Christmas movies. You know, the kind of movies that feature adorable couples in matching sweaters doing things like holding hands while ice skating, snuggling under blankets in a horse-drawn carriage, and eskimo-kissing while standing beneath mistletoe (seriously).

Although such behaviors might be nauseating at other points on the calendar, during the holiday season it's common to experience an odd craving for such cinematic romance. It's simply a Christmas phenomenon, kind of like how you willingly drag a tree onto your new white carpet in December even though you would never allow such a thing in July. The sooner you accept this fact and stop trying to fight the holiday spirit, the sooner you can get busy watching the best romantic Christmas movies of the season. To prevent burnout, try to watch a mix of different movies: some that are lighthearted and funny, some that are thought-provoking and meaningful, and some that are so sweet you'll feel like you overdosed on sugarplums. Here are some good ones to help you get your prescribed dose of Christmas cheer— without the eggnog hangover.

The ultimate Christmas romance, with a huge cast of characters (played by some equally huge stars) whose paths intertwine around the holidays.

Bing Crosby's crooning will give you all the feels. Seriously, this classic gets me every. Damn. Time.

Just do your best to enjoy this cute story despite the absurdity of the fact that Cameron Diaz gets matched with Jude Law while Kate Winslet is paired with Jack Black.

4. It's A Wonderful Life

"....You want the moon? Just say the word and I'll throw a lasso around it and pull it down."

Said no man to me ever. *sips eggnog*

Stream It's A Wonderful Life here.

Tom Hanks and Meg Ryan co-starred in this holiday romance in 1993, five years before they immortalized '90s technology with You've Got Mail.

Ryan Reynolds comes home for Christmas to make you think long and hard about every guy you've ever friend-zoned.

7. The Most Wonderful Time Of The Year

My mother and I accidentally watched this Hallmark movie on TV two years ago and haven't stopped quoting it since. Mainly because they say the male love interest's name approximately 3489374 times. Morgannnnn!

Stream The Most Wonderful Time Of The Year here.

Holiday magic is in the air as Meg Ryan and Billy Crystal prove that men and woman can't "just be friends."

The best way to spread Christmas cheer is by singing loud for all to hear. And the best way to nab your crush is by asking him/her to go eat food with you.

People love to hate this movie; it's kind of like the fruitcake of the holiday film dessert buffet. But this fruitcake includes Sarah Jessica Parker and Dermot Mulroney, so you'll probably still indulge as a guilty pleasure.

Yet another New York holiday romance story to make you wish that life was a John Cusack movie.

A story about a type-A New Yorker who loses everything, only to find love selling Christmas trees on the street in Manhattan. Literally everything about this is implausible, but hey, it's Christmas.

Settle down with these cute flicks and let the Christmas romance rain over you as plentifully as your Christmas tree is going to rain pine needles on your rug. 'Tis the season, right?