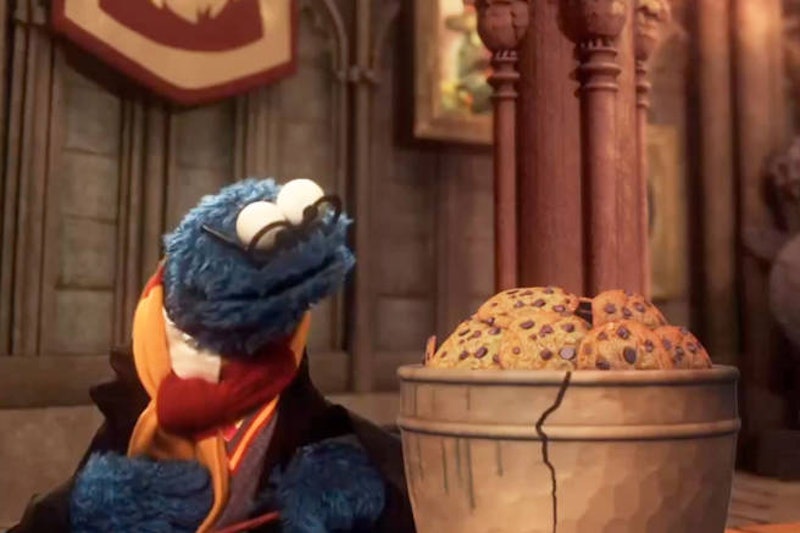 Despite being 46 years old, Sesame Street has managed to keep itself up in the cultural conversation thanks to incredible guest stars and hilarious pop culture parody moments that appeal to adults just as much as its audience of children. Some of the best bits are Sesame Street 's literary moments that hit all the right notes for book lovers of all ages.

Whether the PBS show is poking fun at Harry Potter, William Shakespeare, or Cyrano de Bergerac (seriously), its Muppet gang is clever and hilarious — while still paying homage to the book it is satirizing. Word play runs amuck, as your favorite characters get silly re-names for the sketch that will have you doubled over in laughter.

November 10 marks the 46th anniversary of the children's TV series's first airing on PBS. Beginning this year, Sesame Street moved to HBO for its next five seasons, so clearly the Muppets are showing no sign of slowing down. In honor of its birthday Tuesday, here are some of Sesame Streets best literary moments to show that a love of literature is still alive and well in the minds of our next generation. (Oh, and also because they're straight up hysterical for us adult viewers, too.)

Just who is Claudius again? These muppets just can't seem to agree.

Sesame Street plays right into the hands of anti-Bella Swan readers, and kills it in the parody name game: Bakob, Shortbreadward the yumpire, and Belly.

You know, "the classic tale of a rooster, a farmer..." Grover plays the farmer who is trying to get his rooster to "cock-a-doodle-do" despite the fact that he's sick. But without the rooster, the sun cannot rise in the morning and let all the animals know it's time to wake up. Just as Ernest Hemingway intended.

4. Little House on the Prairie

"Oh dear, this is really silly," says a little girl named Prairie, who is walking around with a miniature house on her head. Try not to crack up, grammar nerds.

5. The Taming of the Shoe

The totally feminist shoe will not be tied down to Grovero's foot. You'll be able to watch this epic literary parody if you can even get past Cookie Monster's announcement of "William Shoespeare, famous podiatrist."

Well I died when Melisandre puppet popped up. I also would love to see Dany, Cersei, Robb, and Joffrey play a game of musical chairs for all of Westeros, George R.R. Martin.

This old man loves the C so much he never gets C-sick. Watch out for the surprise ending.

"The story of Jean Bon-Bon, a French guy who was very sad because he had no cookies." We then meet Flantine, Creamette, and the rest of the gang who try to convince Jean Bon-Bon to share his cookies so that everyone in France can have some, too — through song, of course.

"The story of No. 1 and its historic flight." Need I say more?

Professor Crumblemore (yes!) has to teach Furry Potter to pay attention to directions so he can eat a goblet full of cookies. Let's just say it's a bit less bleak than the original book.

Cyranose de Bergerac is one of the best rhymers in the land, but he's a little sensitive about his over-sized facial feature. Only Sesame Street would dream of showing children an LOL parody of an 1897 play based off the life of a 1600s-based French novelist and totally get away with it.