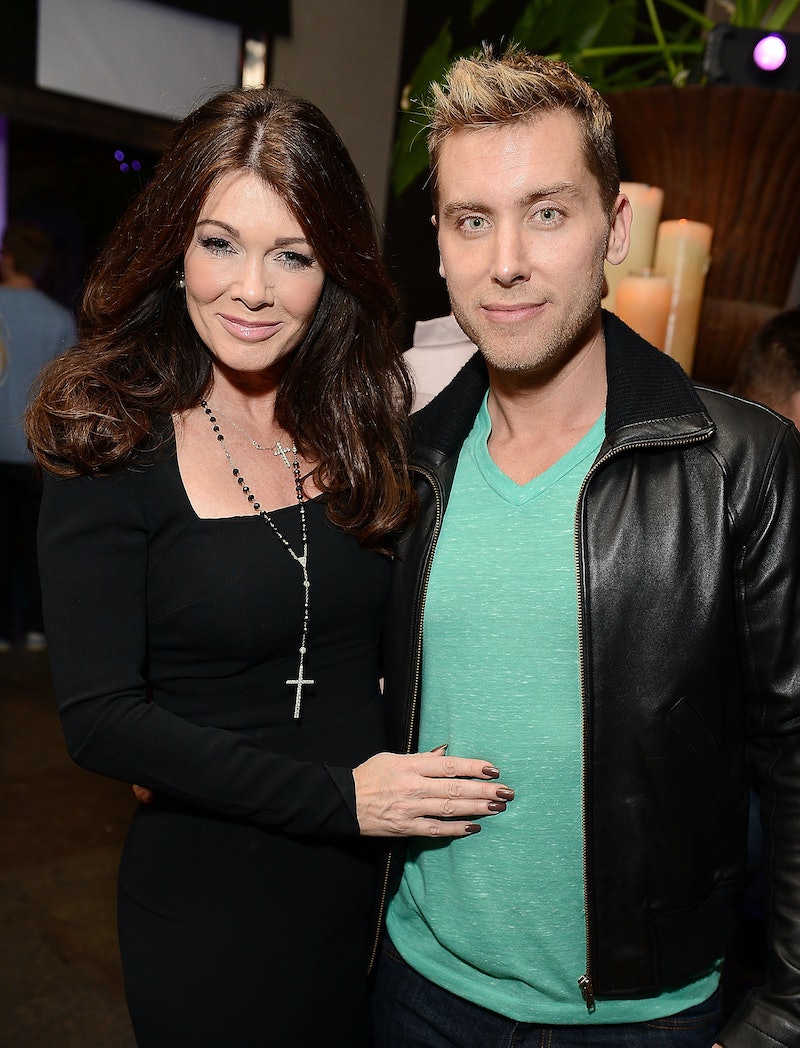 This sounds like a dream come true to me, and I don't know who I envy more: the celebs who get to hang with the Housewives or the cast members for being friends with A-list stars. Nevertheless, it's safe to say that I'm pretty fascinated by the co-mingling of Housewives and actual celebrities. I wonder if these people became friends organically at the grocery store or some fancy event, or if they formed bonds from mutual fandom. Now, I'm just hoping for these celebrities to join Real Housewives or at least make a guest appearance.

If you follow Chrissy Teigen on Twitter, you know that she's a Real Housewives super fan, so it's not at all shocking that she's struck up a friendship with NeNe Leakes.

Am I the only one a little thrown off by this? How does Adrienne Maloof know Christina Aguilera? Apparently they're close enough to go trick-or-treating together

This friendship does not really surprise me. Kris Jenner and occasional Real Housewives of Beverly Hills guest star/ Kyle Richards' BFF Faye Resnick go way back, so it makes sense for Jenner and Richards to be friends now.

Lisa Vanderpump and some other other Beverly Hills Housewives stared in Lady Gaga's "G.U.Y." music video and it looks like Gaga and Vanderpump have kept in touch

It makes perfect sense for Leakes and Rancic to be friends now that Leakes is making some regular appearance on Fashion Police . They're both very "tell it like it is" women, so I'm sure that they have a lot to talk about in between takes.

This one doesn't shock me at all, especially since there were rumors of Snooki joining the Real Housewives of New Jersey cast Plus, Snooki and Melissa Gorga are both moms who live in North Jersey so I am sure they have a lot in common

Leakes and Hough were partners during Switch Up Week on Dancing with the Stars. While it's obvious how they know each other, it's still really nice to see that they are in touch and still get along so well.

This seems pretty random, but if you know your Bethenny Frankel fun facts from before she was a Housewife, you would be aware that she worked on the Saved by the Bell set. So this means that she and Mario Lopez go way back.

Vanderpump and Bass met while they were on Dancing With the Stars and have been pretty close ever since. She was even a bridesmaid in his wedding!

It really seems like Leakes is cleaning house these days when it comes to her friends. She is done with Real Housewives and is now hanging out with top celebrities. Leakes and Campbell are fierce duo that I would never ever mess with. They are definitely quite the pair.

They're both Heathers who live in California, so it makes perfectly adorable sense for the comedian and the reality star to end up being friends. Plus, McDonald has a lot of Real Housewives connections...

McDonald isn't just friends with the RHOC ladies. She celebrated Halloween with Kyle Richards and her husband this year. And if you follow either of these two on Instagram, you know that this is far from their first hang out. Plus, they are both buddies with Kris Jenner, so it makes sense for them to hang from time to time.

See, McDonald loves the Real Housewives and she seems to be pretty close with Shannon Beador. There were even rumors of Heather joining the cast in 2013. And at this point I feel like she's an honorary Real Housewife.

If you follow either of these two on Instagram, you know that they hang out all the time. You can even catch McDonald in the background of RHOC from time to time. I still don't get why she isn't a Housewife yet. She would add some much needed comic relief.

Fantasia was a bridesmaid in Burruss' wedding and there were rumors that they ended their friendship after Fantasia gave a wedding toast full of curse words. But they're still cool and Burruss has Fantasia's back.

If I can't be a part of these friendships, I'm happy that I can be a fly on the wall via social media and imagine what they talk and text about. Like I said, in my eyes the Real Housewives are celebrities so I am not at all shocked by any of these bonds.