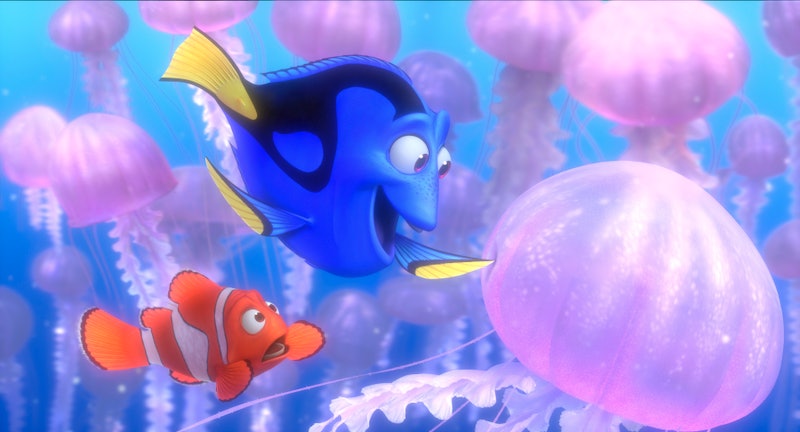 I've always been a little iffy about sequels to beloved movies, but for some reason, Disney can usually make it work. So when I heard about Finding Dory , the sequel to Finding Nemo, I was pretty excited — and not just because of my undying love of anything and everything Ellen DeGeneres does. And even though the movie doesn't hit theaters until June 17, 2016, more and more details about what to expect are slowly becoming available. The most recent update? The first Finding Dory trailer, which premiered on The Ellen Show this week. Less than two minutes isn't nearly enough footage to satisfy my curiosity, but it does prove one thing. Dory, Marlin, and Nemo are all still together, but it doesn't let us know when Finding Dory takes place. Is it in the present day, or is it right where Finding Nemo left off?

Fortunately, this question has already been answered. Back in May, Pixar's Chief Creative Officer John Lasseter revealed that Finding Dory takes place six months after Finding Nemo ends, which opens up a lot of possibility for the movie. From the new preview alone, we see that Dory's struggling with sleep swimming — aka the fish equivalent to sleepwalking, duh — and it seems like it's going to be the jumping off point for the plot of the rest of the movie.

But even though the time jump isn't too significant, I'm still hoping that Finding Dory will explain what happened in those six months that they fast forwarded through. After all, they have to bridge the gap somehow, unless they're planning on diving headfirst into the next adventure (pun intended). What happened to Darla, that girl at the dentist's office? Did she get her braces off? Did Marlin go back to his helicopter parent ways? Can Dory remember anything yet? Where did Dory even come from? Are Dory and Marlin dating? Is it weird that I'm thinking about the romantic lives of fish?

I can't wait to see how (and if) the movie tackles theses questions, and what happens to the characters next. Disney and Pixar, I'm trusting you guys to make this sequel live up the original. Let's not make this a Cinderella III, please! I can't live through that kind of disappointment again.