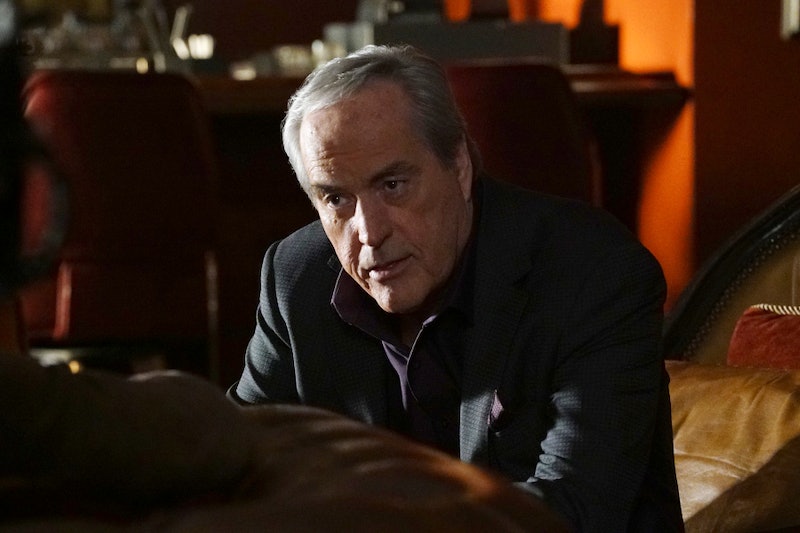 Season 3 of Agents of S.H.I.E.L.D. has commenced quite the rollout of new villains. Between Ward's mission to reinstate Hydra, the morally gray Rosalind Price and her ATCU, and the Inhuman vigilante Lash, Coulson's team is really surrounded by a veritable sea of foes. Newly added to the ever-growing list? One Gideon Malick, who Agents of S.H.I.E.L.D. introduced in "Among Us Hide..." We don't know much about him yet, but he is a familiar face within the Marvel Cinematic Universe — he was one of the members of the World Security Council in The Avengers.

There's also the fact that the man seemed to cast a long shadow within Hydra's shattered ranks. He was clearly someone high up in the organization; according to the ever-squirrelly Werner von Strucker, Malick was buddy-buddy with his father, Wolfgang von Strucker (you might remember him from a little movie called The Avengers: Age of Ultron). There's also the fact that he seems to be in a bit of a villain-off with former S.H.I.E.L.D. agent, Grant Ward. Near the end of last week's episode, he offered Ward an out... which Ward promptly rejected (cue Taylor Swift's "Bad Blood").

Ward's trying to build a new Hydra, and he clearly views Malick as part of the old guard — but how will Malick react to being thrown over so unceremoniously? Will he seek revenge? Ally himself with Ward's enemies? Or keep trying to befriend Ward? Brett Dalton, who plays Ward, told IGN, "I don't know if they're going to work together; if they do, that's going to have to be something they work out." He elaborated that Ward and Malick do have some things in common — namely, they have a shared adversary. As he put it, "Both of us see S.H.I.E.L.D. — and maybe even more specifically, Coulson — as a speed bump along the way."

Of course, just because both of them share a distaste for Coulson, we can't expect it to be all wine and roses, since the Hydra major players "have two different visions of where this organization could go." It sounds like Malick and Ward will either end up striking some kind of deal in the name of the greater good (or, in their case, the greater evil), or they'll be engaging in some kind of spy-vs-spy awesomeness.

Throughout the IGN interview, Dalton was very careful not to show his cards either way, but he did reveal that he was in the process of shooting some very cool episodes leading up to the midseason finale, so however the whole Malick storyline ends up playing out, at least we can bank on it being exciting. The actor even alluded to an upcoming shakeup on the show that's going to "drop a bomb on people, the same way we did with Winter Soldier in Season 1."

Take all that together with the fact that S.H.I.E.L.D.'s executive producer Jeph Loeb told Entertainment Weekly of actor Powers Boothe, "Only someone of Powers’ caliber could deliver the type of ominous and powerful performance we needed," and you've got yourself some pretty exciting drama coming down the Agents of S.H.I.E.L.D. pipeline.