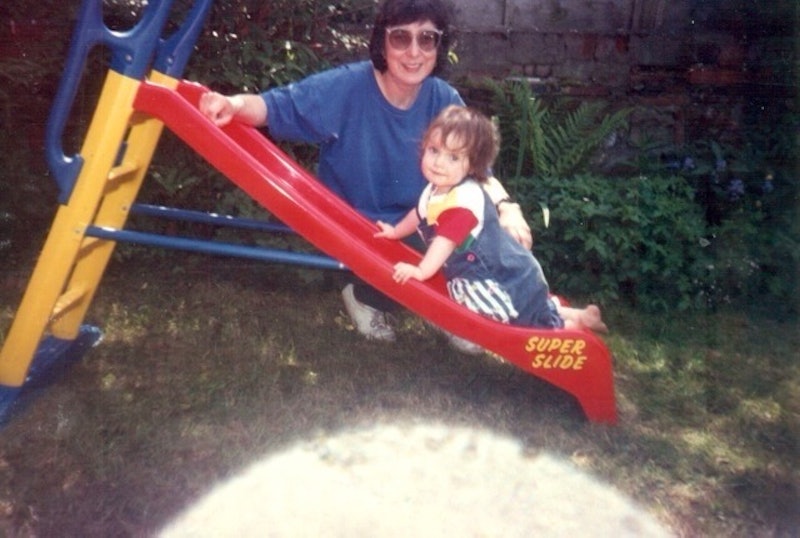 Ask almost anyone, and I bet they've got at least one or two potential baby names stashed away for future use. Based on my own experiences with a fairly unique name (Madeleine), I want my kids to have unconventional monikers — and combined with having grown up in the '90s? Well, it only seems fitting to compile a list of unique baby names from the '90s. Personally, I've got, like, three standbys and a rotating list of names that I think would suit my future spawn, so of course a lot of my inspiration comes from the decade in which I spent my childhood.

I always think it's so cute when people name their kids after cultural touchstones that influenced them. "Harper" for Harper Lee (a personal fave), "Otis" for Otis Redding — it feels like, I don't know, you're imbuing your children with little guardian spirits or something. Another weird obsession of mine is delving deep into the origins and meanings of names — even though no one really knows that, for example, "Meredith" means "guardian of the sea," I still think about it every time I binge-watch Grey's Anatomy, you know?

So, whether you're all about the culturally-relevant names, or you're more interested in the meanings, hopefully this list sparks some inspiration (and memories — RIP the '90s). Let's get to naming some hypothetical babies!

The Hunchback of Notre Dame is maybe my favorite Disney movie, largely because the bad guy, Frolo, is classified as bad because he demonizes women for being attractive. But also? Esmeralda is badass. A Portuguese/Spanish name meaning "emerald." Esmeralda is beautiful on its own and can be translated into a number of adorable nicknames — Essie, Esme, Mel, and so on. Also, Ryan Gosling and Eva Mendes named their daughter Esmeralda, and I feel like they probably know what's what, you know?

Joaquin Phoenix was one-half of a child acting duo that broke everybody's hearts in the 1980s and '90s with their beautiful eyes and beautiful faces and all their beautiful emotions. Parenthood? To Die For? Like, ugh, my heart. Joaquin is the Spanish language variation on Joachim, which means "lifted by Yahweh." Makes sense, since Joaquin Phoenix was born in Puerto Rico to parents who were members of the Children of God. Still a very cool-sounding name, though.

Everybody's fave snark-master, Daria Morgendorffer brought deadpan teenage ennui to the forefront of '90s culture. She exuded cool, and who doesn't want that for their child? Plus, the name Daria has some pretty awesome origins. The female version of the Ancient Persian name Darius, Daria is a saint in Roman Catholic and Eastern Orthodox churches.

The other famous Phoenix brother, River was a teenage dreamboat, starring in the seminal coming-of-age film Stand By Me and my personal favorite, Running On Empty (again with the tears!). His life was cut tragically short by a drug overdose in 1993, but River remains an iconic figure of the '90s. Plus, it's a beautiful, gender neutral name. I won't go into the meaning because it's, uh, pretty straightforward.

OK, OK, I know Topanga is a weird sounding name, but the Boy Meets World character was so delightfully feminist and tough. I loved her. You probably loved her. I want my daughter to be like her. And Topanga means, "where the land meets the sea," and that is a truly lovely image.

No, I am not suggesting you name your child after Andre the Giant, unless you want to, in which case, yay you, that's original. Andre Agassi, on the other hand, was a tennis star and handsome dude in the '90s. I don't know much about tennis, but apparently he was really, really good. Plus, Andre, which has French origins, means, "brave." Very cool and nice-sounding.

If you're looking for '90s-inspired baby names, why not go with the Queen Diva herself, Mariah Carey? Her voice is out of this world. Mariah is derived from "Mary," which, for such a popular name, has very ambiguous origins. It's thought that the name means either, "wished for child" or "rebellious."

Before he was throwing rings into pits of fire, Elijah Wood was starring in the 1993 big screen adaptation of The Adventures of Huckleberry Finn. Now, you could name your kid Huckleberry, I guess, but personally I love Finn — so much so that it's on my permanent future baby name list — especially since it's Irish and means "fair." And if all of you also name your kid Finn, I will be really mad, because I'm of those obnoxious people who wants their kids to have totally unique names.

Ramona Quimby, star of the Beverly Cleary book series, was a hero of mine growing up — always curious, and always getting into trouble. This name is also on my permanent future baby name list — and I am telling you all this in confidence. Do not screw it up. Ramona, from Spanish and German origins, means, "protecting hands," which is a beautiful sentiment. Once again I warn you, Ramona is mine.

I mean... come on. Dawson! From Dawson's Creek! The angst! The tears! The hopes and dreams of someday kissing Katie Holmes! Nothing has ever been more 90s-esque than this name. Plus, it's gender neutral. Plus, if the baby daddy is named "David," then you're in luck; it means, "son of David."