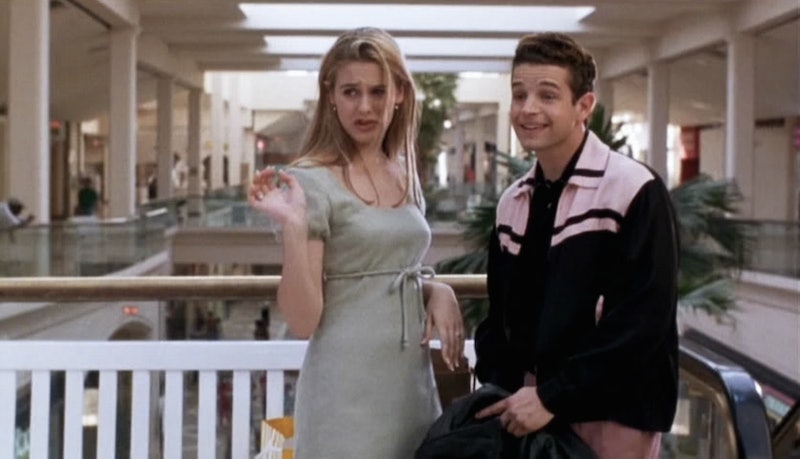 Between 1996 and 1999, you could frequently find me lurking inside the now-defunct Westgate Mall in a suburb of Cleveland, Ohio. I perused the popular stores most of us shopped at in the '90s, armed with about $25 of allowance money and a ticket to the latest PG-13 film. My friends and I would cruise the mall looking for great deals on clear vinyl backpacks and wide-leg jeans, then head to the theater and make entirely too much noise. Then, at 7:30 p.m. (and not a second later, dammit), my dad picked me up and took me home ... Such was the life of a '90s kid.

One advantage of being an early Millennial (born in the mid-to-late '80s) is that we got to grow up surrounded by '90s mall culture, steeped in time-honored traditions like "listening to Jewel on the massive headphones at Sam Goody" and "getting kicked out of Hot Topic for slurping an Orange Julius in the store." Young people today will never know the joy of an afternoon spent depriving oneself of Vitamin D and trying to convince the girl at Claire's to pierce your underage cartilage.

While those days and most of these stores are long gone, we can still revel in our nostalgia for what once was. Feel free to break out your JNCOs and stroke them tenderly while you read about 11 stores we all shopped at in the '90s.

Freaking out over the dELia*s catalog was like a rite of passage, most of us delighting in its random use of capitalization and punctuation. You probably begged your mom to place your orders ASAP before the bell bottoms and halters ran out.

If you were a dude who loved Korn or a girl who rocked JNCO jeans, people could probably find you inside of a Gadzooks. It was a beacon of '90s mall fashion ... until the chain was acquired in 2005 and all remaining stores were closed.

Back when music was more than just a file to be downloaded, cool kids spent hours browsing Sam Goody in the mall. I bought No Doubt's Tragic Kingdom at a Sam Goody, and the smell inside the store (a combination of plastic CD covers and nerd sweat) is emblazoned in my memory forever.

I'm not even joking: I saw my first penis at Spencer's. I was 11 years old, it was printed on a deck of playing cards, and my world was never to be the same. Spencer's carried a wide variety of gag gifts as well, and had the lava lamp market on lock.

When it was time for your experimental mall goth phase, Hot Topic was your shining beacon of hope. Granted, no real goths or punks would ever shop there, but for people who preferred baby steps into counterculture (coughposerscough), Hot Topic had all the flame shirts and skull creepers you could handle.

You got your first ear piercing there, and then you proceeded to spend $5 of your hard-earned chore money on a tiny backpack and a fuzzy pen. Claire's was everything to '90s chicks who loved glitz, and thankfully it still exists today.

This one was not unlike Merry Go Round (I'll get there soon), but with a little bit of polished flair. This is where '90s kids shopped when it was time to impress everyone at school. That '90s storefront is really taking me back.

This store was specifically for small sizes (does anyone else remember that it sold a size -2?), so as a chubby kid, I simply didn't have much use for it. However, I'm told that it was a major '90s mall staple, and there are even rumors that one or two of the stores still exist in random malls across America.

Cool tweens with an affinity for clear backpacks and inflatable furniture could have a field day at the Limited Too, especially if mom was there to foot the bill. Many of the remaining stores were converted into Justices in 2005, but the brand recently announced that it will be back in 2016. Guess it's time to prepare my jelly shoe budget.

This was your go-to '90s stop for matching vest and pants, as well as brands like B.U.M. Equipment and Skidz. Truth be told, I am fully ready to revive the matching oversized pants and jacket look.

The scents of Cucumber Melon and Plumeria are forever burned into my nostrils, causing me to have intense olfactory memories at the mere sight of them. Everyone, and I mean everyone, had a bottle or two of fragrant spray from B&BW, and shopping for them would leave you with a headache for days.

More like this
Here Are All 703 Outfits Rachel Wore On Friends
By Kat George
The 12 Best November 2022 Beauty Launches, According To Our Editors
By Rachel Lapidos
20 Beauty Gifts Under $25 That Make Perfect Stocking Stuffers
By Jordan Murray and Audrey Noble
This Scandi Beauty Brand Is Basically Hygge In A Bottle
By Justine Knight
Get Even More From Bustle — Sign Up For The Newsletter