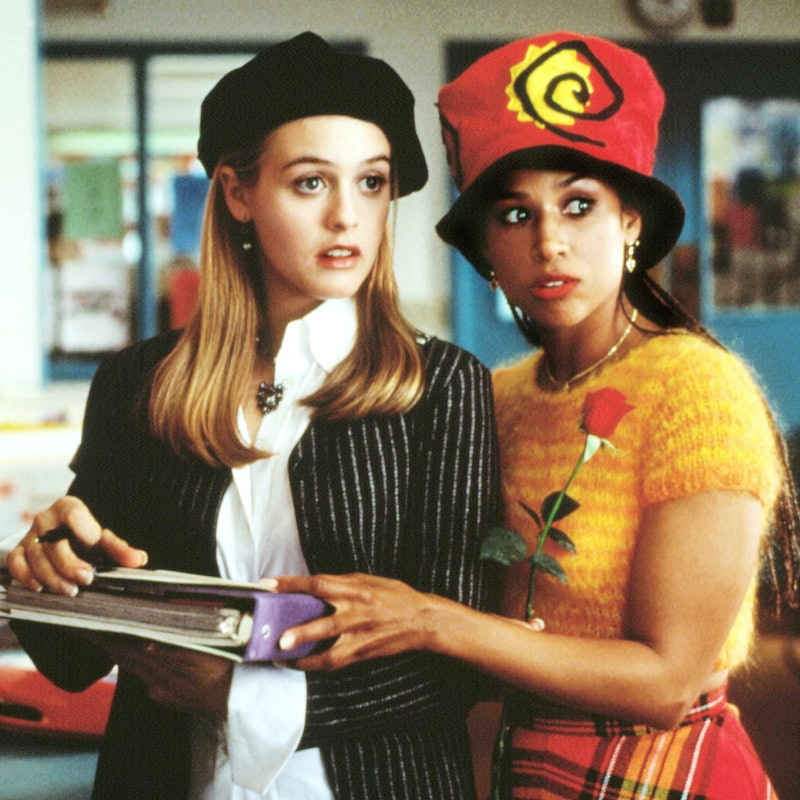 I feel like my perception of the passage of time is distorted. When I read a book or watch a movie created in 1995, my first thought tends to be “Oh, so it’s pretty recent.” And then it takes a few minutes for me to register that, no, actually that means it’s 20 years old. TWENTY YEARS. And then I feel so, so ancient. Like, I might as well just start wearing housecoats and buy an easy chair and never get out of it, because it’s all going to be over soon.

But although I often perceive the '90s as not so long ago, in other ways, it feels incredibly distant — especially when I think about the changes in technology between then and now. In the space of only a couple of decades, there has been such a sea change in the way we communicate and consume media that it’s hard to imagine what life was like before. (Seriously, how the hell did we communicate without cell phones or email? How did I fulfill my desire for useless trivia without Wikipedia?)

It absolutely blows my mind that kids born since the late '90s have grown up with no memory of life without mobile phones or the Internet. They will never know the struggles of learning how to use a card catalog, of having to make detailed plans of where and when to meet someone, of constantly being lost, of making their very first foray into the uncharted territory of the Internet Super Highway. There is a lot of stuff that shaped everyday life in the '90s that wouldn’t fly today. Read on and thank your Millennial stars that you don’t have to deal with these daily trials anymore.

1. You arranged to meet your best friend at the mall, and then wandered around trying unsuccessfully to find her. This could go on for HOURS, because cell phones were not yet a thing.

Guys, it was the Dark Ages.

2. You got fined because you were unkind and didn’t rewind. (Pure poetry, I know. YOU’RE WELCOME).

Do you remember that there were whole machines dedicated solely to rewinding videos? One of my friends had one shaped like a car, and the headlights lit up when she used it. It seemed cool at the time, but now all I can think is “Wha?” What designer sat down at a meeting and said, “I’ve got my finger on the pulse of pop culture, and I’ve got six words for you: Videotape rewinders that look like cars. GENIUS.”

Look, someone even went to the trouble of putting one on YouTube, because of course:

Why did anyone EVER that that was a good idea? It’s so … squeaky.

4. When you favorite song was on the radio, you taped it.

But you always missed the beginning of the song. Because there’s nothing like having a shelf full of half-recorded '90s anthems, right?

5. You were regularly forced to choose between having the Internet or a functioning telephone.

Actually, that choice was usually made for you, when one of your parents demanded that you stop hogging the only phone line in the house.

6. You and your friends got into debates about random trivia, and had no way to find out the answer.

In the '90s, the days of the Wikipedia rabbit hole had not yet been born. Sure, there were encyclopedias, but they were limited to mostly serious subjects. If you wanted to know something incredibly specific about who did the voices in Beauty and the Beast, you were SOL.

7. Your CD case was stolen, which meant that you lost ALL of your music.

There was no cloud back in the day, and so your entire music collection lived in a heavy case full of plastic sleeves. When it got stolen, you were HEARTBROKEN. How were you going to listen to Oasis now???

8. You thought long and hard about your AOL screen name, only to discover that some jerkface had already taken it.

In the '90s, one’s AOL screen name selection represented a powerful moment of creative self-identification. I literally spent days and days struggling to come up with something that would perfectly encapsulate my glittering personality, my teen angst, and my obsession with Star Wars in only a few characters. AND IT TURNED OUT TO BE TAKEN. Talk about angst!

9. You realized that the fellow teenager you’ve been talking to in the Seventeen chat room was actually a middle-aged man who wants to “cyber.”

You weren’t totally sure what that meant, but you were positive you did not want to do it.

10. Countless TV plots could immediately have been solved by someone simply having a cell phone.

Seriously, I am rewatching ­­Buffy The Vampire Slayer right now (as you do), and I can’t tell you how many plot lines would be wrapped up if Giles could just call Buffy and say something like “Actually, that amulet is full of Satan. Don’t do that thing you are about to do.” Roll credits. (That said, BTVS, ILU 4EVER).

11.You actually believed that videotapes and Nintendo cartridges could be fixed by blowing on them.

12. The Discman in your mom’s car had to be hooked up to a lighter, and it would skip every time she drove over even the smallest bump in the road.

Remember when cars had lighters in them? Who thought that was a good idea?

13. If you wanted to learn to do a thing, you had to actually find someone who could do that thing.

In the '90s, the Internet was in its infancy, and its endless How-To blog posts and videos that tell you how to do practically anything a human could conceivably want to do had not yet arrived. If you wanted to learn to do something — from French braiding hair to tiling a bathroom — you had to either find an instruction manual or an actual human person who could explain it to you.

14. If you wanted to watch a new release, you either had to buy the tape or wait — yes, WAIT — until it was available at the video store.

How did we survive before the days of instant streaming? The number of times I went to the video store with the intention of watching Reality Bites, only to discover that some vile intruder had already checked it out, is too heartbreaking to contemplate.

15. Family road trips were dominated by your parents arguing over how to interpret the map.

And then you’d have to figure out how to fold the map back into its original arrangement, but it would inevitably end up as a giant, tangled wad of paper.

16. You would try to take selfies, only to discover when you had them developed that you accidentally photographed your finger in Every. Single. Shot.

And your had to PAY to develop that sh*t.

17. You were expected to actually memorize phone numbers.

These days, I’m impressed with myself if I can remember my own number.

18. If you missed your favorite show, you ran the risk of never finding out what happened.

Or at least, having to wait until it showed in reruns, MONTHS later. MONTHS. Guys, I don’t know how we handled it.

More like this
American Girl Doll Memes Are Going Viral On Instagram & Tiktok
By Emma Carey
Taco Bell Announced A Crunchwrap & Tostada Made With Cheez-Its
By Emma Garza
'Friends' Creator Marta Kauffman Opened Up About Misgendering A Guest Character
By Grace Wehniainen
Kimberly J. Brown & Daniel Kountz Looked Back On Their ‘Halloweentown’ Romance
By Stephanie Topacio Long
Get Even More From Bustle — Sign Up For The Newsletter