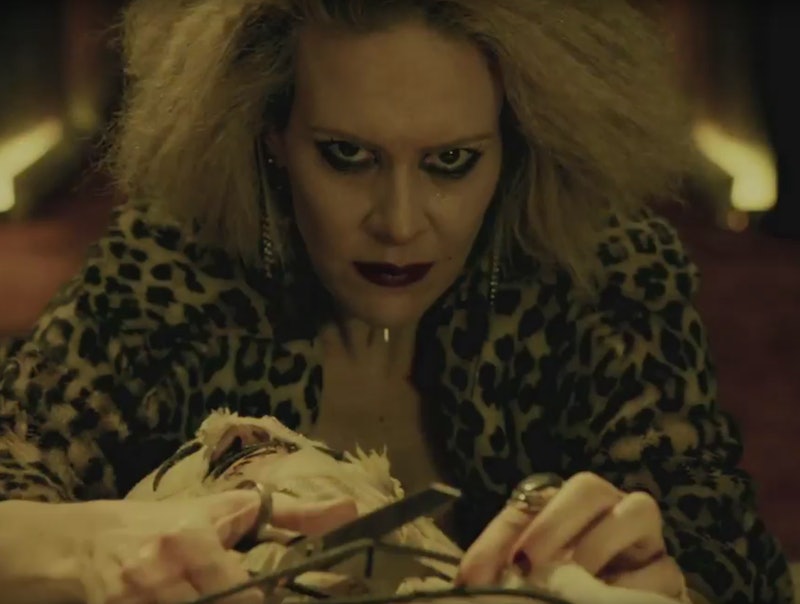 Are you sitting on the edge of your seat? You should be, because with the amazing news that 'American Horror Story' has been renewed for Season 6, it's time to play our annual AHS game of "Where will next season be set? And what will it be about?"

As the reigning supreme (no pun intended, AHS: Coven, fans!) of TV horror fun, AHS is currently a ratings heavyweight, so it comes as little surprise that the show will be returning in 2016 (under the usual delightfully devious watch of show co-creators Ryan Murphy and Brad Falchuk). As eagle-eyed fans of the show know well, Murphy and Falchuk like to leave little clues throughout each present season of AHS as to where the next season will be set

Whilst it's still way too early for all of us to be pouncing on minor details of AHS: Hotel and over-analyzing the lyrics of every Depeche Mode song that gets played throughout (what does it all mean?), there's still plenty of sensible guessing to be done as to where Season 6 of AHS could be headed next year. According to Entertainment Weekly, Murphy has teased the idea that there could be two seasons of AHS in 2016 (one in Fall and one in Spring), with the show potentially not being "opulent" but "more rogue and more dark."

So, what will Season 6 of AHS be about and where will it be set? Here's a few ideas.

There's been speculation amongst fans about there being a season dedicated to space exploration since the alien abduction story arc in AHS: Asylum, and adding kindling to that fire is AHS regular cast member Evan Peters who got just a little bit giddy over the idea in a recent interview with Vulture, saying: "It's not as sexy as some of these past seasons, but space is very intense, and there are a lot of things can go wrong. Alien creatures. People going crazy up there. There's a lot that could happen". Whilst Murphy has been vocal about the fact that we won't be seeing American Intergalactic Story any time soon, I'd hate to think that stories pertaining to space, aliens and even Area 51 are completely off the table just yet.

In a terrifically insightful interview with Deadline back in 2013, Murphy admitted that he originally wanted Season 3 of the show to be centred around Charles Manson but dropped the idea due to it not being "respectful to the victims," alongside it being difficult to gain legal rights around a real life individuals life.

It would be slightly foolish to think that Murphy had scrapped this idea altogether though — especially when considering how he uses real life cases to form the influence of many of his major characters and arcs (such as James March in AHS: Hotel being based upon the psychotic H. H. Holmes). It would also give Murphy the opportunity to continue building on the inter-season connections that fans have picked up on so far. Could some of the killers from past seasons be connected by the thread of a murder cult?

Cabin In The Woods

Perhaps one of the most well known horror settings out there, stemming from movies such as The Evil Dead and Friday The 13th, the trope of a bunch of youngsters heading to a cabin in the woods for isolated party times or romantic getaways only to become attacked by masked murderers or a demonic presence is a tale as old as time (or, you know, dated back to the '70s or whatever). It would also give AHS plenty of room to do exactly what it does best; exploring mythologies throughout history and urban myths alongside its usual themes of sexuality and race and gender politics.

Speaking of AHS's propensity for developing dark commentaries about American society, prison would be a more than perfect set piece for these themes to be defined with the sort of dark execution that the show is known for. If Murphy is looking to take the show in a less "opulent" direction, then prison is the place to do that and no less horrifying for it. The Stanford Prison Experiment, in which the psychological effects of being either the prisoner or the guard were studied by Stanford University (with horrifying results about a potential sadistic streak at the heart of human nature), has been a setting put forward by fans since the early days of the show.

Following the sad passing of horror legend Wes Craven earlier this year, it would seem fitting that Murphy may want to pay some kind of tribute to the Scream and Nightmare On Elm Street director by taking AHS into a meta, self-referencing territory of which Craven would be proud. Whilst

MTV's Scream: The TV Series may be trying it's own hand at meta-horror schtick, AHS could really do something fresh with the idea, especially if the show will enjoy two seasons as Murphy has teased. Imagine it: AHS: Spring could be a standard AHS story, complete with monsters, serial killers and horrific murders whilst AHS: Fall could take the route of Wes Craven's New Nightmare and pit the actual actors in their real-life settings, against the monsters of the previous spring season.

We've gone back in time a whole lot so far in AHS, but what if we got to go forward? And what if life simply ceased to be? AHS could do an apocalypse storyline like nobody else, and while serial killers, vampires, witchcraft and hauntings can all be scary in their own right, there's nothing scarier than imagining humanity turning on each other when their loved ones are dead, essential supplies are running low and where basic law and order no longer exist.

We'll have to wait to see what other clues and vital titbits we'll be thrown between now and the start of season 6 production, but one things for sure, AHS is on a roll right now and given how crazy AHS: Hotel has been, don't be surprised if Season 6 is the most shocking one yet.