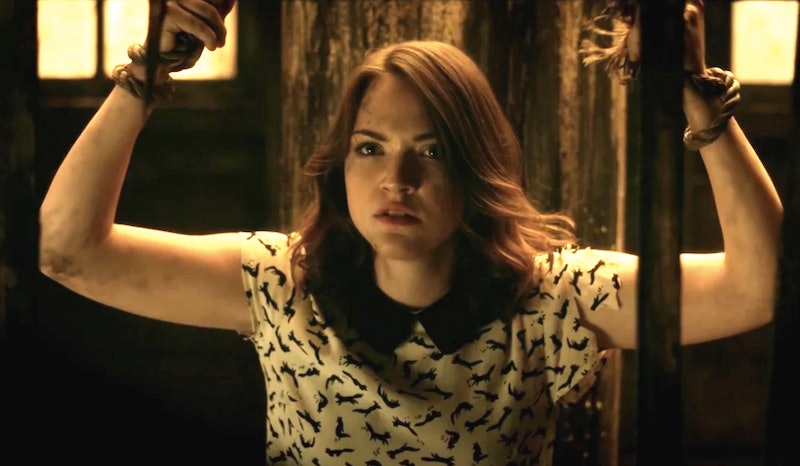 Barry Allen might have plenty of problems to deal with in his world, but I'm just as interested in the lives of everyone over on Earth-2. They have a monorail, they dress like Star Trek characters under an Instagram filter, and they provide alternate lives for characters we think we know that make them even more interesting. For example, who is Harrison Wells' daughter on The Flash ? Not only does she exist on Earth-2, but she has been kidnapped by Zoom. TVLine's casting announcement for actress Violett Beane on The Flash confirmed that she is playing a DC comics character and speedster named Jesse Quick on the CW series, which makes her introduction as the daughter of Harrison Wells particularly noteworthy.

Presumably, on Earth-2, both Harrison Wells and his wife Tess Morgan are alive. I'm guessing that they are both Jesse's parents as well, though that isn't necessarily the case. In the scene between Jesse and Zoom, she was wearing a shirt with foxes on it. Do you think they are quick brown foxes? Hilarious!

In the comics, Jesse is the child of Jonathan and Elizabeth Chambers, also known as Johnny Quick and Liberty Belle. She is also from Queens, which I find endearing. In a comic book universe that has Central City, Star City, Metropolis, National City, and Gotham City, I'm glad (and a little bit confused) that Queens and New York City still exist. Jesse Quick interacts with Linda Park, Wally West, and Bart Allen in her many adventures. She's not a metahuman, she was taught how to become a speedster. She also served as the business manager of the freakin' Justice League. That's right! She's kind of a boss, and also managed her father's media company, Quickstart Enterprises.

What does it mean that The Flash has decided Jesse Quick will be Harrison Wells' daughter? Quickstart Enterprises is nothing like S.T.A.R. Labs, but in the comics Johnny Quick did discover how to be a speedster using a mathematical formula known as the "speed formula" — which doesn't seem too unlike the "Harry" we love to hate on The Flash. Could Harrison Wells be a version of this classic speedster in Earth-2? After spending most of Season 1 trying to figure out who Harrison Wells is in terms of the comics, I love that this is still a question in Season 2.

One of the things that this season has brought to light is the abundance of speedsters in the multiverse. Surely, not all of them are metahumans. The powers that manifested after the particle accelerator explosion do often overlap with characters on The Flash , but not everyone has powers like Peek-A-Boo or The Mist. Since The Rogues, a group of villains started by two people with advanced gadgets instead of super powers, are one of the series' most formidible foes, it would be interested to see a speedster come along whose power was manufactured instead of accidental. Hey, wouldn't that also explain Harrison Wells' comment about "creating" Zoom? Perhaps we are about to see the speed formula in action on The Flash, and Jesse Wells will become Jesse Quick, um, quickly.