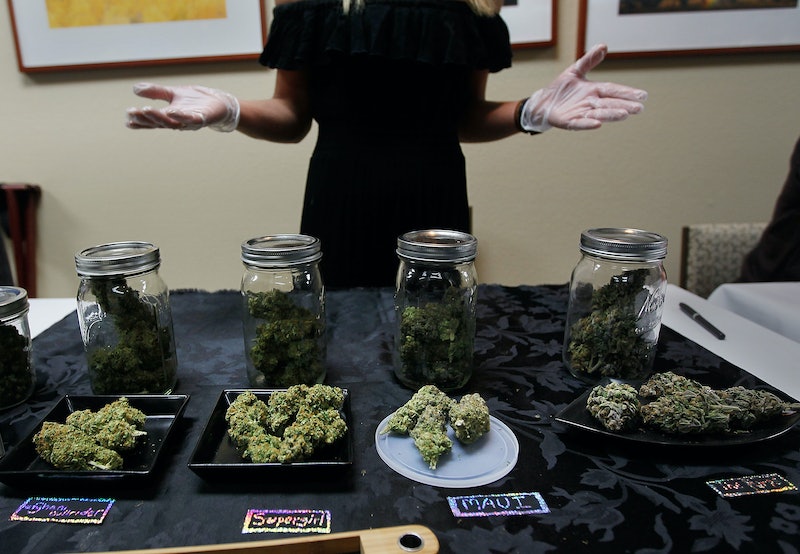 My first attempt at buying legal weed in Colorado didn't work out so well. Lesson learned: don't try to buy drugs on a Sunday. Other lesson learned, as my parents were kind enough to point out: apparently I am so far from cool that I can't even manage to score weed when it's legal. Thanks, guys.

This time, my friend and I are determined to be successful in our marijuana tourism expedition. (It's for the sake of journalism!)

Attempt #2: Back to Denver

This day already seems more promising than our first trip. The snow is melting, the sun is shining, and the polar vortex appears to be a thing of the past.

But we are punished for our cockiness when we go to find parking and encounter some sort of parade involving dozens of people riding horses down the street. Some of them have costumes. All of them are in our way. But it's hard to be mad at ponies.

We find parking, and head back to the LoDo Wellness marijuana dispensary. This time, they're open! Hooray! So the ponies were a good omen.

The store is located in a large basement space. We descend the stairs, the faint smell of pot growing stronger as we go.

At the bottom of the stairs, we pause for a moment to take in the zen of the store. (Note the Buddhas.)

The dispensary is so large and open that we aren't immediately sure where we're supposed to go. Fortunately, one of the employees calls us over to her desk. She's supremely cheerful as she checks our IDs by scanning them. When asked, she assures us that the dispensary doesn't keep a record of the IDs they've scanned. She even flips the scanner around to show that the only cord coming out is the power cord (and refrains from calling us nerds).

Seeing that we're taking pictures, she makes sure we don't miss getting a shot of "the ladies" who are happily growing just behind a window. (To avoid illegal marijuana trafficking, all Colorado dispensaries are required to grow their own product — on site, or otherwise.)

Having verified that we're 21, we are each handed a red ticket that looks like something you'd get at an arcade.

We're then directed to a smaller room, which is separate from the medical marijuana area that LoDo Wellness also operates. (Since smoking is not allowed in dispensaries, their comfortable main room seems to serve mainly as a waiting area for medical marijuana users who are called back one at a time.)

Once inside the store, we immediately notice their fine selection of bongs:

We step up to the makeshift counter. The two employees both have the universal, distracted attitude of sales people who already know they don't have to work much to make a sale. There's also a vaguely stoner vibe, though that may have more to do with the smell in the air.

The store has sold so much product in the mere eight days they've been open that they are already running low on marijuana. Customers aren't allowed to buy more than three grams at a time, and they are completely out of hash and edibles. Our dreams of magic brownies are crushed.

I look at the selection of a dozen or so jars...

...and am immediately bewildered.

I tell the sales person that I've never bought my own weed before, but that I want whatever kind will make me the relaxed sort of stoned.

He tells me that he can give me a gram of three different varieties so that I can try them out and see which I like best. I'm like:

Marijuana in hand (in a very classy brown paper bag no less) I step up to the register and hand over my ticket.

I pay for my weed in cash. (Though soon, I may be able to pay for bud in plastic.) For three grams, it's $60. That means an ounce would cost about $560. I guess that's what happens in a free market when demand is high and supply is low.

I walked out of the store the proud owner of three grams of weed.

And a stylish paper bag!

So what's next? Perhaps it's time to try out some edible recipes...

More like this
The Cabincore Home Decor Trend, Explained
By Jessica Goodman
The Guide To “Witches Stairs” & Why They’re Actually Great For Small Spaces
By Emma Garza
The Best Thread Count For Sheets To Stay Cool
By Lauren Moison
The 9 Best Easy-To-Use Coffee Makers
By Vanessa Spilios
Get Even More From Bustle — Sign Up For The Newsletter