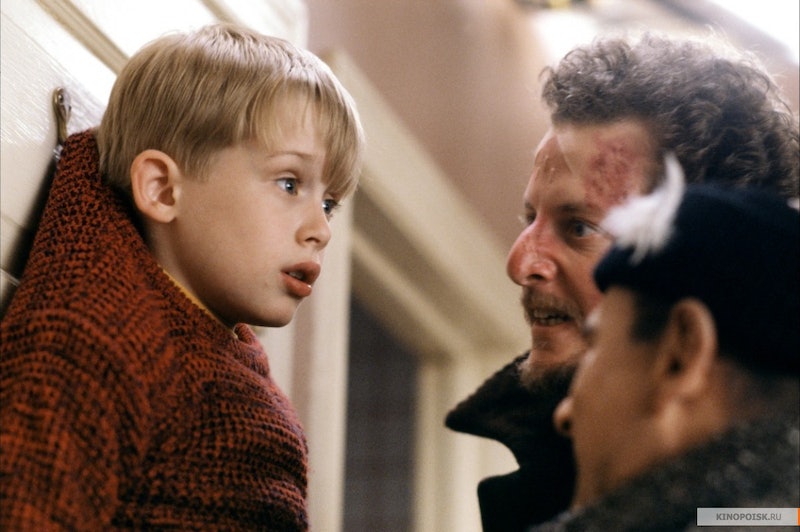 It’s almost time for all things holiday-related and wonderful, which means that breaking out the gallon tubs of popcorn, stuffing your face full of Reese’s Christmas trees, and spending an exorbitant amount of time rewatching the movies from your youth is totally acceptable. One of my favorite things to do this time of year is watch the same movies that I’ve been watching every year since I was old enough to concentrate on a screen for more than an hour. So basically, my whole life. And one of my absolute favorites, of course, is Home Alone .

But watching this movie now, as an adult, is a completely different experience. Witnessing Kevin McCallister enact an entire evening of violent shenanigans hits a little differently when you are an actual grownup. The stunts that he pulls seem incredibly dangerous, and the gun that he wields is decidedly terrifying.

For many viewers, it has been 25 years since the first time they saw the film, but watching it as a child in 1990 is a completely different experience from watching it as an adult in 2015.

Here’s what I noticed watching Home Alone as an adult. And let me assure you, it is a completely different experience.

1. That House Is Huge

I think I thought back then that the McCallister’s house was pretty big. But as a land-bearing adult in her 30s, I can guarantee that “middle-class” home in the Chicago suburbs probably goes for a cool couple mil. Easily.

2. The Interior Decorating Is On Point

Every single thing in that house is either red or green. You probably didn’t even notice it, but whoever was responsible for the sets on that movie did a bang-up job of making every single room scream "Christmas."

OK, this was an eye-opener. I think when I was kid, I thought Kevin was totally valid in feeling picked on. But as an adult who sometimes has to interact with children, he seems like a complete shit to me. He interrupts his mother’s phone call, he talks back to her, he tells her to hang up and make him pack his bag, he calls her a dummy, and he tells her that he doesn’t want to see her for the rest of his life. Seriously, by the time she sends him upstairs, I am convinced that he deserves to be left home alone.

4. There Is So Much Foreshadowing

It’s all over the place. Like when Kevin’s dad tells him to pick up his Micro Machines because he’s tired of telling him to do it. Wink wink, nudge nudge.

5. Buzz Is A Horndog

Whether it’s the unlaced rain boots or the bloody rag wrapped around his hand, this guy is so, so scary — even when you’re an adult.

7. That Pizza Delivery Guy Is A Terrible Driver

Seriously, who hired him? How does he hit that lawn jockey statue twice?

8. The Fact That They Happen To Throw Away One Ticket And One Passport Is… Convenient

I have to say, all of the events leading up to Kevin being left behind are pretty masterfully done. It’s like a study in narrative cause and effect. But that moment where Kevin’s dad is sopping up the spilled milk and just happens to throw out one passport and one ticket is a little too convenient for my taste.

9. Why Is No One Concerned That There Is A Police Officer Hanging Out In The Foyer?

That’s pretty attention-grabbing. I’m pretty sure if a cop showed up at my door, I would look alive and, you know, stop packing for my international vacation.

10. If There Were Cellphones, None Of This Would Have Happened

I’ve said it before, and I’ll say it again: This movie could have never been made today. Battery backups and cellphone alarms would have prevented the whole “we slept in” from ever happening.

11. They Leave The House With Only 45 Minutes To Spare, And Still Make Their Flight

12. That Basement Is Super Creepy

Seriously, why do they have so many mannequin parts down there? I counted three.

13. What The Hell Kind Of Furnace Is That?

Because I’ve never seen one with metal grates that open and close in my life.

How that never caught on and became a fashion craze, I’ll never know.

15. Buzz Has All The Makings Of A Sociopath

His box of treasures is terrifying. He’s the kind of kid teachers would keep their eye on in today’s world.

This is where things get really clear for the adult watcher. A BB gun as a kid? COOL. An 8-year-old walking around with a gun strapped to his back as an adult? Absolutely horrifying.

17. Angels With Filthy Souls Is Not A Real Movie

Why I never think to put marshmallows on mine is beyond me.

19. That Sled Would Not Go Out That Door

OK, I don’t mean to be a party pooper here, but with that staircase as far to the side as it is, and that door dead center, it would be physically impossible for Kevin to make that angle without some sort of steering mechanism.

I would seriously be spending my time cowering in the corner and crying myself into a stress coma if I were home alone and my house were being broken into. As a child or as an adult. Let’s be real.

Clearly, it’s an emergency, not a family crisis.

22. These Parents Would Probably Be Arrested Today

23. What Kind Of Cop Just Knocks On A Door And Declares That There’s Nobody Home?

Bust down that door and save the kid!

24. Buzz’s Shelves Are Totally From Ikea

The fact that they can barely hold a petite 8-year-old boy makes it pretty obvious that they were made in Sweden and out of particle board.

25. Jimmy From The General Store Is Straight Out Of A Norman Rockwell Painting

Or a Leave It to Beaver episode. I love it.

26. Why Does Kevin’s Grocery Cart Look Exactly Like Mine?

Mac and cheese. TV dinners. The smallest bottle of Tide imaginable. Check, check check. The fact that I am shopping like an 8-year-old makes me want to seriously reevaluate my lifestyle choices.

27. Kevin’s Personal Growth Is So Real

I definitely never noticed how much Kevin changes throughout the film when I was a kid. He goes from not being able to even pack his own suitcase to doing laundry, facing his furnace fears, and beating the bad guys. His personal development is seriously the stuff of narrative genius.

28. That Church Is Really Empty For Christmas Eve

I think there are, like, five people in attendance. I don’t know about the suburbs of Chicago, but the churches I go to are standing-room-only on Christmas Eve.

29. These Bad Guys Are Really Determined

I personally would have given up after having my hand branded, my foot impaled, and my hair burned off, but that’s just me.

30. Kevin’s Self-Awareness In The End Is Awesome

Think about it: He admits to being a jerk to his family as he’s talking to Old Man Marley, and he even helps the old guy repair his relationship with his son. That Kevin turns into a super mature kid.

31. This Movie Is Totally About Facing Your Fears

As a kid, I definitely didn’t get the larger themes at play here, or how applicable they were to my life. To me, this movie was all about cool ways to make bad guys feel pain. (Clearly, my analytical skills weren’t refined yet.) “Aren’t you a little old to be afraid?” Kevin asks Old Man Marley in the church. The answer is no, Kevin. You're never too old to be afraid.

It might be a completely different experience to watch this movie 20+ years later, but it's totally worth it.