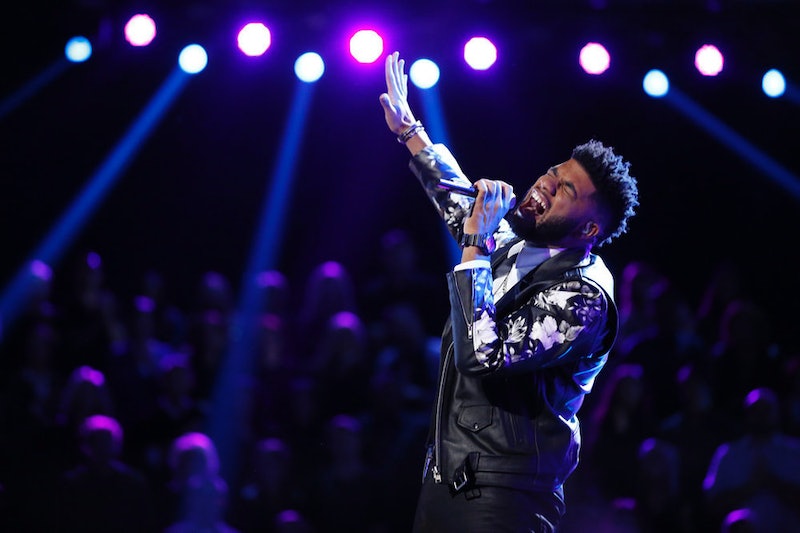 It's official — the talent on this season of The Voice is UNREAL. Among the best of the bunch is Team Pharrell's Mark Hood. Hood proved himself again tonight in the Live Playoffs with an energetic performance of Justin Bieber's "What Do You Mean." I wasn't sure what to expect from his performance at the beginning, since he is such a different artist than Bieber, but Hood managed to surprise me once again with a fun, well-executed performance. If he hadn't already, Hood definitely sang and danced his way into the hearts of the voters tonight and earned himself a one-way ticket to the Top 12.

Hood continues to impress the coaches week after week to the point that I'm starting to wonder if there's anything he CAN'T do. While he began his journey on this show as a funky jazz artist, he broke the mold tonight with a current pop/R&B hit. This performance showed his versatility and proved that his old-school style has a place in the modern music scene. His smooth vocals and charming personality certainly appeal to a broad audience which gives him all the tools he needs to win the votes of fans this season.

It's obvious that Hood is good, but is he good enough to win The Voice? Well, it's no secret that this season is packed with talent, but Hood definitely has a fighting chance — it just depends on what the audience is looking for. Hood is the only one of his kind on this season, which is a major advantage if that's what the audience wants. If they're looking for a country or more alternative artist, though, he's definitely out of luck. The good news is that the most recent winners lean towards the country and alternative sides, so the audience may be looking for something different. If that's the case, then Hood may have this season in the bag.