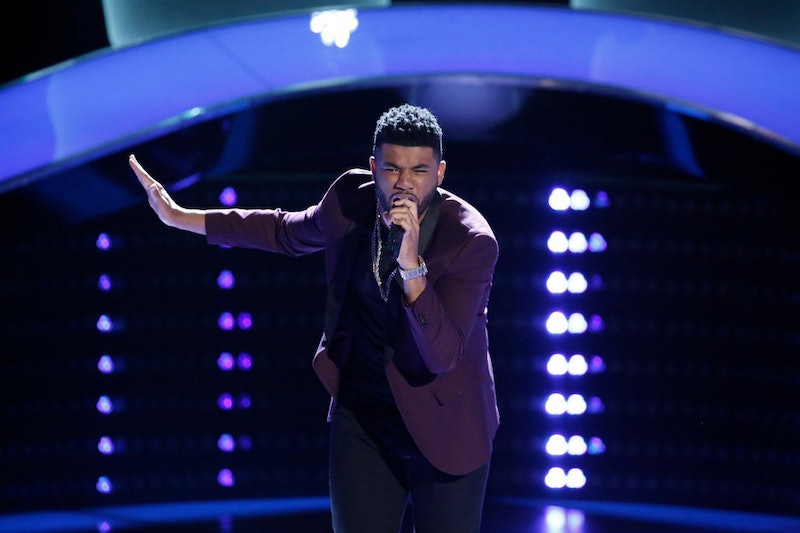 The Voice is back, people! And the show is already off to an amazing start thanks to 24-year-old Mark Hood, who opened The Voice S eason 9 up with a four-chair turn! The Chicago native wowed the judges and set the Twitterverse on fire with an energetic rendition of Bill Withers' "Use Me." After a heated battle and plenty of schmoozing from the judges (ahh, how we missed this!), Hood ultimately chose Pharrell as his coach, setting himself up for a very fruitful run in this competition. Though it's pretty early in the game, it's safe to say that Hood may already be a frontrunner.

Hood is no stranger to the stage. He started singing in church as a boy then pursued theater after graduating from high school and has even graced the small screen a few times since! Though his proudest role was a non-speaking one (he played a dead body!), he clearly learned how to let his charming and goofy personality clearly shine through his voice. This is what made his performance so irresistible! His personality was backed by strong, jazzy vocals, which had the coaches jumping for their buttons as soon as Hood starting singing.

From his goofy charm to his killer vocals, Hood is guaranteed to become a fan-favorite in no time (if he isn't already!). But is it too early to tell? Not quite. The Voice season 8 winner, Sawyer Fredericks, became a fan favorite as soon as he hit the stage for his blind audition and was able to ride that wave all the way to the finale. As long as Hood continues to grow his talent every week (which won't be an issue with Pharrell as a coach) and keeps up the charm, he'll be able to basically solidify a spot in the live shows.

More like this
Harry Styles' 'X Factor' Audition Didn’t Start Off As Well As You Thought
By Jake Viswanath
'RHOBH' Star Diana Jenkins’ Fiancé Asher Monroe Once Shared A Stage With Kelly Clarkson
By Brad Witter
Why Did Hayden Get Sent Home On 'The Bachelorette'?
By Alyssa Lapid
Everything To Know About 'RHONJ' Season 13
By Brad Witter and Jake Viswanath
Get Even More From Bustle — Sign Up For The Newsletter