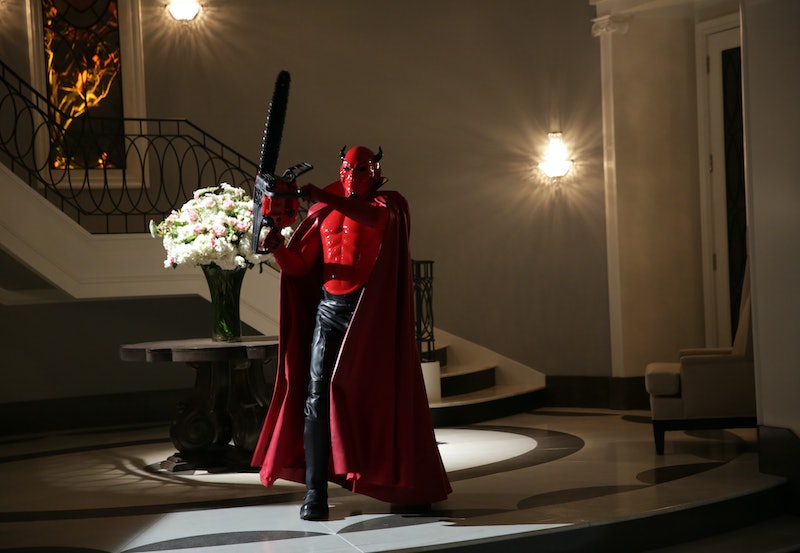 As if the Nov. 10 episode "Mommie Dearest" hadn't provided enough shocking reveals, during the final moments we learned that Boone is the Red Devil on Scream Queens. Well, he's one of the Red Devils and he's hanging out at the gym in a ridiculous disguise as he vents to his fellow devil that, "all I do is work out and kill people. I'm sick of it." Also, he's had it with Gigi — especially after she pulled that stunt of showing up at Munsch's in an Antonin Scalia mask that she found in a discount bin. Yeah, apparently the group didn't all agree to that plan. (And, I have to take Boone's side on this one — that cheap Scalia mask looked a little out of place next to the two Red Devils.)

So, who's the other Red Devil? Well, earlier in the episode we were hit with another doozy — there are two bathtub babies, one boy and one girl. Grace and Pete paid a visit to the painter at the mental hospital (after all, she does paint every single person who checks in there) and, sure enough, Gigi was once a patient. The painting of Gigi holding a baby wasn't much of a surprise — after all, we've known for quite some time that she's the Hag of Shady Lane and she's working with the Red Devils. But, seeing her holding two babies was something no one predicted.

It now seems likely that Boone is the boy born in the bathtub, and the other Red Devil may be his twin sister — but it's still too soon to rule out other characters. (Looking at you, Wes.) Boone's conversation also implied that Gigi isn't the mastermind behind the killings as many of us believed — he comments that she's no longer "useful" to them and she's messing up their plans.

Every time we get one answer on Scream Queens, it only leads to more questions. How did Gigi get involved with the Red Devils — and what will Boone and his partner do to her now that they've decided she's simply in the way? And, I hate to harp on this point, but who the heck is the girl born in the bathtub? Many fans are speculating that it's Hester and she's working with Boone:

If "Mommie Dearest" is any indication, the rest of the season will be full of shocking reveals — and plenty more murders, of course.