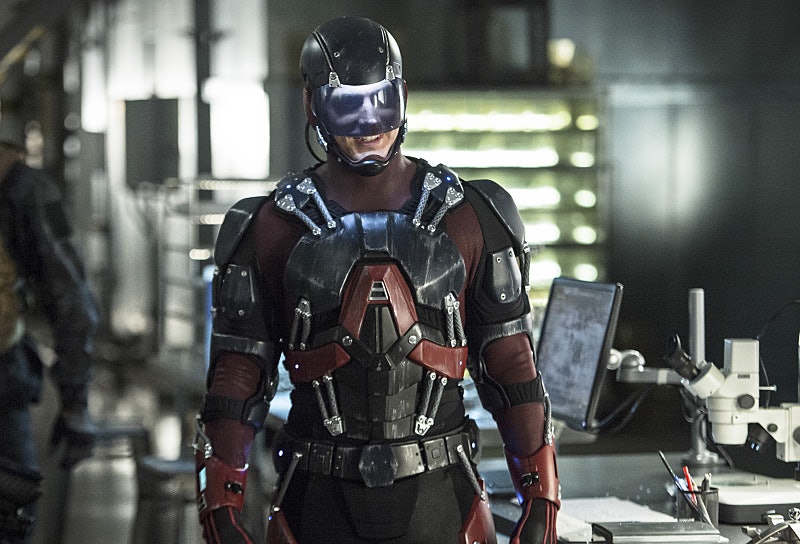 Surprise! Ray Palmer is alive. As plot twists go, the survival of the Atom didn't pack a lot of punch. Brandon Routh is one of the central characters on the upcoming Arrow/Flash spinoff, Legends Of Tomorrow. So, unless a third trip to the Lazarus Pit was going to be necessary — and I don't think I could take that stress — fans could bet that Ray hadn't died in the A rrow Season 3 finale, like all of Team Arrow assumed. Felicity has now seen the proof of life in the form of a video message that Ray left for her. The question is then, who has Ray Palmer and why? Before Felicity comes to the aid of her ex, she'll have to get to the bottom of the opposition's motives.

In last Wednesday's episode, "Haunted," Felicity's Palmer Technologies right-hand man Curtis went hard on the energy drinks to painstakingly de-crypt what Felicity assumed was just a final audio diary of Ray's. She'd been putting off listening to the recording to spare herself the pain of hearing his voice. And Felicity hadn't caught the link between the encrypted file and the recent technological possession of her cell phone. Ray has been desperately trying to get through to Felicity and enlist her help. Even hyped-up Curtis has nothing to say once they're finally able to hear and understand the recording. "What I need you to know is, I'm alive," Ray's voice says, calmly. "And I'm in trouble."

All roads this season are leading back to Damien Darhk, the mastermind in charge of HIVE. The official CW synopsis of Wednesday's episode, "Lost Souls," explicitly connects Darhk to Ray's kidnapping.

Felicity is frantic when she learns that Ray is alive and being held by Damien Darhk. Felicity’s guilt over not finding Ray sooner causes tension between her and Oliver. Meanwhile, Sara joins Laurel, Thea and the team on a rescue mission for Ray. However, the effects of the Lazarus Pit take over and threaten to jeopardize the entire operation. Donna Smoak (guest star Charlotte Ross) returns to Star City.

Damien Darhk's plans are spreading through Star City like a cancer, and he's the kind of villain who plays his cards close to the chest. When he offers information, he only does it because he knows that what he withholds far outweighs what he shares. Darhk hasn't advertised that he has Ray Palmer, so his kidnapping isn't a trap to lure Team Arrow — at least not yet. His interest in Ray must lie in the ATOM suit, or another one of the genius' technological advancements. Routh hinted at what drives Darhk in a recent interview with Entertainment Weekly.

Damien’s motivation is to understand my technology, and then maybe when he finds out a connection, to bait whoever may be coming after me.

The implication? Felicity, who's already leading the charge in located Ray in the clip below, is definitely courting danger by getting involved. But Team Arrow never leaves a man (or a Canary corpse) behind. Hold tight, Ray — your fellow heroes have been engaged.