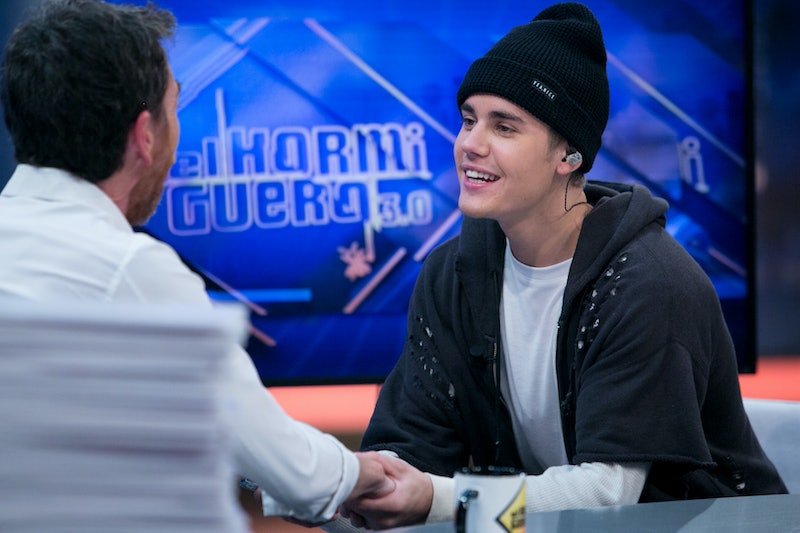 The Belieber fandom is awash with joy at the moment, and, no, not because Justin Bieber's Purpose album is set to be released on Friday. During his appearance on The Ellen DeGeneres Show on Wednesday, Bieber announced the Purpose tour, with the option to purchase your tickets early available on DeGeneres' website. That's right: not only does he have a tour coming up in the next six months, but we already know that it kicks off on March 9, so we know what day to clear our schedules for even if we don't have an actual ticket yet. And you'll want to get a ticket. That goes out both to Beliebers and non-Beliebers, because, if there's one Justin Bieber tour you don't want to miss, Purpose is definitely that tour.

Bieber was nothing if not charming while announcing the tour — especially since that was basically all he said. When DeGeneres asked him for more information about the tour, Bieber was quiet for a while before admitting that he'd forgotten "the one thing I had to remember," which was, oh, at the very least when the tour starts. Luckily, a graphic popped up on the video to inform the viewers that the tour launched in March, with further information to be available both on Bieber's website and on DeGeneres' website after the episode airs. However, DeGeneres' website will come with an added surprise: entering the password "ellenjb" will give you the chance to get tickets to the tour before they go on sale next week.

While the actual dates for the tour are not yet available, nor are the ticket prices, Beliebers are already going crazy at the idea of getting to see their idol on the road once more. But, even if you don't have "see a Justin Bieber concert" on your wish list, at least one show might be worth checking out. The great strides that Bieber has made as a performer, as an entertainer, and, more importantly, as a person in the last year alone means that Purpose marks a new era for the pop star. Heck, just charting the progress he's made between his last album and this one is kind of revolutionary, as long as he keeps it up. Maybe you're not a fan of Bieber's music, and that's fine. Different strokes for different folks. But, if you've been keeping yourself away from the Belieber bandwagon because you didn't like him as a person, it's probably about time to change that.

This marks the first time in recent history in which Bieber has apologized and then followed his apologies with an actual change in behavior. This marks the first time in recent history that anyone but his Beliebers were interested in seeing the kind of person that he was growing into. I want that maturity for Bieber to be rewarded with a reflection in the number of people buying his concert tickets, because he definitely deserves to have pulled in a whole wealth of new fans with his personality reform and his musical growth. I think that Purpose has the potential to be the greatest tour that Bieber has ever done, honestly. Do you really want to miss it?

It's about time more people join the craze of the Biebs, even if they won't call themselves actual Beliebers. The Purpose tour is your chance, but, if you need to wait to hear the full album on Friday before you make any wild decisions about your money, that's understandable, too. I guess.

More like this
Yes, That's Lindsay Lohan's Sister Singing In The 'Falling For Christmas' Movie
By Radhika Menon
Taylor Swift Fans Sue Ticketmaster For The Eras Tour “Ticket Sale Disaster”
By Jake Viswanath
Dolly Parton Joins TikTok & Debuts A Song About Baking
By Jake Viswanath
Spotify Wrapped 2022: The Best Celebrity Reactions To Their Streaming Stats
By Radhika Menon
Get Even More From Bustle — Sign Up For The Newsletter