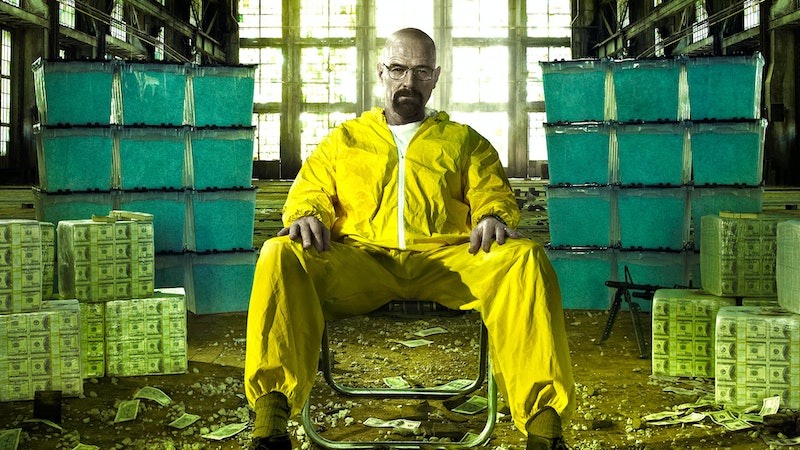 I know it's been over two years since Breaking Bad went off the air, but I'm still not over it. I got into it pretty late in the game but caught up relatively quickly (thank you, binge watching) and became totally obsessed. By Season 5, I just wasn't ready for it to end, and I can still think of so many loose ends that could have been explored in an extra season of Breaking Bad if they ever decided to give it to us. That'll probably never happen, but I guess all good things have to come to an end at some point. Thankfully, I'm not alone in my continued allegiance to the series, and our loyalty is paying off. Several Breaking Bad artifacts have been added to the Smithsonian's National Museum of American History in Washington D.C. for all to see, which is amazing news, right?

According to Deadline, the Smithsonian decided to honor Breaking Bad's cultural relevance by placing iconic objects from the series on display for fans to check out face-to-face. Included in the display are things like clothing worn by Jesse and Walt, a little blue bag of "meth" the pair were selling, and Los Pollos Hermanos cups — and that's just to name a few. Ugh, how good does that sound?

A ceremony was held at the museum on Tuesday, and Breaking Bad cast and crew were on hand to open the collection, including Bryan Cranston, Aaron Paul, RJ Mitte, Jonathan Banks, Vince Gilligan, and Melissa Berenstein. Obviously they appreciate what a big deal it is to have your show included at a national museum, which is a pretty amazing accomplishment. But I've seriously never met a single person who hasn't watched the show and totally loved it, so it makes a lot of sense.

The Breaking Bad display seems to be a permanent collection, so there's no hurry to get down to Washington D.C. to see it yourself (other than, of course, to continue feeding your Jesse Pinkman obsession). Either way, it's definitely worth a look if you're in the area or are going to be anytime soon. Personally, I'd love it if they set up a fake Pollos Hermanos that actually serves food so I could feel like I was inside the show. Just a suggestion.