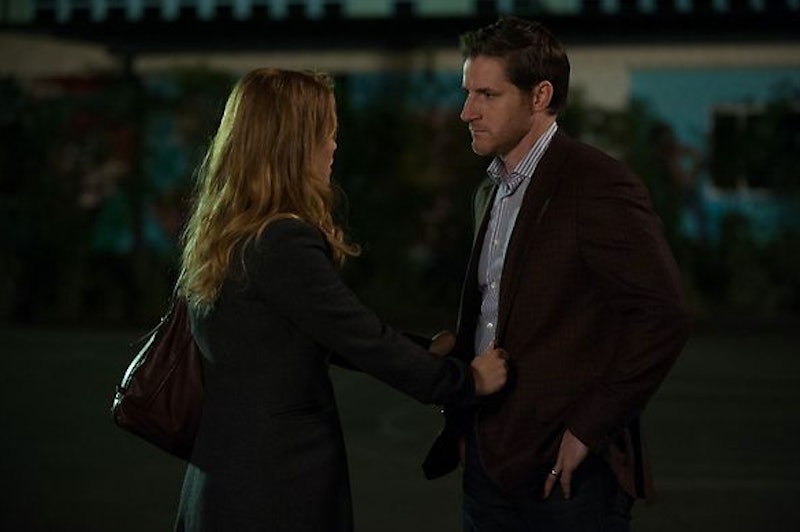 "What's left?" Amber asks Ryan in the first act of Parenthood 's "Stay A Little Longer." It's a valuable question, and one that the episode sets out to explore with its two most emotionally heightened story lines of the season. Amber's got to figure out what scraps of her relationship with Ryan she's willing to pick up and remember and which parts she has to store away or throw out in her struggles to cope. For Joel and Julia, they must figure out what's left of their marriage.

"I just don't get it. Joel is the greatest husband ever." That line comes from a gossipy mom outside the elementary school, but it's an echo of what Parenthood audiences have said pretty much every time Julia took her marriage to Joel for granted. One thing's for sure: She's not taking it for granted anymore.

Let's start with the less interesting (though still solid) Bravermans and work our way to the juicy stuff, shall we?

Carl comes to Sarah with his networking magic and relays a job offer for a huge new account. Hank's also up for the account, but he blows the interview, so when he finds up Sarah's up for it too, he pretty much immediately undermines it.

Sarah lands the job, and in telling Carl, we get (a rather predictable, but still sweet, and also bittersweet) confirmation that, yes, Carl is indeed less bitter and insecure than Hank, and therefore less likely to spread that negative energy to Sarah. That's a pretty nice quality in a guy, especially given that Sarah already has enough neuroses all her own; she doesn't need to be helped along in it.

It was also nice this episode to see her have a story related to a success in her career — even if that success is tied to a dude still. Baby steps, I guess? I dream of a day when Sarah Braverman lives a fully self-actualized fictional character life.

I don't know where Sarah's going romantically (and I don't really care; I care much more about her finding herself in other ways), but I did quite like when she and Hank re-set their working relationship with Sarah as the boss(ish). Regardless of whether they decide to be together "that way," they've got a good dynamic, and I'm glad the show seems invested in playing that up even if they're not sleeping together.

Crosby lets C-list rockstar Oliver Rome move in with him and his wife/10-year-old/newborn baby, which is... well, it's just straight-up a recipe for disaster, isn't it? Oliver Rome (sorry, can't ever just use one of his names) marvels at the mixed-race Norman Rockwell painting that is the Crosby-Jasmine lifestyle and then tries to teach Jabbar how to smoke before heading out to a booty call. Later he shows Jabbar Jaws, just for good measure.

Eventually we get a Jasmine-as-dancer backstory monologue out of it as she tries to psych Oliver Rome back into the recording studio. Jasmine should give inspirational speeches more often, it's very Braverman of her.

Max's friend Micah isn't his friend anymore, so Adam tries to reconcile them. It's a rather bleak storyline, focusing on the effect Max's Asperger's can have on his friendships: Micah's leaving Max behind in large part because the other kids think Max is weird. And, unfortunately, Adam and Kristina can't fix all of their kids' problems all of the time.

Ryan comes to move the rest of his stuff out of his and Amber's love nest (sorry for just saying "love nest"), which is generally heart-wrenching, especially with Amber trying to put on her best Braverman braveface. "Do you wanna talk?" Ryan asks. "It's a bit late to talk, isn't it?" Amber says, obviously still harboring some anger over him reenlisting without telling her. "What's left?" she says, and it is a very good question — namely because of course there's something left; a love like that doesn't just evaporate.

Ryan explains to Zeek that he wanted Amber to be his life, as well as the whole Braverman family, but that he didn't feel like he was good enough for her. In a lot of ways, he's right, and we've discussed that at length all season long. But the thing is, that knowledge doesn't make the breakup of such a genuine love any easier.

Amber's pain is understandable: The most impactful romantic relationship of her life has ended, and she is left reeling with all the abandonment issues she's ever had and some extra tacked on for good measure. In real life, she might hold onto that resentment and let Ryan go without speaking to him again, and that ball in her gut might seem to stagnant eventually but would continue to grow.

But this is a TV show she lives in, and so she's got to say goodbye to Ryan one last time before he leaves. As Jasmine says to Oliver Rome, "You gotta get it out there. If you don't you'll always wonder."

And so she does, and Mae Whitman's acting has never been better (and that's saying something). Her anger and her pain is right on the surface, but it's still right below that incredibly caring, empathetic girl she's always been. And we get another beautiful Amber/Zeek scene out of it, too.

Julia goes full monty with her marital troubles and rushes into the gossipy mother's group daring them to ask them about her "affair."

And then Julia does an even braver thing: She talks to her husband. "I've been... pretty unhappy," she says, and I will fight any person who tries to tell me that everything that happened this season to this marriage all cruxes on faults of Julia's. Because while Julia can be among the more self-absorbed of the Bravermans (and that certainly is saying something), it takes two to take a marriage to these lows. And while Julia was suffering with her life decisions, Joel was ignoring them out of his own resentments. If this marriage is to ever be repaired, it will have to be repaired by the both of them. (If you're looking for more analysis on what that means, I recommend The A.V. Club's Todd VanDerWerff's truly great recounting of his own past marital issues in how they relate so fully to Joel and Julia's. There's a reason this show's emotional drama captivates so many: It's because, for all the network lighting and pretty faces, it feels real.)

Joel immediately sees Julia's confession of her friendship with Ed for what it's been all season long: An emotional affair, a betrayal of the life they've built together.

This is where Sam Jaeger brings in the big guns we've been hidden from all season: Joel's work performance starts to suffer due to lack of sleep due to those glaring marital problems, and suddenly I'm on Joel's side again — he's all sad and broken. But I haven't left Julia's side either. They're both adrift, neither really knowing how to properly reach out to one another. Or even whether the other would be there to help them if they did, or if they're willing or ready to help keep the other from drowning.

And then Joel says it: "I don't want to see a marriage counselor, because the marriage is not the problem, the marriage is you." He tells Julia he doesn't even know who she is anymore, and everything seems so hopeless. And maybe it is — maybe this marriage is over. Joel certainly thinks it is.

Whether or not these two ever see a divorce through to the finish line, one thing's for sure: This show's committed to portraying the dissolution of the commitment of these two characters. And while it hit some bumps getting going, the realism of the tension we're seeing here is everything the world's come to love about Jason Katim's contributions to television. This time, his contribution just happens to revolve around pain.