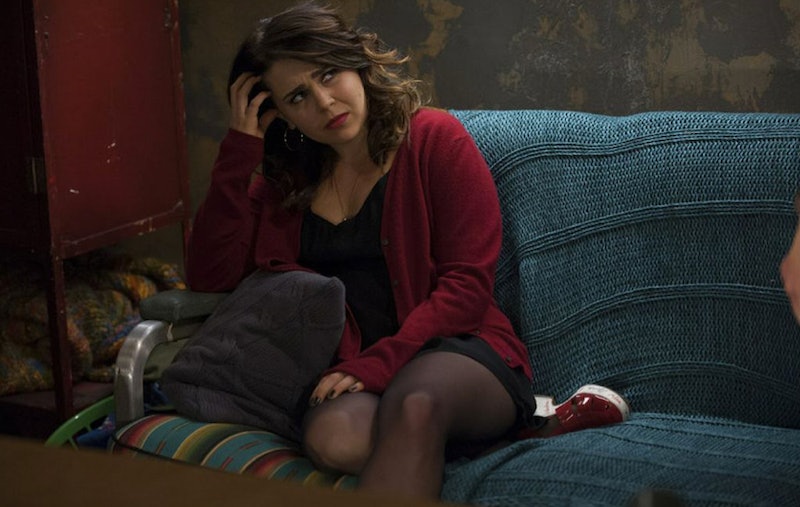 In a surprising feat for invisible little brother characters everywhere, it was Drew who got the last scene in the midseason finale of Parenthood. Don't get things twisted, though: This episode wasn't about him. No, this one kept pretty in tune with what the rest of the season has been: Focused on the drama in the young love of Amber and Ryan, and in the established relationship of Joel and Julia.

Let's do the usual and explore this in chunks, shall we? Starting with the easiest:

Two of these three weren't even in this episode, which was sad for them but a good momentary trimming of the fat overall. Crosby, for his part, had only a small part in this episode, and it was giving advice to Sarah's children. To Amber he shows concern about her relationship and warns her to do what's best for herself; for Drew he suggests promiscuity. Which....legit.

Sarah finally (finally) proves that her neighbor dude is there for a reason and sleeps with him. She's super awkward about it afterward, he's all "whatevah man it's cool." Then she comforts Amber — in one of their trademark joint crying scenes — about the fact that that man she loves is made 80% of raging Issues.

Kristina tries to get over her (100 percent predictable) loss of the mayoral race. She proves she's a trooper again and again, and then she and Adam egg a billboard of Bobby Little's face. It's a good time. Once again they make no mention the fact that Haddie exists.

Oh boy. Ohhh boy. *Sigh*. These two. We've been saying for weeks that they need to get their marital shit together and communicate and be nice to each other, and they got at least half of that right! They were nice and loving towards each other throughout almost this entire episode, making an effort, etc. But they're still not exactly...addressing their issues. Like, talking about what it is that caused that geographically epic rift between them this entire season?

This isn't as much a problem when everything's moving really smoothly for the two of them; it's when there are bumps in the road that things get sketch. Like when they find out Ed's separating from his wife and they don't talk about it when Joel acts all awkward to Julia about it. Like when Julia visits Ed to tell him to stop calling her and then...kissing happens. Like when they go on date night and Julia is all fidgety and weird.

We don't get any big explosion from these two this episode, but that's almost scarier than anything: The fact that they're not addressing these issues but very obviously going to need to very soon is almost as terrifying a cliffhanger as any of the ones involving guns or pregnancy tests that other shows employ. Because at this point it's anyone's guess if these two are actually going to make it through this.

It's been one of the most active questions of this season, bringing Amber's character more to the forefront than ever before: Can this young love last as long and as passionately as the two people involved in it want it to? After last episode — in which, for those who need the reminder, Ryan beat the shit out of Hot Drummer Dude from The Band — will we finally get some closure or at least some answers as to the obvious demons plaguing our boy?

The answer to these questions: Nope, and, actually, yes. Ryan, understandably, is facing what many people do when they come back from war: A sense that the many mundane facts of life people face away from the life-and-death are not quite as important or of consequence as what those in warzones are facing. He hates Afghanistan, but he misses it, too.

Unfortunately for Amber, she is very much a girl of the real world. Theirs is a complicated, genuinely interesting relationship: You see their love, it's plain as day on their faces, but unlike Amber (and, before, Ryan), you can't really root for it after a certain point, because, as Sarah says to her daughter "You're strong enough for this, but that doesn't mean it's what [we] want for you."

And so it ends, as it probably should. And who knows if Amber will fall in with this Hot Drummer Dude, or if she should (hint: He's hot and wasn't mad at her after her fiance beat him up, she definitely should). She's gonna hurt for a while. But we as an audience have an entire winter hiatus to start missing her and her perfect cryface, so we're damn ready for whatever comes next.