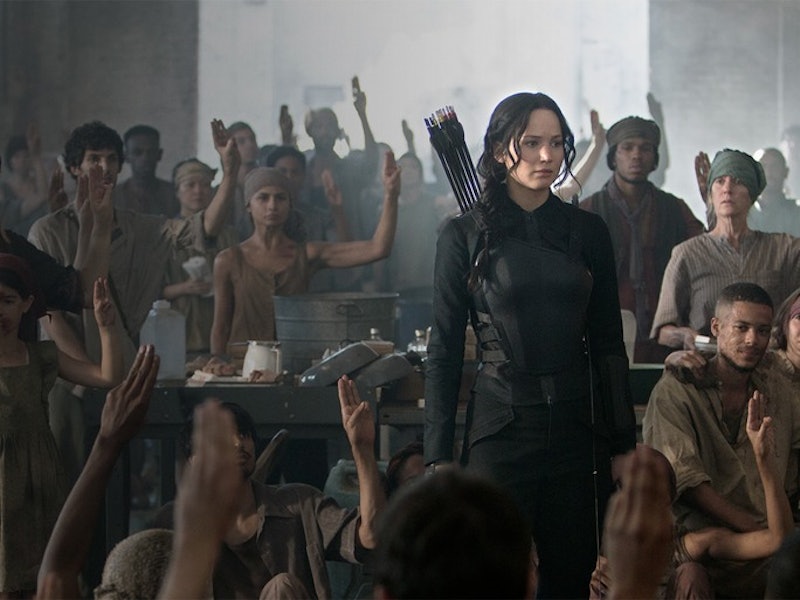 As the release of The Hunger Games: Mockingjay, Part 2 approaches, fans are starting to notice the absence of a Mockingjay, Part 2 official soundtrack. There has been no mumblings of a celebrity curated tracklist or any collection of original music for the film, and while a release of the score is still possible, it's not guaranteed. So, what gives? Well, we might just have to accept the idea that there might not be a Mockingjay, Part 2 soundtrack, and while it'd be an odd choice (seriously, why would a studio say goodbye to the profits a soundtrack would undoubtedly drum up?), judging by the lack of info so far, it seems like a real possibility.

Although, as said, it would be unusual. This is the last Hunger Games movie, and with it comes the final opportunity to release an album for the franchise. But before you start mourning the loss of a soundtrack that never was, it's worth considering that the absence of original songs from Mockingjay, Part 2 might actually be a good thing. The Hunger Games has always been a more serious franchise — one not defined by a teenage love triangle, despite popular belief to the contrary. Let's not forget, the Hunger Games phenomenon began with a film about a dictatorship that forces a group of children to kill each other once a year — not exactly light, Top 40 material. It's one thing to make a socially relevant and thought-provoking film or book using the slaughter of children as a plot point, but another to make a thoroughly manufactured pop hit inspired by that very story.

The absence of any such song suggests that the executives behind the much-maligned remixes of "The Hanging Tree" — the song Katniss sings in Mockingjay, Part 1 — have learned their lesson. Making a product like that, something so lighthearted and commercialized, out of The Hunger Games does a disservice to the very fabric of the story. It's the type of thing you'd expect from the Capitol, not Katniss or the rebellion she leads. (That said, Lorde's "Yellow Flicker Beat" from the soundtrack is one of my absolute favorite songs. So, it's not all bad.)

Aside from the point discussed above, the decision not to have a special soundtrack for the film also lends itself to the serious tone of the movie. The fact is, Mockingjay, Part 2 doesn't need any original songs to make it more interesting or digestible to a younger audience because it's not your typical "teenage" movie. Say what you will about the culture of young adult audiences or the prevalence of violence in media, but The Hunger Games doesn't underestimate its audience by sugar-coating its themes. Using the film as a way to market a random pop song would just cheapen the intention of the movie, making it more "kid friendly" instead of trusting its audience.

There's still a little over a week until The Hunger Games: Mockingjay, Part 2 hits theaters, and it's likely that the movie will be sitting pretty at the top of the box office for a while, so a soundtrack could be imminent. But, in the meantime, I'm happy with The Hunger Games just the way it is.