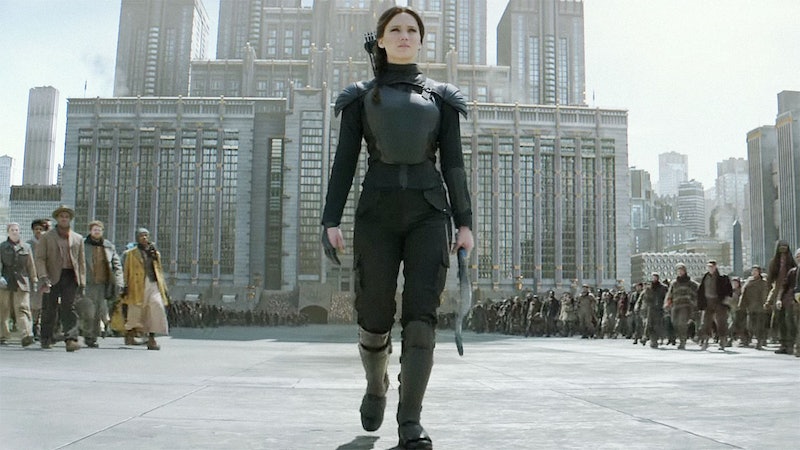 In strange movie news, the final Hunger Games film is gearing up to open theaters Nov. 20 and we're still without a blip of Mockingjay, Part 2 soundtrack info. Nada. Zilch. Zero. It's almost as bad as the long wait for Adele's new album (almost, but not quite as bad because Adele is a musical goddess and we are but her mere mortals). The Hunger Games has done pretty well for itself in terms of music choice and composition to match all the emotional highs and lows fans have felt throughout the previous movies. And, let's be real: once you have Lorde helping put together your tracks, you're pretty much only allowed do better from there.

Maybe it's the the pressure of not exceeding #LordeGoals that's keeping any Mockingjay, Part 2 soundtrack news under wraps? Or should we be gearing up for a surprise soundtrack drop of Beyoncé proportions? Either way, fans are currently still without new music to give us major dystopian and rebellion vibes, so I've come to fill the gap in your iTunes and Apple Music with some pretty dope recs and the lyrics to match, guaranteed to provide you eargasms while you await the film's release.

I always hear, always hear them talking Talking 'bout a girl, 'bout a girl with my name, Saying that I hurt you but I still don't get it,You didn't love me, no, not really,Wait, I could have really liked you, I'll bet, I'll bet that's why I keep on thinking 'bout you

It speaks to the life-or-death fragility that comes with fighting the good fight.

Let me liveThrough your viceMass appealI feel in ten breaths it's a miracle if we're still aliveCan you touch it? Is it real?Paper cards that I feelThe slightest rip is a river that's overflowing me

Did you think we'd be fine? Still got scars on my back from your knifeSo don't think it's in the past, these kinda wounds they last and they last.Now did you think it all through? All these things will catch up to youAnd time can heal but this won't, so if you're coming my way, just don't

Probably what all the characters in Mockingjay, Part 2 must have thought to themselves at one point or another.

It's fitting for Katniss' home town, District 12, and its destruction.

Katniss being a complete and total badass is represented well here.

7. "Adventure of a Lifetime" — Coldplay

It works with the legacy the Second Rebellion leaves, and the people who come out as its heroes.

The Mockingjay gang overcomes obstacles, even in the face of frustration.

This song understands the struggle of returning to daily life after the Hunger Games end for good.

This one gets that even at the end of the rebellion, nothing is for certain concerning the future.

I woke up in tearsWith you by my sideA breath of reliefAnd I realizedNo, we're not promised tomorrow

Last but not least, this is fitting the bittersweet epilogue.

Hello, it's meI was wondering if after all these years you'd like to meetTo go over everythingThey say that time's supposed to heal ya, but I ain't done much healing

Whether for the lyrics or the mood the music puts you in, these 11 songs would be great additions on the Mockingjay, Part 2 soundtrack. Or, you know — if one never comes out for some bizarre reason, you've got these sweet backup tunes to jam out to.