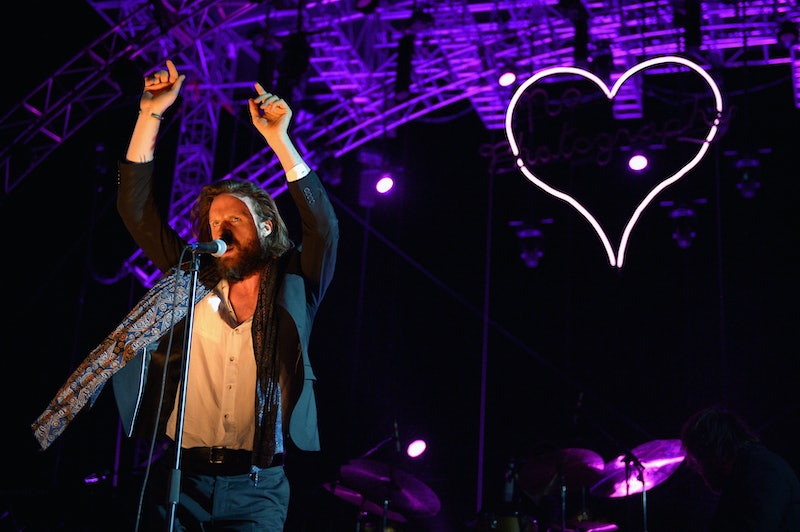 In the third episode of the newest great Netflix series Master of None, Dev (Aziz Ansari) is faced with a conundrum of epic modern proportions: who should he invite to Father John Misty’s secret show? When Arnold (Eric Wareheim) reminds Dev that the ticket he’s holding is akin to liquid gold, he agonizes over the person to whom he should bestow it. Should it be the intelligent journalist, the attractive waitress, or a woman who he simply identifies as “Headband”? Though the show uses this as a teachable moment where Dev learns the hard way that you shouldn’t be too superficial when making these decisions, some of us are super jealous of the rock and hard place that he’s stuck between.

Where’s our ticket to the super secret Father John Misty show? It’s recently come to my attention that some of you may be wondering what the hype surrounding this concert may be, why Dev couldn’t just invite his buddy Brian (Alan Yang), and who Father John Misty even is.

What makes this dude's secret show such a "Hot Ticket"? For those unfamiliar with the source of all of the contention, let me shed some light on this big, beautiful, bearded man.

That’s Not His Real Name

Though it would be the dopest dope if it was, this talented dude is actually named Josh Tillman. He used to record under his own name, J. Tillman, but he told Interview that he now considers J. Tillman to be the alter ego.

You’ve Probably Heard Him Before

Father John’s first gig was drumming with indie darlings, Fleet Foxes, from 2008 to 2012. He also has a credit on Kid Cudi’s 2013 album, Indicud. More recently, he grabbed headlines when he performed a smartass musical inception by covering Ryan Adams' cover of Taylor Swift's 1989, in the style of Velvet Underground. How’s that for range?

Credited as a satirist, Father John realizes that his greatest strength lies in his tongue-in-cheek sense of humor, and uses that to conjure up the wicked persona he is known for. He is a modern scholar, casually referencing Norman Mailer in this interview with Pitchfork, in addition to formulating his own heady theories on love and persona.

He Has The Freshest Threads Ever

Call him this century's answer to Jim Morrison. I'll get behind any man who believes in pajamas as daywear, as he said in an interview with The Cut.

This scruffy sex symbol is unfortunately off the market. He and his wife, Emma Tillman, have been married since 2013 and are way too cute together. I promise I'm crying tears of joy.

In any case, Father John's music is really all the introduction you need. Without further ado, I present to you the briefest compendium of this musical genius. Do yourself a favor and click on that Spotify playlist at the bottom.

"I Love You, Honeybear"

The titular song off his second album is a visceral look into that sticky mess that we call love. Major props for the exposition of cringeworthy pet names.

Award for weirdest/best love song lyrics: "I wanna take you in the kitchen/Take you in that dress someone was probably murdered in."

A big shoutout to my favorite girl April Ludgate, aka Aubrey Plaza, for maintaining the perfect scowl for the duration of the nightmarish evening depicted here.

A tribute to the utter pain that is NaNoWriMo. Father John knows — he actually did write a novel.

Master of None's Dev may be a fictional character, but you'll still be jealous that he got to see a secret Father John Misty show once you check out the rest of his music.