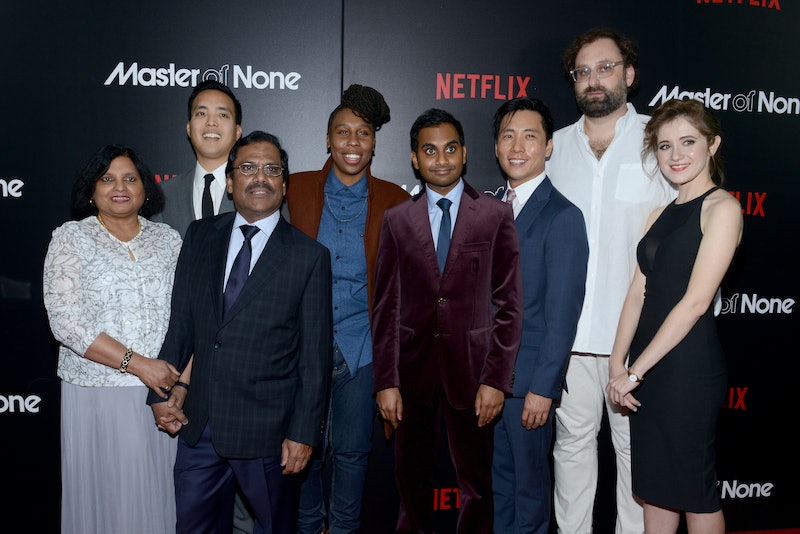 On Friday afternoon, I received an email from my trusty pal, Netflix. The subject line read: "Jamie, we just added a TV show you might like." Inside the message was a plug for Aziz Ansari and Alan Yang's new series Master of None . I knew the show was coming out, but didn't realize how soon. Obviously I immediately watched the first episode, and even after just that one, I could conclude that, as usual, Netflix knows me pretty well. After all, the TV streaming service had seen me through countless Gilmore Girls marathons and the entire series of How I Met Your Mother, so clearly I should really trust its judgment. Soon after that first episode, I was hooked. By Sunday morning, I had watched all 10 episodes of Season 1.

As someone who's seen Aziz Ansari do stand-up and read his book Modern Romance , I was already a fan of the comedian. But after watching the entire show? I think he's brilliant — not just acting-wise, but writing-wise, too. Master of None is like nothing I've seen on Netflix before, and I mean that in the best way possible. It's funny, but also smart; it's realistic, but has its dreamy moments too.

I'm already impatiently waiting for Season 2 (Please tell me there will be a Season 2?!), but if you haven't watched it yet, allow me to explain why you should start ASAP. You don't have to be like me and cram all of the episodes into one weekend, but just a warning, you very well may find yourself doing just that. Here's a list of all the reasons Aziz Ansari's Master of None is must-watch TV.

As far as breaking stereotypes, the "Indians on TV" and "Ladies and Gentleman" episodes hit the nail on the head. The fact that Aziz Ansari's character Dev defies stereotypes (despite the characters he often auditions for) does volumes for diversity.

2. Claire Danes Has A Cameo

In "The Other Man," the former My So-Called Life star makes an appearance. Another notable cameo? Busta Rhymes.

3. There's An Entire Episode About Feminism

I repeat: an entire. Episode. About. Feminism. "Ladies and Gentleman" highlights the everyday sexism that women deal with, and I just want to show this episode to everybody I know who doesn't think we still need feminism. It's spot-on!

4. The Series Is Hilarious

Admittedly, it takes a lot for a show to actually make me laugh out loud. But with Master of None, I couldn't stop LOL-ing.

5. But Also Gets Deep

Quoting Sylvia Plath and The Bell Jar? Wasn't expecting that, but loved every minute of it.

6. It Will Make You Want To Call Your Grandparents

In the "Parents" and "Indians on TV" episodes, different cultures are brought to the forefront of the conversation. Dev and Brian's parents share their immigrant stories and the struggles they faced coming to the country. It's incredibly insightful.

Throughout Season 1, they have their ups and downs. But nothing beats their ghost koalas conversation and honky-tonking in the "Nashville" episode.

9. The Show Breaks The "There Can't Be Two" Rule

In "Indians on TV," Dev talks about the unspoken rule where there can never be two of certain minorities on a show — whether Indians, Asians, gay people, etc. Although he highlights this injustice, the show manages to break these rules, which is awesome.

Not only do Aziz's real parents steal the show, but his brother Aniz Ansari is also a writer on some episodes. Talk about a family affair!

11. You May Recognize Some References To Modern Romance

While it's separate from Ansari's book, there definitely are some overlaps. Fans will recognize the search for the perfect Yelp taco anecdote, along with how dating has changed since our grandparents' days.

12. Harris Wittels Was A Big Part Of The Show

You may notice that the late Harris Wittels' name appears in the credits as the Co-Executive Producer. As Aziz Ansari explained on Twitter, his close friend wrote many jokes that made it into the show.

Parks and Rec fans may be able to recognize that the writer's sense of humor that lives on through this new series. Ansari even said the show is dedicated to him, which is a touching tribute.

13. It's Realistic About Dating

Sometimes dates are great. Other times, your date does a Cartman impression and steals someone's jacket. You win some, you lose some.

14. It Captures The Struggle Of Watching Everyone Else Settle Down

A quick scroll through Facebook and suddenly it seems like everyone you know is getting engaged, tying the knot, or having kids.

15. The Show Is Easily Digestible

Each of the episodes are only about a half-hour long (20-something minutes if we're being exact). This is both a good thing and a bad thing, since you'll be tempted to watch them all at once.

16. It Will Make You Want To Eat Pasta

Dev loves to eat pasta and it will make you want to stuff your face with spaghetti too. Other cravings you may experience while watching? Go-Gurt! I need to grab a Gurt, stat.

17. Or Take An Impulse Trip To Nashville

BRB, going to Google where I can get some of that white BBQ sauce.

18. The Soundtrack Is Fantastic

Paro, the robotic seal, is truly one of the best parts of the show. (BTW these really do exist! They're used to help patients with dementia or depression.)

Sometimes on TV shows, everything falls into place and the characters get exactly what they want. That doesn't happen here, as Dev's acting auditions illustrate.

21. There's A Turtle In A Briefcase

Why is that turtle climbing out of a briefcase? You'll just have to watch the show to find out.

22. It Ends On A Cliffhanger

Nothing made me want to throw my laptop in frustration more than the last few minutes of the finale. What happens next??!!? I need to know.

More like this
The Bling Ring's Alexis Neiers Has Come A Long Way Since Her 'Pretty Wild' Days
By Sophie McEvoy and Arya Roshanian
What’s New On Netflix: Meet 'The Real Bling Ring'
By Arya Roshanian
Jinkx Monsoon Is About To Get Real Sketchy
By Sam Ramsden
Kenan Thompson Pointed Out A Super True Detail About 'Friends' In His Emmys Monologue
By Grace Wehniainen
Get Even More From Bustle — Sign Up For The Newsletter