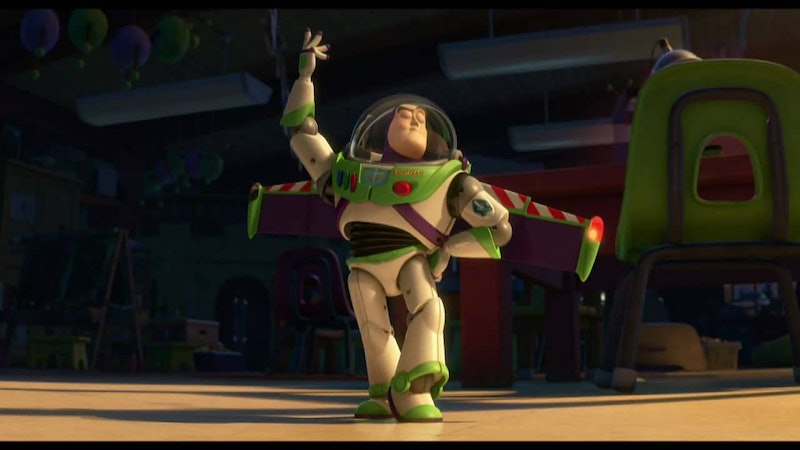 It's a given that Pixar films are a treat for the eyes. Whether homing in on the colorful world of a child’s bedroom or the empires that lay beneath the Pacific — to which we'll be lucky enough to return in Finding Dory — the animation house has built its reputation on the painting of beautiful pictures. But Pixar doesn’t get quite enough credit for its handiwork in the music department. The original scores and ditties of the studio’s stable of composers, not to mention its occasional appropriation of existing tunes, have made for a collection of some of the most memorable movie music of the past two decades.

Of course, while each Pixar movie has graced us with amazing harmonies, some films have managed musical themes a bit more iconic and memorable than those of their brethren. Case in point: While everybody can tell you the name, and most likely rattle off a good bunch of the lyrics, of Toy Story's premiere ballad, we might have a hard time recalling how the Cars theme goes.

Here's a swift look back at the musical efforts of Pixar — those that will live happily in our minds forever, as well as those that YouTube may need to help us all remember.

Pixar's favorite trilogy is easily the one with most recognizable tune, "You've Got a Friend in Me." Composed by Randy Newman, the folksy, almost insistently square little number perfectly embodied hero Woody's sweet, often sad story of devoted friendship to old pal Andy and, as the movie carries forth, new buddy Buzz.

Much like A Bug's Life itself, Newman's score and central theme, "The Time of Your Life," doesn't quite hold quite the same place in our hearts as does "You've Got A Friend In Me." While the vocal stylings of Randy Newman might have reminded us of "You've Got a Friend in Me," such comparisons only really served to highlight how lackluster the Bug's Life theme seemed.

Trying his hand at something a little jazzier, Newman came up with the friendship ballad "If I Didn't Have You." In keeping with the tone of Monsters, Inc., the song is markedly sillier and livelier than that of Toy Story or A Bug's Life, and, what's more, was the first Pixar theme to employ the vocal stylings of its movie's main characters. While the song didn't quite earn the legacy that "You've Got a Friend in Me" holds, it sure suited its beloved, zany picture well enough.

For a long while, the undersea epic stood alone among its Pixar brethren in one regard: the use of a musical number that already existed, Bobby Darren's "Beyond the Sea," to act as de facto theme. Yes, composer Thomas (not Randy) Newman wove a bona fide theme into his score for Finding Nemo — and a great one to boot — but, as proven by the trailer for Finding Dory , it's the old standard that we think of when we think of Pixar's fish tale.

In step with Cars' supreme commercial values was the choice to hire a popular recording artist to write an original song for the film. Sheryl Crow penned and performed "Real Gone," a country rock single, to accompany Randy Newman's wordless score. It's catchy enough, but not exactly "If It Makes You Happy."

While Toy Story boasts the most recognizable song of the bunch, Ratatouille claims (for my money) the very best musical number yet to accompany a Pixar film... and, really, to accompany just about any film in the past 10 years. Giacchino returned with "Le Festin," an accordion-backed number, accompanied by the vocal stylings of French singer Camille. Like Ratatouille, it is gentle, sophisticated, and incredibly confident in its eccentricities. Giacchino and Camille's musical collaboration is part of what makes Ratatouille arguably the best Pixar movie to date.

As he did with Finding Nemo, Thomas Newman lifts the magic of Wall-E with a highly serviceable score. But once again is Newman outshined by the musical stylings of old, as the sci-fi epic benefits from the charms of of a 1964 show tune: "Put Your Sunday Clothes On" from Hello Dolly! The delightful marriage of the old school "Put Your Sunday Clothes On" and the space-aged Wall-E is just a small part of what makes the movie great on the whole: the perfect balance of its characteristics across a wide, wide spectrum.

In some ways, Up relies more on its music than any other Pixar movie. Its entire opening sequence is a wordless, musical montage, and, furthermore, one that takes us through some of the most emotional highs and lows of the Pixar canon. The Giacchino number's ability to float from bouncy and bubbly to drastically somber is a testament to his ranking as Pixar's greatest musical asset, and to the emotional ambition of Up on the whole.

Musically speaking, Brave operates more like a traditional Disney film than it does like a Pixar movie, using a far more adventurous score and allowing its characters to sing their feelings. (Listening to the score, you're more inclined to think back to Pocahontas or Mulan than you are to Toy Story or Monsters, Inc.) Brave broke from its usual corral to bring in Patrick Doyle and the London Symphony Orchestra, not to mention a whole mess of bagpipes, contributing to the distinct feel of the Scotland-set picture.

Appropriately, Inside Out's score (one more by Giacchino) feels a little more intellectual than most of Pixar's themes. If you still haven't seen this recent masterpiece, the music is just a little taste of how affective the picture dares to be.

Though not every Pixar score or theme is an unforgettable gem, the studio and its musical team can be heralded as the purveyors of some exemplary melodies. Whether your preference be Randy Newman, Thomas Newman, Michael Giacchino, or, well, Sheryl Crow, Pixar has doubtlessly left you tapping your feet at one point or another.