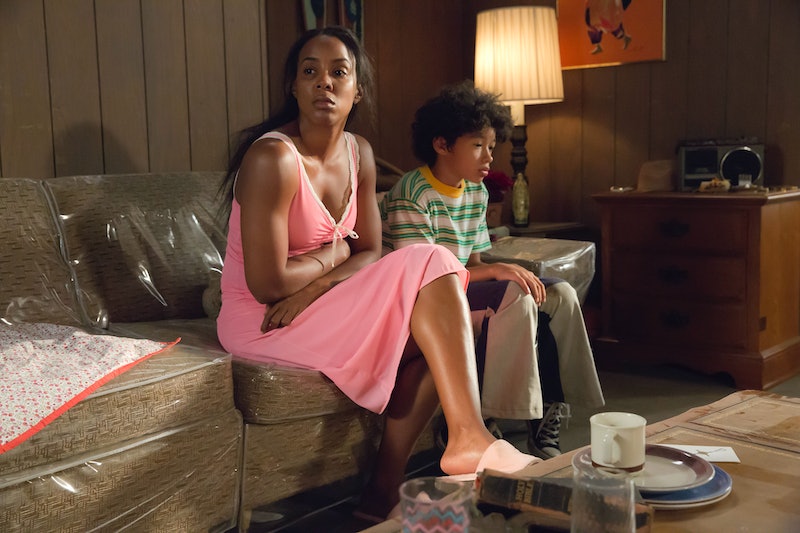 It has taken a season and a half to learn about Lucious' past on Empire , but the layers of his childhood are slowly being revealed. Throughout Season 2, scenes of Lucious' childhood with his mother have suggested that his mom was mentally-ill, which was further supported in the most recent episode of the show. After flashbacks showed a young Lucious hiding bullets from his mother, it seemed that Lucious' mother (Leah) at one point, held a gun to her head in front of her son. So what happened to Lucious' mom on Empire ? Several things have been suggested throughout the series' run, and hopefully more will be discovered as the season progresses.

After a few rather confusing scenes where a young Lucious took a bag of bullets and buried them in the backyard, it seems that he was doing so to protect his mother from herself. At the end of "True Love Never," Leah took a gun and held it to her head and repeated "boom, boom, boom, boom," while young Lucious looked on. Talk about scarring. While we didn't see what the outcome of that scene was, we do know that it ignited an emotion in Lucious, which allowed him to let down his wall and really open his heart in his song with Freda Gatz.

So what happened to Lucious' mother? Terrence Howard teased that fans would learn about a tragedy that occurred in Lucious' childhood. That, plus his mother holding a gun to her head makes me believe that Leah possibly killed herself when Lucious was young. He's referred to himself as an orphan before, which would make sense if he felt abandoned by his mother.

We haven't seen Lucious' mother in the present day of Empire Entertainment, which also raises question of where she is. Lucious undoubtedly has a lot of secrets he keeps from the majority of people, but I'm hopeful that he finds someone to open up to and comfort him — if he so seeks it. At this point, it seems like this person could be Freda. Lucious has said that he relates more with Freda than he does his own son, and sometimes you find friends in the strangest ways (never forget that Lucious had Freda's father killed).

Either way, let's hope we end up with more answers regarding Lucious' mother and his childhood. Lucious is usually a very hard to read person, and it would be nice to see the softer, more vulnerable Lucious... even for a second.

More like this
Gabourey Sidibe Wore A Traditional West African Wedding Dress On The Cover Of Brides
By Dominique Norman
What Happened To The Real Sean Suiter From We Own This City?
By Kadin Burnett
When Was 'Bling Empire' Season 2 Filmed?
By Alyssa Lapid
Cherie & Jessey's Relationship Timeline Is As Complicated As It Seems On 'Bling Empire'
By Brad Witter
Get Even More From Bustle — Sign Up For The Newsletter