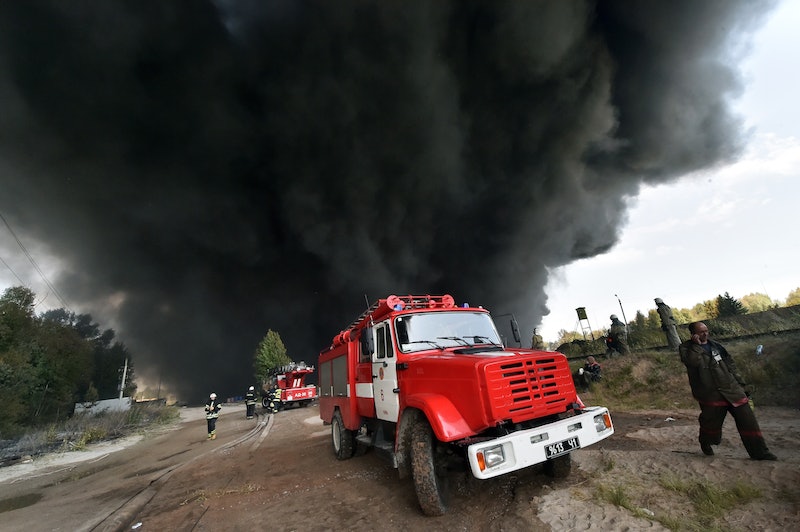 A small plane crashed in Akron, Ohio, on Tuesday, killing all 9 people on board including two crew members. The flight was close to landing when it veered left, cut down a number of power lines, and crashed into an apartment building in a residential area called Ellet. Now, families of the victims are wondering why the Akron plane crashed.

Unfortunately, as of Wednesday night, no definitive answers are available. Investigators have not found evidence of any distress on board the flight, according to NBC News. A federal investigation will focus on weather conditions as a possible cause for the crash. Conditions in Akron at the time of the crash were gray and foggy, creating low visibility. Weather Channel meteorologist Quincy Vagell told NBC News that given those conditions, "outside of a controlled runway landing, getting a plane down safely in an emergency would have been a very tough task."

The airport at Akron does not have a control tower and no air traffic controllers, The Sun Sentinel reports, so pilots communicate with one another via a special frequency.

Augusto Lewkowicz, president of ExecuFlight, the company that owned the plane, told CNN that the aircraft had been in good condition. The staff on board were experienced and well-trained, so he is perplexed over what happened on Tuesday. "You can't really prepare for this kind of stuff. This is the lottery ticket that nobody wants," he said. "We don't know what happened. But we know that we will know what happened soon... Planes generally don't fall out of the sky."

The seven passengers on board the flight were from Boca Raton, Florida, and were employees of a small real estate firm called Pebb Enterprises. "We are shocked and deeply saddened for the families, colleagues and friends of those who perished," the company said in a statement via its website. "Our first priority is to give our fullest support to the family members and loved ones of our co-workers." The pilot and co-pilot also died in the crash.

The 10-passenger aircraft departed from Dayton and crashed about two miles from the Akron International Airport as it was close to landing. It smashed into a four-unit apartment building, though luckily no one was inside at the time, CNN reports. There was extensive property damage, however. When she heard about the crash, "I was just in shock, and I was crying and upset," said Beth Montgomery, one of the residents of the apartment building. "I lost everything." Twelve families are displaced as a result of the plane crash, according to the Sentinel. They are receiving aid from the Red Cross.