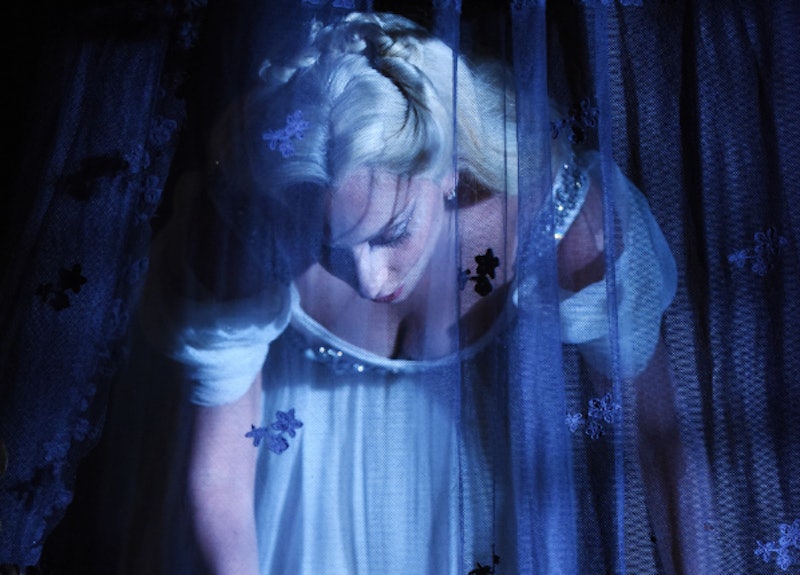 Ever since the season first premiered, viewers have been dying to know who's inside of Room 33 on AHS: Hotel. And it's that very question that came to the forefront during this week's episode of American Horror Story: Hotel. You see, it turned out to be the living quarters of Lady Gaga's biological son, Bartholomew, who was apparently born just three weeks after inception. But even though the hour basically centered around this pivotal storyline, we still know very little about who this infant is, why he's so violent, and whether or not he possesses any supernatural abilities like his mother. (Aside from the fact that he clearly can't age.)

In fact, it took almost the entire episode before we actually got a chance to gaze upon the baby firsthand. (Before then, we'd mostly experienced things from his point of view.) And while it only lasted a moment, many viewers are under the impression that we should recognize this character from Murder House. Some think he's the Infantata, while others are questioning if he's somehow a younger version of Constance's son, Beauregard Langdon. However, this simply would not make any sense. Both Murder House and Hotel are taking place in the modern age, so there's just no way he could be both an infant and the (now deceased) grown man we saw living in Constance's attic.

As for the Infantata prediction, I'd have to surmise that it's another dead end. That character has haunted my dreams since Season 1, so I would've known if I was looking upon him once more. No, the way I see it is that this child is a completely new (and extremely murderous) character that we've never met before.

I can't deny that I was somewhat disappointed. I was hoping for a much bigger Murder House connection than just the fact that The Countess went there to see Dr. Charles Montgomery. I thought the character itself would harken back to those hallowed halls we came to both love and fear. But hey, on the bright side, at least my Infantata nightmares can now be replaced with whatever this new creature is. Thanks, Ryan Murphy. Who needs sleep?