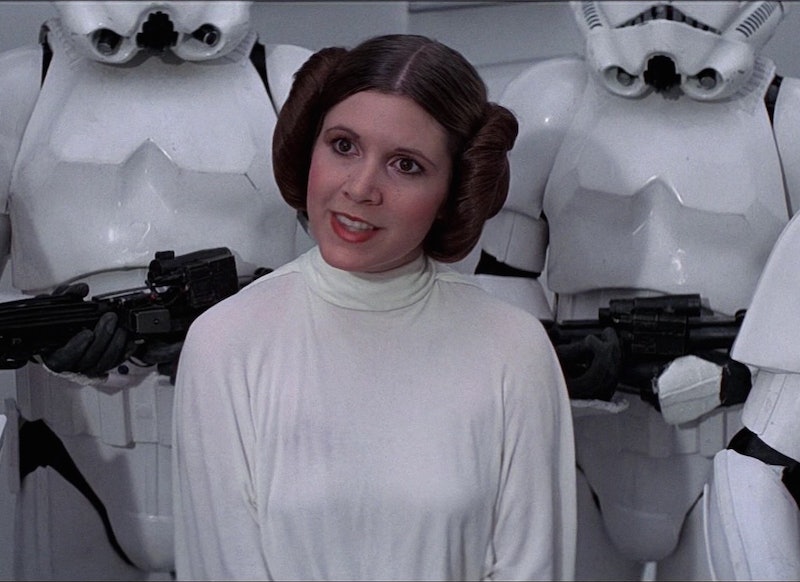 I know that Princess Leia already had an entire generation of people, and entire next generation of people, going "YASSS, QUEEN," but get ready to do it again. As one of the few and most prominent female leads in the entire Star Wars franchise, Princess Leia was our first introduction to feminine badassery in the original trilogy and she shows no signs of slowly down in the upcoming Star Wars: The Force Awakens film. However, you're going to want to give that whole princess thing a rest, because that's not the title that Leia is going by when Force Awakens rolls around. According to The Huffington Post, Leia goes by the title of General in Force Awakens. Princesses are for (other) Disney movies, I guess.

"She’s referred to as General,” said director J.J. Abrams. "But... there’s a moment in the movie where a character sort of slips and calls her ‘Princess.’" Please, please, tell me that it's Han Solo, and that it's an affectionate nickname, and that this doesn't stop her from smacking him for calling her that in public when she is a General now. (My heart and soul lives for Han and Leia sass moments, OK? I have a weakness, and they are it.) However, being known as the General isn't the only challenge that Leia is facing in The Force Awakens. "The stakes are pretty high in the story for her, so there’s not much goofing around where Leia’s concerned. But it felt historic to have her, especially with Harrison, back in scenes together. I can only imagine the baggage that they bring to it, I’m just a fan who loves this stuff, but they’ve been living with it — and living in it — since ’77.”

Right, but this is not about my Han and Leia feels. This is about Princess Leia, and how empowering it is that princess isn't the only title that she's carting around anymore. Honestly, I'm not critical of the word "princess." As much as the debate about how feminist the idea of disney princesses is, I love princesses — Disney and otherwise. As a princess, Leia was a leader. She was responsible for the lives and laws and safety of Alderaan. She was a member of the Imperial Senate. She was a rebel and a hero. Having the title of princess was empowering for her, not indicative that she likes to wear fancy dresses and be rescued by princes all day. However, the title of General is empowering in a different, arguably better way for a princess that's often left out of the Disney line-up even now.

A General conjures up images of an older man commanding troops into battle — the position still being overwhelmingly male, at least in the U.S. Army — and, instead, you're going to have to take the title and conjure up images of Carrie Fisher in full Leia regalia. Because a futuristic sci-fi adventure like Star Wars is acknowledging that it doesn't have to be trapped in the present reality of earth when it comes to its high-ranking military officials among the main cast. It's acknowledging that the princess that we all grew up with, the female figure that girls who love Star Wars have idolized all of these years, can become a General, can spur an entire new generation of girls who are into Star Wars into breaking that glass ceiling and aspiring for even more beyond becoming princesses. It's ensuring that little girls everywhere know that they can do both, that they can do both.

If Leia can make a well-known scoundrel like Han Solo fall in line, then the rest of the universe is really no problem. But, even if she didn't have that distinction, Leia would have no trouble being a commander, having lives on the line, and taking control of a crisis situation. Although Fisher states that General Leia is "solitary. Under a lot of pressure. Committed as ever to her cause, but I would imagine feeling somewhat defeated, tired, and pissed," I'm not worried. Leia has been killing it since Episode IV, she's been killing it through all of the supplemental Star Wars media, and clearly she's not slowing down on doing it just because the force has awakened. As if we needed more reasons to be excited to see this film.